The mystery of the ‘Spoliarium’ ‘boceto’: Is it real? | Inquirer Lifestyle 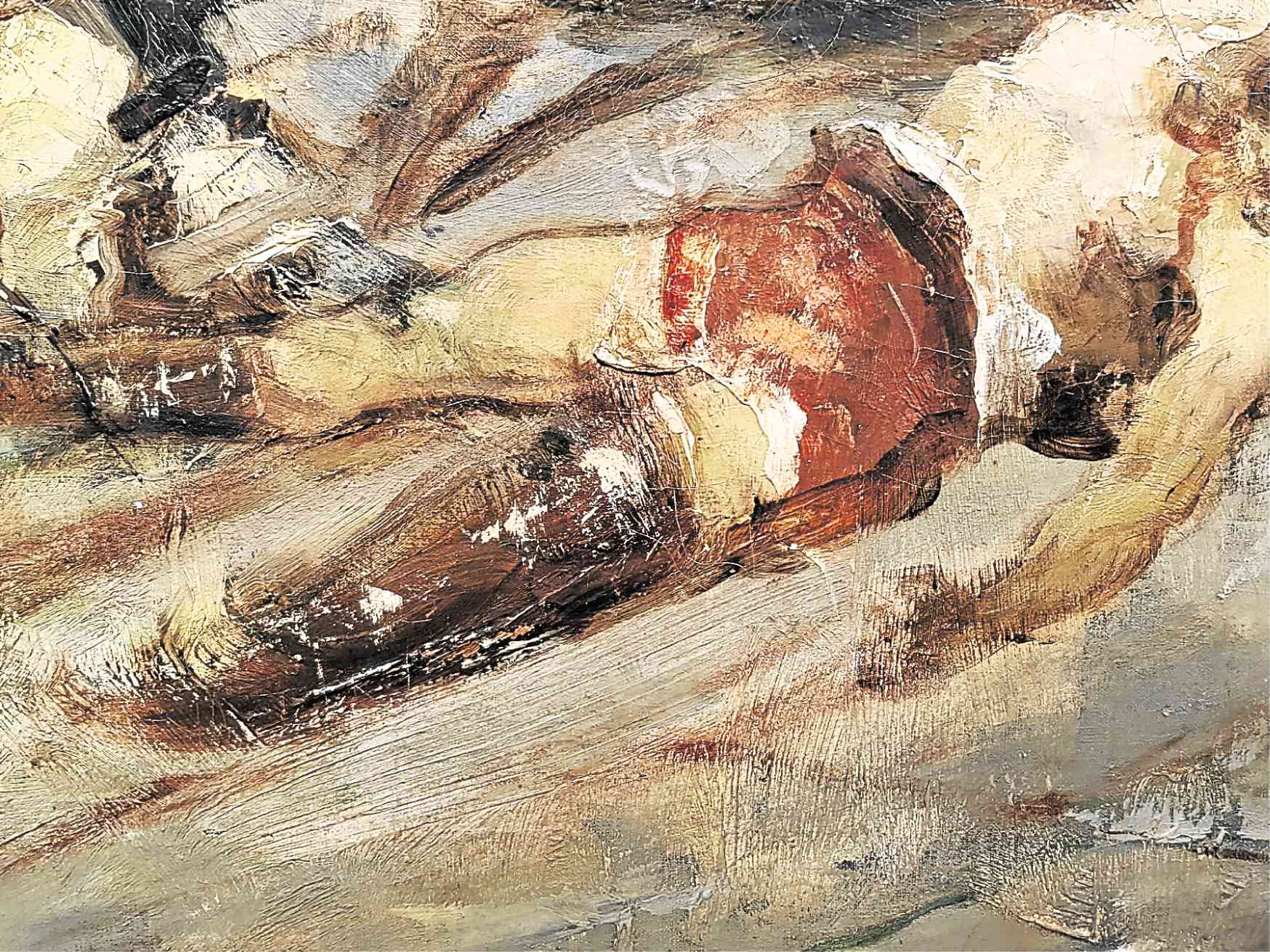 Detail from Juan Luna’s “boceto” of the “Spoliarium” —DEXTER MATILLA

The mystery of the ‘Spoliarium’ ‘boceto’: Is it real?

Juan Luna’s “Spoliarium” is probably the most famous painting in the Philippines. Completed in Rome in 1884, it won a First Class medal in the Madrid Exposition of Fine Arts, the same exhibition that awarded Felix Resurreccion Hidalgo’s “Jovenes cristianas expuestas al populacho” (Christian maidens exposed to the mob) with a Second Class medal.

For this artistic triumph, besting Spanish artists at their own game, Luna and Resurreccion Hidalgo became, overnight, the pride of the Philippines, imparting their countrymen with the same pride we feel today when Pacquiao brings home a boxing belt or Pia Wurtzbach, a beauty queen’s crown.

The year 1884 was when the names of Luna and Resurreccion Hidalgo were inscribed in Philippine art history. Their lives and art fused in a nationalist project that made them not just artists but patriots, revered today as national heroes.

Luna’s “Spoliarium” is a work of epic proportions, a scene from history, favored by Academic painters and salons in 19th-century Europe. It depicts a scene from ancient Rome, when the corpses of fallen gladiators were dragged down into the bowels of the Roman Coliseum to be stripped of their weapons, armor and clothing before being discarded as dead meat to grieving friends and relatives.

In this gloomy scene of death and desolation, Jose Rizal, Graciano Lopez Jaena and other patriots read the sorry state of colonial Philippines. Unfortunately, the flowery words and lofty aspirations from the 19th century sound hollow to millennials who have seen the movie “Gladiator” or other sword-and-sandal flicks, and are hard-pressed to see the connection between ancient Rome, 19th-century Philippines, and their own times. Yet teachers and textbooks tell us what to see in “Spoliarium,” a painting inextricably linked with the emergence of the Filipino nation.

Early this week, Salcedo Auctions director Ramon Lerma held a press conference to unveil a  boceto or study of the “Spoliarium,” its discovery hyped to be an important milestone in Philippine art history. Reactions from the arts and culture community were mixed, with many asking, “Is this for real?”

Salcedo has had the good fortune of selling two previous Luna works: Luna’s copy of “Aesop” by Velasquez for P17.5 million in 2014, and “A Do… Va la Nave?” for P46.7 million in 2015. Unfortunately, Salcedo’s winning streak suffered a setback in 2016, when a portrait of a cute girl, listed as a work by Resurreccion Hidalgo, was exposed as done by a Belgian painter. If accepted unanimously as authentic, the “Spoliarium” boceto will redeem the auction house’s reputation.

In March 2018, I was consulted by Salcedo on a “Spoliarium” boceto being offered for auction. I requested the standard photographs of the front and back of the painting, as well as its provenance or a narrative of the painting’s history. What was shared in confidence, pending negotiations with the anonymous seller, was that the boceto came to them as a gift, from a Franco-era politician who had served as Spanish ambassador to the postwar Philippines.

This unnamed politician had a collection of works by Luna and Resurreccion Hidalgo in his office, all acquired in Manila and brought to Spain at the end of his term. I asked for better pictures and a storyline I could work with to trace the painting as far back as possible to Luna himself. The matter was dropped until a few days before the Aug. 30 press conference, when the actual painting was shown to me in Manila.

This time the story is more complicated, but with names that can be checked. At the end of the line is a certain Xose Vazquez Castiñera, who had served as mayor of a town in northwestern Spain called Sarria, who passed it on to Francisco Vasquez Gayoso and his wife Maria Nuñez Rodriguez. The childless couple then passed the painting to the present owner.

From this, Salcedo did some sleuthing that would make Sherlock Holmes pale in comparison. They discovered during a visit to Sarria that across the street from the Castiñera home was the birthplace of Matias Lopez, the Chocolate King of Spain, a man of prominence who allegedly declined a dukedom.

When it was discovered that Lopez served as the Commissioner of the Spanish Pavilion in the Paris Universal Exposition of 1889, where Luna and Resurreccion Hidalgo exhibited paintings, Salcedo connected the dots and suggests that Castiñera acquired the boceto from Lopez, who in turn obtained paintings by Luna and Resurreccion Hidalgo in exchange for cash, or these were presented to him as gifts by the grateful Filipino painters.

Pending conclusive evidence to support the storyline above, we are left with the actual boceto now in Manila, and open to more rigid examination. While two Manila-based conservators have evaluated the painting’s physical condition and stability, their work is hampered by the fact that the painting has been reframed, relined, cleaned and conserved before it was sent to Manila for auction. To know its original state, we need a full report on its restoration, and the procedures undertaken to bring it to its present state.

With a few differences in composition, color and detail, the boceto generally resembles the finished painting in the National Museum. It is clearly identified as a “boceto”; dated “R[ome]1883”; signed in block letters in the now iconic “LVNA”; and curiously, has two baybayin characters, “bu” and “la,” that spell out BULA[n], the Ilocano word for “moon.” Luna is the Spanish word for moon. This is only the fourth painting, to my knowledge, that carries a baybayin signature.

The boceto has to be compared with three “Spoliariums”: the original in the National Museum, and two copies made by Luna himself. One is in a private collection. The second remains unlocated, but should, if extant, be somewhere in Russia, commissioned by a Russian nobleman while the original was still hanging in the Madrid Exposition of Fine Arts.

Doubters cannot be convinced, and believers need no convincing. Discovery and repatriation of the “Spoliarium” boceto brings more questions than answers. It forces art historians, connoisseurs, curators, collectors and dealers to rethink, and probably revise, what was known about Juan Luna and his art.

Unfortunately, proper study cannot be undertaken in the two weeks before the boceto goes under the hammer to disappear into yet another private collection. However, with a full, high-resolution scan, a competent condition report, and further primary source research, we can still piece together its true story, and unlock its secrets.