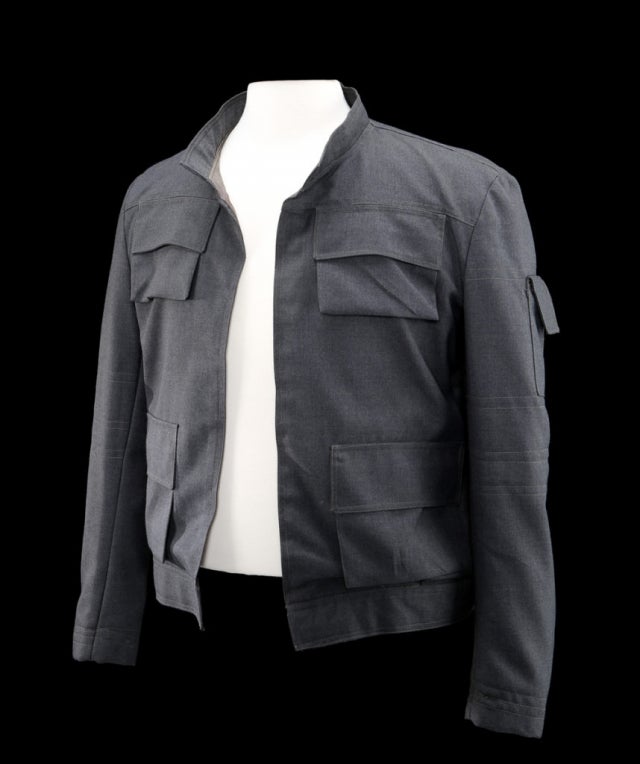 Han Solo's jacket from 'The Empire Strikes Back' (1980). Image: PropStore Auction via AFP

Han Solo’s jacket from “The Empire Strikes Back” and Indiana Jones’ signature hat top off some dazzling movie memorabilia that went on display in London on Thursday before being auctioned later this month.

More than 600 props and costumes from film and television, including Marty McFly’s hoverboard in “Back To The Future Part II”, will go under the hammer in the British capital on September 20.

Around a third of the rare and unique lots can be viewed at the BFI IMAX complex ahead of the bidding.

“We’ve got some of the best (items) from the pinnacle of all the films,” said Sian Taylor, project manager at organizer Prop Store — name-checking seminal franchises from ‘Star Wars’ and ‘Batman’ to ‘The Terminator’ and ‘The Lord of the Rings.'”

The film memorabilia seller has held the annual auction since 2014, and expects this year’s collection to fetch a record £3.5 million ($4.6 million, 3.9 million euros).

“It’s just getting bigger and better… and it’s a very good year,” Taylor told AFP of the 2018 crop.

It is expected to be the highest-selling lot and fetch up to £1 million.

That would smash Prop Store’s previous record of over £300,000 paid for the motorbike from several “Batman” films.

Meanwhile Ford’s signature fedora in the Indiana Jones franchise debut “Raiders of the Lost Ark”, and his bullwhip from 1984’s “The Temple of Doom” are also featured.

The hat, crafted by famed Italian milliner Borsalino, is set to sell for £300,000.

For potential buyers on a lower budget, the multi-coloured hoverboard ridden by Michael J. Fox in the “Back to the Future” sequel could fetch between £30,000 and £50,000.

Not just for rich people

Taylor said bidders range from film enthusiasts to investors — and insisted the sale caters to all categories of wealth.

“It’s not just for rich people. There are entry-level pieces,” she added, noting crew jackets from movies could go for £200.

Britain’s leading children’s charity the NSPCC will receive all the proceeds from the sale of a Stormtrooper helmet from “Star Wars: Episode VIII — The Last Jedi”.

US costume designer Michael Kaplan recently donated the item, which is priced at £30,000 to £50,000, to the organization.

“We wanted obviously to maximize the amount of money we could get so we’re really excited to be involved,” said Charlie Porter, NSPCC senior partnerships manager.

Other classic movie items available include the robe worn by Brad Pitt’s Tyler Durden character in “Fight Club”, a Wonka bar from “Willy Wonka and the Chocolate Factory” and Johnny Depp’s unique costume in “Edward Scissorhands”.

Prop Store acquires its wares from movie studios, crew members and other collectors around the world, according to Taylor.

This year’s sale saw props and costumes coming from as far afield as Norway, the United States and Brazil.