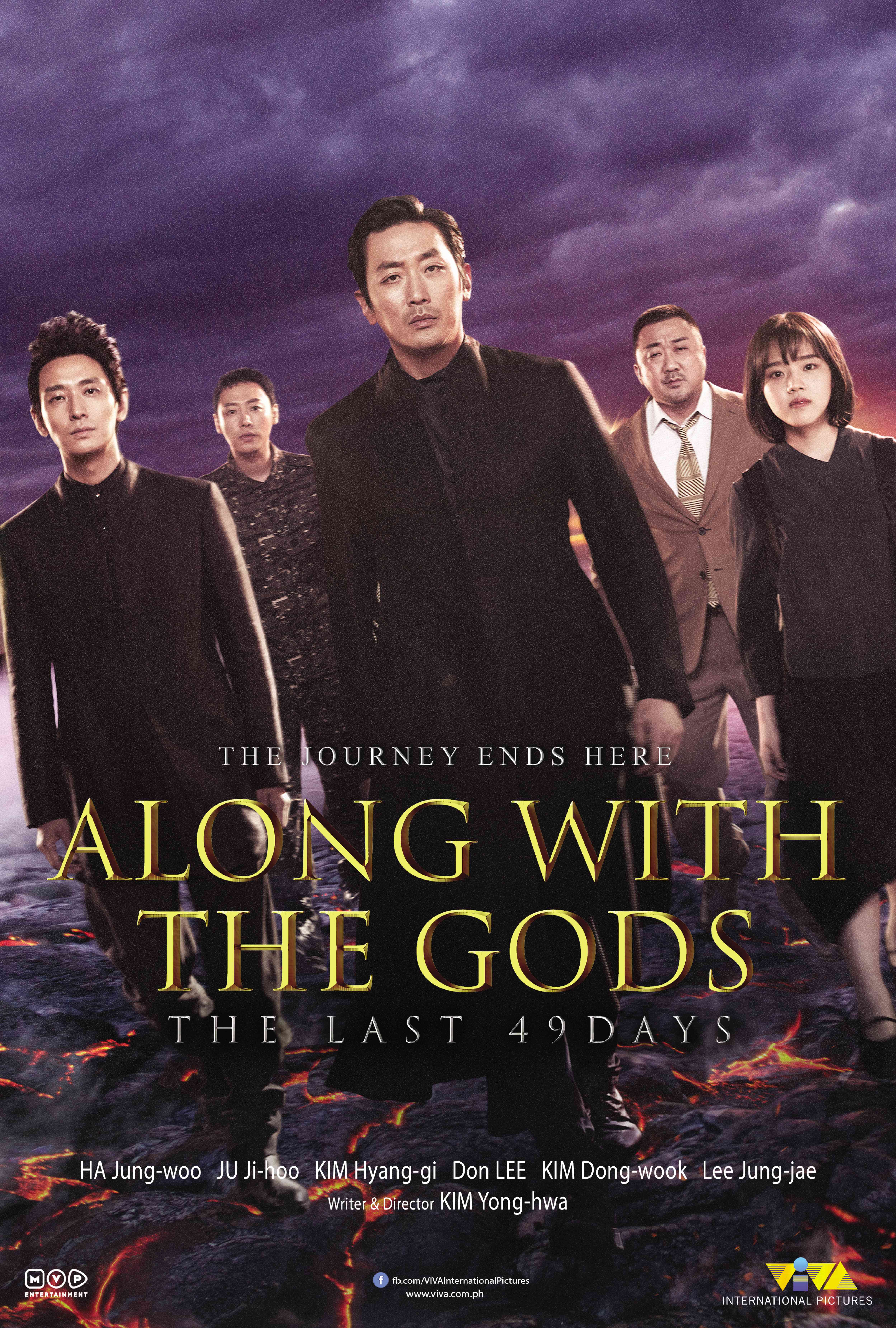 Can’t move on with karma

Karma is a bitch, especially if you have skeletons in the closet that you want to keep hidden. Or, as in the story of “Along with the Gods,” the buried remains of a soldier whose spirit can’t move on and reincarnate without undergoing trial in the afterlife.

Possible spoilers if you haven’t seen the first film.

“Along with the Gods: The Last 49 Days” begins where the first film ends: grim reapers Gang-lim (Ha Jung-woo) and Haewonmak (Ju Ji-hoon) are attacking the soldiers of the god of the afterlife, Yeomra (Lee Jung-jae), whom they seek to present their 49th paragon spirit, the soldier Soo-hong (Kim Dong-wook.) It’s not the usual way to do things, but to successfully reincarnate their 49th honorable spirit would be their only chance at being reincarnated, too.

However, Yeomra thinks that the vengeful spirit of Soo-hong is already condemned to be destroyed, but Gang-lim is convinced that the soldier is a victim of circumstances and deserves to undergo the trials.

In the living world, Haewonmak and Deok-choon are surprised by the appearance of house god  Seongju (Ma Dong-seok) protecting the elderly Choon-sam and his grandson Hyun-dong (Jung Ji-hoon.) While dealing with Seongju, the grim reapers learn about their ancient past.

Back in the underworld, it seems that Soo-hong’s trials are meant for another purpose aside from releasing him from hell: The more details on Soo-hong’s past life are revealed, the more it appears that Gang-lim’s past is the one being judged.

And so Part Two becomes the story of the three grim reapers. I didn’t really expect this twist, since I assumed that the sequel will only deal with the story of Soo-hong, since Soo-hong’s story already began in the first film.

But first, a brief recap of Part One and how the grim reapers came upon Soo-hong:

In “Along with the Gods: The Two Worlds,” ordinary fireman Ja-hong (Cha Tae-hyun) dies from an accident while saving a fire victim. The three grim reapers accompany him across the underworld, in order to successfully pass the trials in each realm of hell: Murder, Indolence, Deceit, Injustice, Betrayal, Violence and Filial Impiety. Ja-hong’s spirit is of a special kind, a rare paragon who led an honorable and just life that his spirit is expected to pass through the trials with ease and reincarnate immediately.

An attack by hell hounds at Blade Forest indicate that a spirit related to Ja-hong has become vengeful. Gang-lim leaves the underworld to investigate, leaving the two grim reapers with Ja-hong.

Gang-lim discovers that the vengeful spirit is that of Soo-hong, Ja-hong’s underachieving brother. In the process of apprehending the violent spirit, Gang-lim learns about Soo-hong’s life as a soldier, as a brother to Ja-hong and as a son to their mute mother (played by Ye Soo-Jung.)

Each of Ja-hong’s sins is examined through the Mirror of Karma and in each instance, it would seem that Ja-hong was not an honorable person. But each time, the grim reapers successfully defend Ja-hong, whose only crime was to love the people he cared for. Ja-hong is immediately reincarnated. Afterward, we find the three grim reapers and Soo-hong in the desert facing Yeomra’s army.

Obviously, both “The Two Worlds” and “The Last 49 Days” have lengthy, twisty, choppy narratives that could easily confuse anyone. Lucky for us Filipinos, we’ve become accustomed to K-drama tropes dealing with destiny, grim reapers and magic swords that AWTG’s narrative is relatively easy to deal with.

The second film shares many themes with the first—family relations, cause and effect, fate and karma, motivations and the consequences of all actions while still alive.

The first film progressed toward the next realm of hell in order to establish the root of Ja-hong’s story beginning from Murder and ending in Filial Impiety.

The second film runs almost reverse, beginning in the trial for Filial Impiety and ending in Murder—but not strictly about the life of Soo-hong. In the course of dealing with Soo-hong as a vengeful spirit in the living world and as a spirit that must stand trial in the afterlife, Gang-lim violated a number of rules in the spirit world. By the time Gang-lim stands accused of violations, it has become obvious that Su-hong’s death is connected to the past life of Gang-lim, and that the past lives of the three guardians are intertwined.

Both films are populated by an incredibly talented ensemble of character actors, their performances helping to sell what could easily have been a corny fantasy film in amateur hands. The addition of Ma Dong-seok as the endearing house god Seongju is just icing on the cake.

Two characters linked to the story of Soo-hong that are in both films are worth mentioning just a bit, because too much might spoil the story.  Private Won Dong-yeon is ably played by EXO boy band member Do Kyung-soo, while TV character actor Lee Joon-hyuk plays Dong-yeon and Soo-hong’s superior First Lieutenant Park Moo-shin. I’m aware that D.O. has appeared in several TV dramas, but he plays the disturbed rookie soldier here quite well.

Ju Ji-hoon is pitch-perfect as the filter-less assistant grim reaper Haewonmak, throwing more funny punch lines here in the second installment. In the same sense, one can say that the second film—by turning the story toward Gang-lim and the other grim reapers—has less melodramatic tendencies compared to the first. Lead actor Ha Jung-woo’s character may be a focus in this story, but doesn’t require to show much externally. So much of what Gang-lim goes through is internal, and Ha performs this really well.

But the real mention here is Kim Dong-wook as the spirit-on-trial Soo-hong. His character arch stretches long from the first film as a jealous brother to a dear best friend to a vengeful spirit, to the second film where he goes from cocky ingrate to restored human. Impressive display of versatility in these two films.

The director’s effects company Dexter Studios—responsible for the film’s fantastic creatures and sweeping aerial vistas reminiscent of Peter Jackson’s “The Lord of the Rings”—may not be equal to Hollywood’s best, but it seems that they’re getting there. Both films are CGI visual-effects heavy. While the first film showcased the various landscapes of the different regions of hell, the second film sometimes would add things that seem unnecessary, like the dinosaurs in the desert of fear. The scene is mildly funny, but the dinosaurs seem to be there just for the sake of it. I do like all the ancient Korea scenes.

You’ll either like Part Two better because it has more character backstories, but you can also like the first one more because it speaks more about the immediate family—particularly devotion to parents—culturally pervasive in Asia.

“Along with the Gods” is the director’s affirmation of what is common to all religions: the dignity of the human soul. That no human is inherently evil, and sins are either paid for or forgiven in this life or the next. The film’s mythology might be a mix of Chinese, Korean and South Asian influences, but penance and the idea of supreme judgment are shared with Christians as well.

“Along with the Gods: The Last 49 Days” is a fitting companion to the first film—a crowd-pleasing spectacle of visuals and epic storytelling, peppered with humor and punctuated by emotional moments that explore the light and dark sides to our humanity.

As in the first film, the second ends with a teaser for the possible next chapters of the AWTG saga—the way the filmmakers twisted the narrative this time, who knows what we’ll see in the next installment.