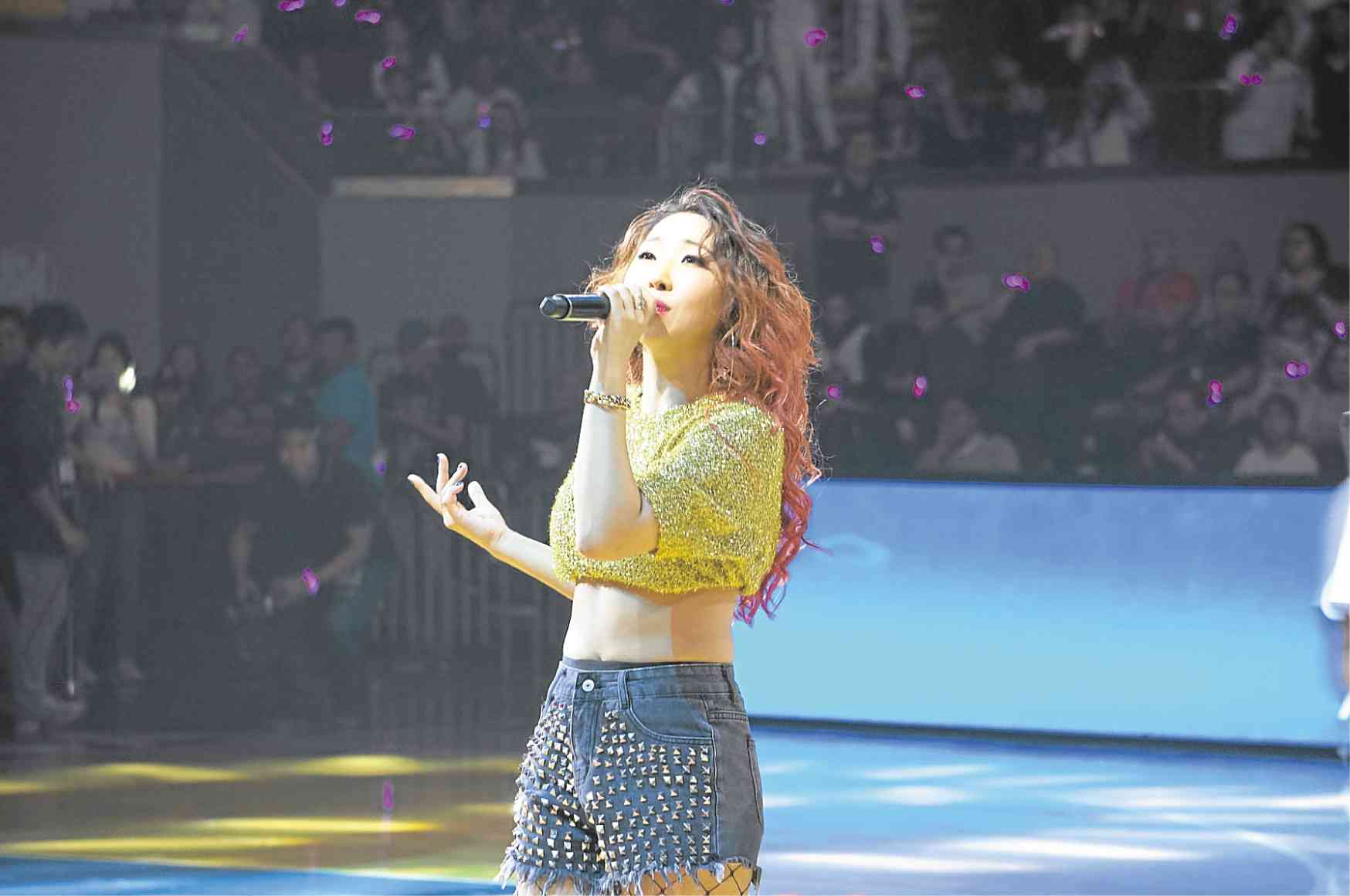 Minzy took a break from her energetic performance by singing “Come Back Home” as a ballad.

K-pop has a place in anyone’s heart. The opening ceremony of Season 81 of the UAAP is a clear testament of that. One of the treats that host National University prepared for the students and fans was the performance of South Korean singer, songwriter and former 2NE1 maknae (youngest) Minzy.

The lights went out before she came out on the middle of the court. The LED bracelets that were given out at the gates earlier became the ocean of light that welcomed the K-pop star. There were also a few fans on the gallery who waved their official 2NE1 lightsticks. The heart with wings stood out the most and so did the Blackjacks (fandom name) that carried them.

“Hi Philippines, Mabuhay! I am so happy to be here. How are you guys feeling? Did you guys miss me? I missed you so much. I remember when I was with Dara during the 2NE1 tour in 2014. I love the Philippines. I have great memories here. Thank you so much, mahal ko kayo,” Minzy said after she performed “Ninano.”

The song is a single from her album “Minzy Work 01: Uno.” This is her first album since her departure from YG Entertainment and her former girl group 2NE1. The album peaked at number 2 on the Billboard charts on the week of its release.

Another single worth noting in that album is the track “Superwoman.” Minzy speaks in the song how she got so tired she almost gave up but instead she endured. One cannot begin how grateful fans were that she did.

The artist then proceeded to serenade UAAP fans with the song “Come Back Home.” This is from 2NE1’s second full-length album “Crush.” But instead of the original mix of reggae, hip-hop and R&B, she performed it as a ballad.

The crowd went silent to listen to her powerful vocals. Her voice had a soothing effect. It was a break from the electrifying “Ninano.” She earlier asked her microphone to be changed so she could be heard properly.

“You guys are so fantastic,” she told the screaming fans before she introduced her final song, another 2NE1 classic “I Am the Best” from the group’s self-titled album. This made the fans jump from their seats and dance with her.

Minzy performed and sang the song live and on her own. The song made one nostalgic of the time when she and the rest of the 2NE1 namely CL, Park Bom and Dara performed it with her. But Minzy’s presence was so big that she managed to fill a huge basketball court with it. She ran from one end of the court to another, threw her head in the air, and left the spectators breathless.

It’s a huge reminder that even though they’ve disbanded, 2NE1 became famous because they had the skills and the talent. Minzy the Superwoman reminded everyone who watched the UAAP opening live and on television of that.