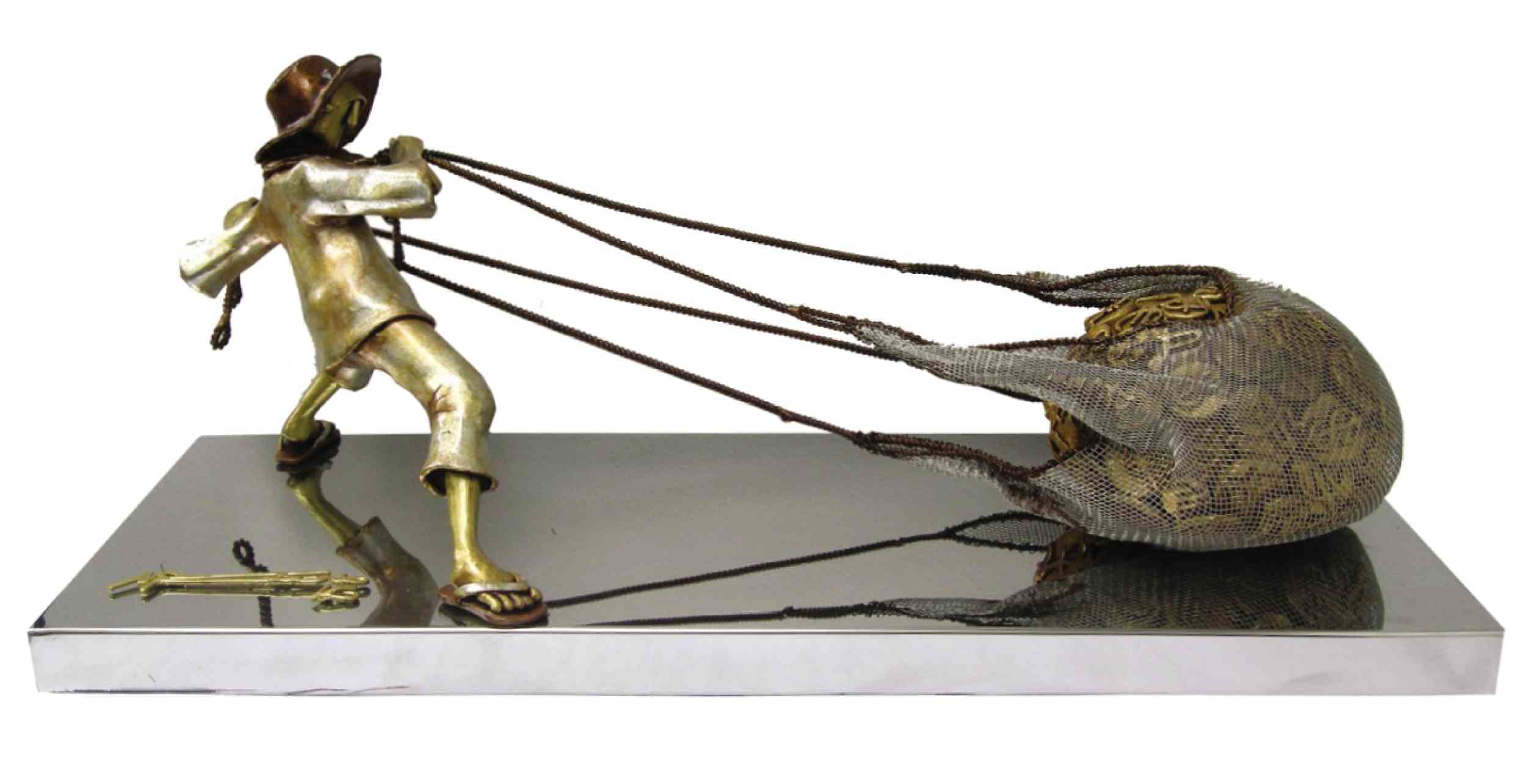 “Abundant I”Amid the gloom due to inflation and other economic woes, artist Michael Cacnio has chosen to go the way of optimism in his collection of new sculptural works, “Abundance,” on view at The Gallery of Solaire Resort until Sept. 30.

In the series, the best-selling sculptor conjures a fantasyland where money grows on trees, svelte figures are garbed in the strongest of global currencies, and everyone is comfortable and happy.

To dismiss Cacnio’s thematic exploration into wealth and good fortune as a mere exercise in privileged fantasy, however, is to miss his point altogether. “For this show, my simple wish is for us to be abundant as a nation together,” he explains.

Over the past 30 years, Cacnio has earned the reputation as the country’s leading brass artist ,sculpting scenes from everyday Filipino life, focusing on family, traditions and children at play.

As with many of his previous exhibits, this latest collection is a tribute of sorts to his father, acclaimed painter Angel Cacnio.

In the 1980s it was the older Cacnio’s designs that were used by the Central Bank for the Philippines’ P20 and P100 peso bills, compositions which now form our cultural vocabulary.

These illustrations from a bygone era before digital image-making were instrumental in forging notions of nationhood and Filipino identity.

These compositions are replicated throughout the exhibit as artworks within sculptures.

This celebratory tenor is characteristic of Cacnio’s work. Ever the optimist, he chooses to highlight what he considers are the best virtues of the Filipino, rendering them in idyllic, jovial terms.

He’s tackled “serious” themes before, but this latest exhibit may be seen as counter-discursive to the rhetoric of division and gloom, an act of creative visualization.

Some of the more arresting pieces in the exhibit include: “Gripo,” a faucet overflowing with a steady gush of multiple currencies to the delight of a boy and girl; “Abundant I,” where a fisherman casts his net upon a bounty of cash; “Harvest,” showcasing a man struggling with the weight of his riches; “Hair of fortune,” portraying a diwata whose locks are adorned with the symbols of international currencies; “Tapwe,” a clown selling colorful balloons dressed in a P50 bill; and “Piso power” which revives the antiquated peso coin, gigantic and defiant.   –CONTRIBUTED