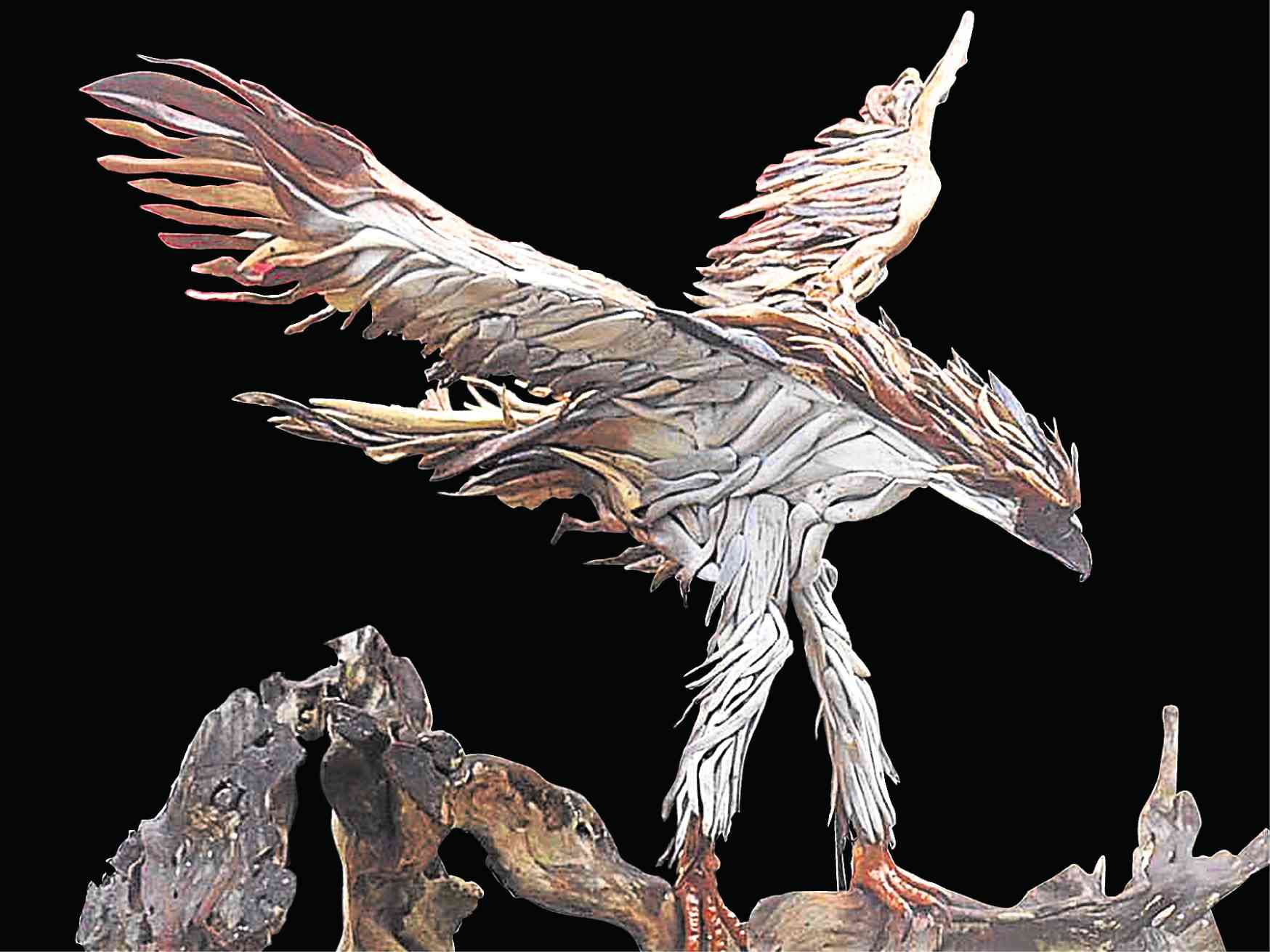 Zachary Alcoseba gives new life to the lowly driftwood in “Stories From the River,” a one-man exhibition now running at the National Commission for Culture and the Arts (NCCA) Gallery in Intramuros, Manila.

Transforming wooden debris into functional forms and works of art, Alcoseba pays homage to the Subanon or Subanen, the riverine people of Mindanao, particularly of Usugan in the town of Bonifacio, Misamis Occidental.

Alcoseba hails from Northern Mindanao of the Subanon indigenous community. The exhibit then is a fitting way for NCCA to drum up interest in the National Indigenous People’s Month this October.

Highly prized for its durability and rot-resisting characteristic, it is has been assessed as vulnerable by the International Union for Conservation of Nature (and Natural Resources) under its Red List of Threatened Species.

The Asean Regional Centre for Biodiversity Conservation has also declared the magkono as rare and endangered because of extensive loss of its habitat.

However, according to Alcoseba, a retired agricultural engineer, magkono can also be found in Mt. Malindang along the Usugan and Lantawan rivers.

When rains bring floods, with them come the Magkono driftwood for which Alcoseba and his family search.

The artist-engineer said he also harvests pine driftwood, but his favorite is magkono since the wood provides a variety of colors and amazingly, can be identified through its distinct smell.

Magkono wood is heavy and one of the densest in the world. Alcoseba refers to it is as a “sinker” so it is usually submerged in water, buried under sand or rocks, and sometimes found in between boulders.

When floodwaters carry it along the river, weathering brought about by abrasion results in unique textures and colors such as black, brown, and shades of gray.

The search for the precious driftwood eventually turned into some sort of a treasure hunt and now includes the Subanon, and rightly so because Subanon literally means “people of the river.”

The “treasure hunt” has since been a source of livelihood for the Subanon as Alcoseba rewards them for their finds.

But what is more precious for Alcoseba are the priceless stories the Subanon bring to him along with the driftwood—the long walks, the strange encounters, and their communion with mother nature. The engineer-turned-artist now fondly refers to them as driftwood hunters and storytellers.

Never in his wildest dreams had Alcoseba thought he would be making these sculptures, let alone be called an artist or a sculptor.

At first, he said it was enjoyable, just like child’s play— putting pieces together like a jigsaw puzzle. He would even have Subanon children join him in his art-making. He would give them art workshops for free.

Then the challenge grew because he found out that the outcome of the life-size sculptures could not be predetermined. At any given time, it could be a horse, a hippo, or a buffalo, depending on the pieces of driftwood found and how they turned out after the finishing process.

“Today a particular wood may be good as a horse’s head but tomorrow it may look better as that of a water buffalo,” Alcoseba said. Form, he added, will follow after you have thrillingly and patiently searched for each piece of wood that would fit perfectly together—piece by piece and part by part.

Alcoseba’s animal creations are made of eighty percent (80 percent) magkono driftwood; all are hollow with no armature.

The structural support for each sculpture relies solely on the trusses as base and wooden nails or trunnels as fasteners made from the same driftwood. Each large work, depending on the size and availability of materials and time, may be completed in eight months.

Some of the pieces presented in the collection are part of his horse series including “The Raging Horse,” “A Horse with No Name,” “Tikbalang,” and “The Daredevil.” Also featured in this exhibition are the “Tamaraw,” “Philippine Eagle,” “Philippine Eagle Owl,” and “Bertha,” his homage to Manila Zoo’s oldest inhabitant, Bertha the Hippo. Bertha died last year at the age of 65. His latest obra is the “Storytelling Chair” in honor of the Subanon.

Through this exhibit, the artist hopes to increase public awareness of environmental concerns such as deforestation and endangered species; promote environmental sustainability through recycling; and encourage local income-generating activities through artistic training and capacity-building. –CONTRIBUTED