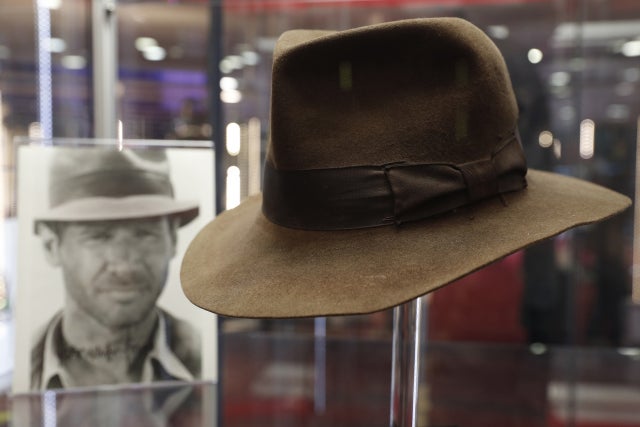 Indiana Jones’s signature fedora fetched more than half a million dollars at a blockbuster London auction of rare memorabilia from some of the most iconic movies of the past 40 years.

Organizers said they had “a number of post-auction inquiries” about the space-traveling jacket and were hoping to strike a deal in the coming days.

More than 600 costumes and props from much-adored films and television series went under the hammer on the banks of the River Thames.

The memorabilia seller Prop Store has held the annual event since 2014 and expected to collect a record £3.5 million.

That figure might not be initially met with the jacket setback.

Organizers were hoping it would get up to a £1 million. The auction was halted with bids at £450,000 — just short of the minimum price set by the undisclosed seller.

The jacket oozes cool and appeared in the scene in which Solo dodged asteroids and shot at Darth Vader in “Star Wars Episode V: The Empire Strikes Back”.

“There’s some very cool stylized elements, like this triple-stitch banding on the sleeves.”

The price includes a buyer’s premium paid to the auctioneer. The hat cost £320,000 when the winning bid was placed and the hammer struck.

One of the most recognizable hats in film since Charlie Chaplin’s black bowler is signed on the inner sweatband by Ford himself.

The fedora was “sat upon, wrung repeatedly and treated with bleach and dust” ahead of filming to achieve a worn look, according to the auction catalog.

Another hot item is the neon pink and green hoverboard ridden by actor Michael J. Fox’s character Marty McFly in the “Back to the Future” trilogy.

Other classic movie items sold include the robe worn by Brad Pitt’s Tyler Durden character in “Fight Club”, a Wonka bar from “Willy Wonka and the Chocolate Factory” and Johnny Depp’s unique costume in “Edward Scissorhands”.

Prop Store acquires its wares from movie studios, crew members and other collectors around the world.

It is due to announce the amount it raised from the auction on Friday. CC

‘Indiana Jones’ could be returning to theaters in 2020, minus Shia LaBeouf