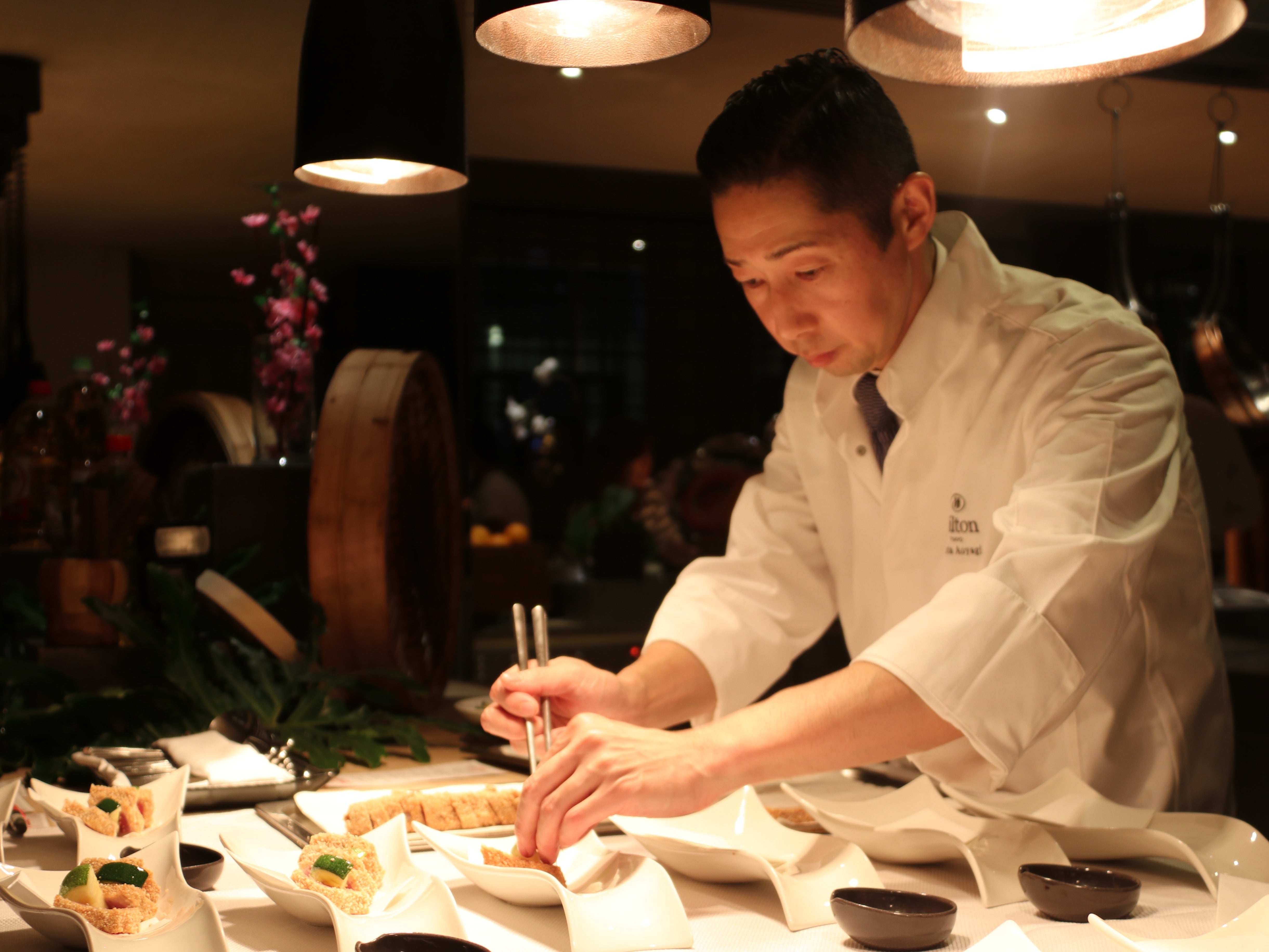 Brasserie on 3, the all-day dining F&B outlet at Conrad Manila, is hosting a guest chef from the Hilton Tokyo this week. For five days only, chef Genta Aoyagi will prepare a number of dishes that will be incorporated into Brasserie on 3’s daily lunch and dinner buffets.

On the first day of the promotion last Wednesday, the chef prepared a kaiseki (multicourse) dinner that opened with Torched Squid, local squid with grilled eggplant and seaweed jelly; and Sashimi Rainbow, three kinds of fish (salmon, tuna and amberjack).

Michihiro Mishima, Aoyagi’s interpreter and the assistant director of F&B at Hilton Tokyo, said that all the seafood used was locally sourced and sustainable.

“The fish used for the sashimi is local but was sliced the Japanese way,” Mishima said, meaning thickly and evenly. Crusted Tuna, the third course, made use of the same tuna as the sashimi but was given a crunchy fried exterior with crushed rice crackers made by the chef.

To tide us over before the beef course, grilled Wagyu with miso and mixed vegetables, the chef sent out savory, custard-like Chawanmushi. The beef was good if a bit well-done, and topped with a shiso leaf fried crisp. The leaf is traditionally served fresh with sashimi, its astringency cutting through the often fatty fish.

Aoyagi started his culinary career in 1997, before joining the Hilton Tokyo in 2003 as a chef at Musashino. After the grand opening of the Japanese restaurant Junisoh, he was chosen Tokyo Governor winner of the 2015 National Japanese Cuisine Competition. In 2016 and 2017, he took the top titles at the National Japanese Culinary Arts Championship.

Aoyagi was named head chef of Junisoh in April 2017. The boyish-looking chef (he’s 40) enjoys experimenting with textures and flavors. Aside from the smoked eggplant in the first course, he also served smoked edamame, which is usually boiled. The addition of rice crackers to the Crusted Tuna was a nice touch, as was the nontraditional use of shiso leaf. I had never eaten it fried.

“We are delighted to host Hilton Tokyo’s chef Aoyagi who is joined by Michihiro Mishima,” said Conrad Manila general manager Laurent Boisdron. “As a popular and well-respected chef in Tokyo, he will take Manila’s Japanese dining connoisseurs on an outstanding gastronomic experience.”