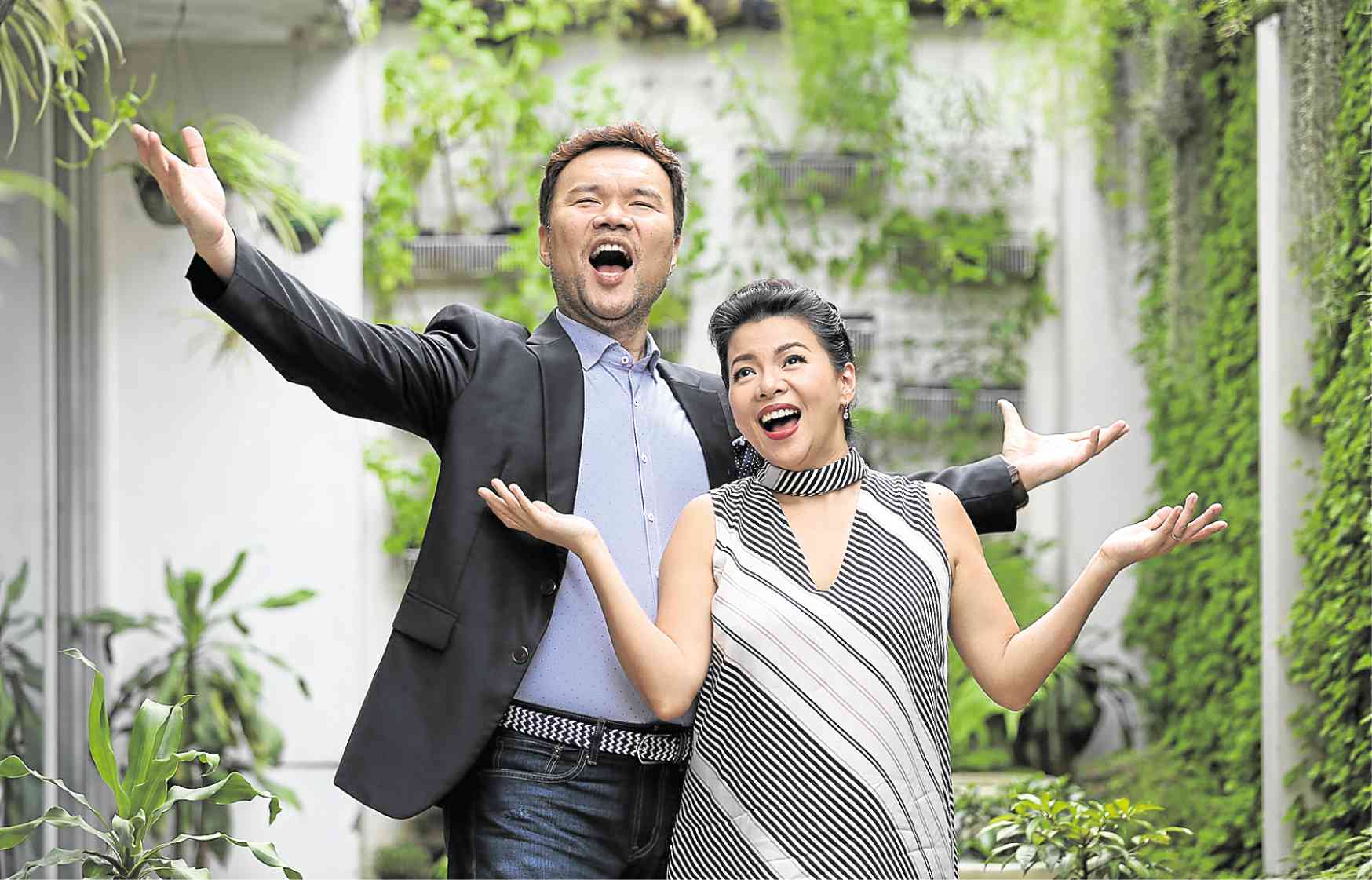 Rachelle Gerodias and Byeong In Park: A beautiful love story–with a reality check

He is telling the story of how he met his wife, Filipino soprano Rachelle Gerodias, in a Singapore Lyric Opera production of Mozart’s “Cosi fan tutte” four years ago.

Despite the narrow bench of world-class Asian opera singers, the two had never met until then. Somehow they landed the roles of the lovers Guglielmo and Fiordiligi, and life soon began to imitate art.

“’Cosi fan tutte’ is a love story,” he recalls. “We were together for almost a month of rehearsals and one week of performances. And then it was finished.”

Park went back to Germany where he was based, but he kept in touch with Gerodias through an internet chatline. After two months of online courtship, he needed to see her again in real life. He booked a flight to the Philippines.

Five months later, they were man and wife.

“For me, it was a matter of waiting for the right person to come into my life,” says Gerodias who, at 47, is four years older than her husband.

“I’ve always wanted to have a family, but at the time I met him I thought I wasn’t going to get married anymore.”

The life of an opera singer, with its hectic schedules and constant traveling, was hardly conducive to long-term relationships.

“I’ve tried it and it never worked,” she says.

“But I guess it was meant to be. I thought that when I got married I would give up singing and just focus on my family and my children. But because of him I’m still singing, because he’s very encouraging and is always pushing me not to stop. He’s my voice teacher now.”

The couple now have two sons, José Victorino, 3, and Theodore Franco, one and a half.

Apart from performing, they also run the Gerodias-Park School of Music for private voice students.

“It’s not the normal household where the man works for eight hours a day and comes home and the wife has dinner ready for him,” says Gerodias. “We’re both artists so we’re always helping each other. We also work at home because our music studio is there. We set it up like that so we don’t have to be away from our children. Me, I’m happy where I am. I just want to focus on our two boys.”

In the popular imagination, the image of the operatic soprano is that of the diva: flamboyant, temperamental, hooked on public adulation.

Gerodias is something of an anti-diva: offstage she’s low-key, soft-spoken, shy even.

Much of this demeanor comes from her Christian roots. Both her parents were active members of the Unida evangelical church in Novaliches, where she grew up, and her first awareness of music came from hearing the church choir sing.

“My idols were American gospel singers like Sandi Patty who were classically-trained,” she recalls. “Their songs were hard to sing—I could sing them but I couldn’t hit the high notes.”

It was after she won a gospel singing contest in high school that she first thought that singing might be her calling.

“At that young age I already had that spiritual outlook,” she recalls. “I was praying about it. Is this for me? I decided that I wanted to study music. I didn’t know about opera. I didn’t even want to perform professionally. I just wanted to be a better singer. I wanted to develop this talent that I thought was special.”

Eventually, she persuaded her parents to enroll her at the University of Santo Tomas (UST) Conservatory of Music, where she came under the tutelage of coloratura soprano Gloria Coronel.

“She was a very good teacher,” recalls Gerodias. “I learned all my techniques from her.”

“I was very shy,” she says. “Just the thought of performing in front of an audience horrified me. But in college, I had to. We were required to perform in recitals, small concerts and competitions.”

Gerodias started winning competitions. She performed at Concert in the Park. Then in 1991, her friends pushed her to audition for Rolando Tinio’s Filipino adaptation of “La Boheme.” Much to her surprise, she was cast as Musetta, one of the leads.

“That was the turning point,” she says. “From nothing I was suddenly performing at the CCP (Cultural Center of the Philippines) Main Theater with the Philippine Philharmonic Orchestra. And I liked it. Everybody was saying ‘You’re a natural.’ I thought ‘OK, I can do this.’ I was 19 years old.”

This stint was followed by a scholarship to study opera at Hong Kong Academy for Performing Arts. Her perch in Hong Kong put Gerodias on the radar of the global opera network. Within a relatively short period she was singing in international productions in Vienna, Sarajevo, Japan, China and Singapore, and singing in a master class with one of her idols, legendary Italian diva Mirella Freni.

She also auditioned on the main stage of Vienna State Opera for one of its directors. The gates of the exalted opera world were seemingly open to receive her.

It was at this point, in 1997 when she was 25, that Gerodias experienced a sobering reality check.

After performing a full concert at CCP despite being under the weather, Gerodias woke up the following day, opened her mouth, and was horrified when no sound came out of it. She had completely lost her voice.

When she hadn’t recovered after several days’ rest, she knew something was seriously wrong. A visit to a medical specialist confirmed her worst fears: a potentially career-ending polyp on her vocal chords.

A course of treatment followed, including six weeks of complete rest, meaning no speaking, much less singing.

“It was the darkest period of my singing career,” says Gerodias.

The worst part was not knowing if she would ever sing again.

Recovery was slow and painful. Gerodias went back to her old teacher at UST, Coronel, for vocal practice sessions. Within two or three months, much to her relief, she was singing again.

The scare was instructive.

“I’ve always prayed about the decisions I make in my life, and that includes music,” she says. “I realized that this is really God’s calling for me—

Coming home also made her realize that she could be based here and still have an international career. Most Filipino classical singers at her level—Andion Fernandez, Arthur Espiritu—have chosen to base themselves in Europe or the United States where opportunities are.

Gerodias is something of an anomaly: she’s an opera singer in a country without opera.

Only the lucky few who have seen her in full-scale productions in Europe, the United States, Singapore and Hong Kong have heard her voice at its best. The rest of us will have to make do with smaller-scale musicals, concerts and recitals which, any opera buff will tell you, is not the same thing.

For a singer of her caliber, Gerodias is also criminally under-recorded. Always an entertainment for the elite few, opera was able to reach a mass audience only with the advent of the phonograph record.

Apart from her own self-produced CD with Raul Sunico titled “Philippine Art Songs” (available online on CD Baby), however, Gerodias is most easily heard on YouTube clips, most of which are not exactly high fidelity.

Luckily, there’s the kundiman, the traditional Tagalog art song of which Gerodias has emerged as a leading contemporary interpreter.

“I’m an opera singer but my first love was really the kundiman,” she says. “I’ve always thought of the kundiman as an art form. The classical kundiman are not just love songs or serenades—they were composed by classical composers and were meant to be sung by classically-trained singers.

“It’s a language I can relate to,” she adds. “It’s about sentiments that Filipinos today can relate to: love, losing someone, hope. It can also be about love of country. I’ve always wanted to expose audiences to it and educate the public about it because I believe it’s one of the richest, most beautiful products we have. It’s part of our heritage and something we should be proud of.”

Gerodias will get her chance when she performs in “Madly Filipiniana” on Oct. 13 at Globe Auditorium of Maybank Theater in Bonifacio Global City, Taguig.

Written and directed by Floy Quintos, it’s an all-Filipino concert in five acts.