Being LGBT in Kosovo: A battle to come out from the shadows | Inquirer Lifestyle ❮ ❯ 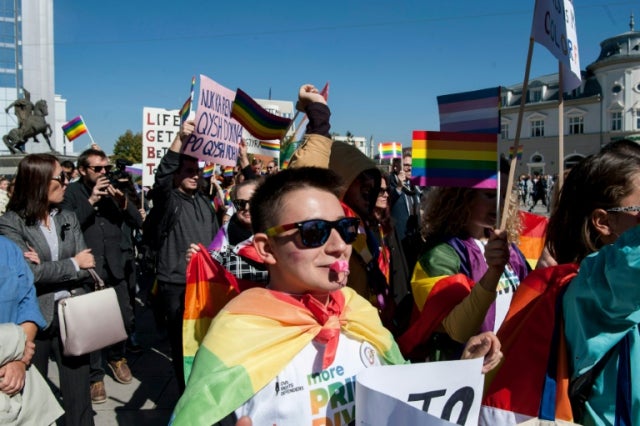 Lend Mustafa, a transgender man says that after marching in a pride parade he received "hundreds of threats from religious extremists, including life threatening ones." Image: AFP/Armend Nimani

Being LGBT in Kosovo: A battle to come out from the shadows

On paper, the legal request was small: changing his name from Blerta to Blert.

But it was a big — and risky — move by Blert Morina, a transgender man trying to bring Kosovo’s marginalised LGBT community out of the shadows.

The request to change his name to the more masculine version, and his gender to male, was rejected by authorities in the tiny Balkan democracy, where a gay and trans community is forced underground despite progressive laws in its 10-year-old constitution.

There are no gay clubs or bars in the capital Pristina, and only two coffee shops are considered safe in the city of half a million. There have been reports of owners of other cafes kicking gay customers out on the street.

Determined to change this way of life, Morina has filed a case with the Constitutional Court, despite the dangers that come with going public.

The 28-year-old only knows a few openly gay people in Kosovo, where the majority of the population are Muslim ethnic Albanians.

“For me it is very important to continue this route, because it is the first case (of its kind), we need to prove that you can push this till the end,” he told AFP, speaking inside a secret “safe house” in the capital.

It is the headquarters of his NGO, Center for Equality and Liberty (CEL), which purposefully does not list the address on its website.

The details are shared by word of mouth among members, a network estimated to be around 1,800, according to the NGO.

“I am out therefore I am,” reads a banner above the entrance to the living room.

“We will burn you”

A 2015 study of the US-based National Democratic Institute (NDI) found that Kosovo is the most homophobic country in the Balkans, a region that is not known for tolerant views on sexuality.

More than 80 percent of LGBT Kosovars interviewed said they had been subjected to psychological abuse because of their sexual orientation, while 29 percent reported being victims of physical violence.

Lend Mustafa, another transgender man who works with Morina, rattles off the threats he has received for his own transition and broader LGBT rights campaigning.

“After being the main speaker at last year’s pride parade I personally received hundreds of threats from religious extremists, including life-threatening ones,” he told AFP.

“Most of them are: we will eradicate you, we will burn you, you are ruining our society, what is this perversity that you are advertising in the media, etc.”

Despite a high number of threats and even physical attacks in recent years, only around 20 cases have been reported to the police since 2012, according to the Center for Social Group Development, an LGBT advocacy group in Kosovo.

“This happens either as a result of fear of retaliation, fear of exposure, or fear of no proper investigation and treatment of the case by law enforcement authorities,” the group said in a 2016 report.

Discrimination on the grounds of sexual orientation is outlawed by Kosovo’s 2008 constitution, which was written after the former province split from Serbia in a bloody separatist war.

It is “one of the most advanced constitutions in the region in terms of human rights and in particular LGBT rights,” said Habit Hajredini, who leads a government office in charge of minority rights.

But the letter of the law has little bearing on reality.

“We need to work hard in raising awareness to understand the importance and rights of this community,” Hajredini said.

There are also public figures who espouse openly homophobic views.

Fuad Ramiqi, a leader of the Islamic Movement to Unite political party, has said that LGBT people should seek medical care because “they have deviated from their reality.”

“If (accepting them) is a condition (for European integration) it is better for Kosovo not to enter Europe than to fulfill it,” he told AFP.

President Hashim Thaci attended the first two pride marches in Kosovo in 2016 and 2017, saying last year that “all citizens have the same rights, regardless of ethnicity or gender.”

However, Mustafa says most politicians do not forge meaningful links with the community but only attend events like pride parades to “please foreign ambassadors.”

“Almost none of the officials genuinely identify with us, but they feel it is a forced imposition from abroad and a condition for integration in Europe.”

For now, most gay Kosovars are relegated to “the shadows,” said Mustafa.

“Shadow life is not life, it is just survival.” CC