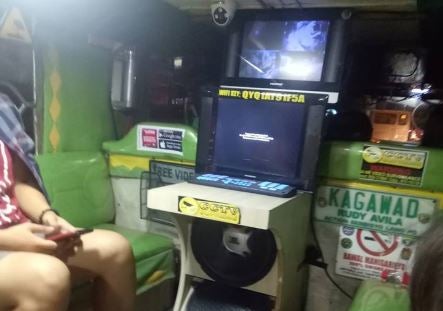 Commuting in Metro Manila may be a pain in the neck for the riding public, but it doesn’t mean it can’t be fun. Traffic light-beaters, overtakers, congested LRT and MRT trains and road ragers aside, one jeepney has taken public transportation to a whole different level with a novel twist.

Ronna Olosaba took to social media last Sept. 24 to share about the jeepney she was riding in, one that had a videoke, Wi-Fi and surveillance cameras inside. In her Facebook post, Olosaba shared pictures of the jeepney, showing a videoke machine set up behind the driver, from which passengers can choose songs.

The jeepney first became the talk of the town around September last year, but has continued giving joy to commuters, who to this day speak about their experiences riding it, as in the case of Olosaba.

As per Olosaba, the jeepney followed the route LRT Baclaran to Sucat. She also spoke about the mechanics of riding the jeepney: whoever sings five songs gets a free ride.

“Every time someone rides the jeepney, the driver announces that if someone will sing five songs, the fare is free,” she told INQUIRER.net last Friday, Sept. 28. “And if someone’s score reaches 100, she will be given a P5 coin.”

The jeepney is the initiative of barangay kagawad Rudy Avila and, apart from your average commuter, has seen notable figures hop in for the experience. Former Department of Environmental and Natural Resources (DENR) secretary Gina Lopez has been spotted in the jeepney last September 2017, where she belted out R. Kelly’s “I Believe I Can Fly”.

Olosabo further said that there were students riding with her at that time, but they weren’t able to get a free ride since they didn’t get to sing five songs. She recalled, “There was a group of students who sang, but only two songs were sung because they already [reached] their destination.”

The jeepney, too, didn’t fail in brightening the commuters’ mood.

“We [were] all laughing and I can see that all of the passengers [were] having fun, especially when the driver turned the lights off. It felt like we were inside a KTV [bar],” she said. “It was a memorable experience. The fun we had that night was priceless.” JB

Jabbawockeez dances in Makati, on top of jeepney to thank 2M subscribers