Life’s no drag for the Queens of Hanoi | Inquirer Lifestyle ❮ ❯ 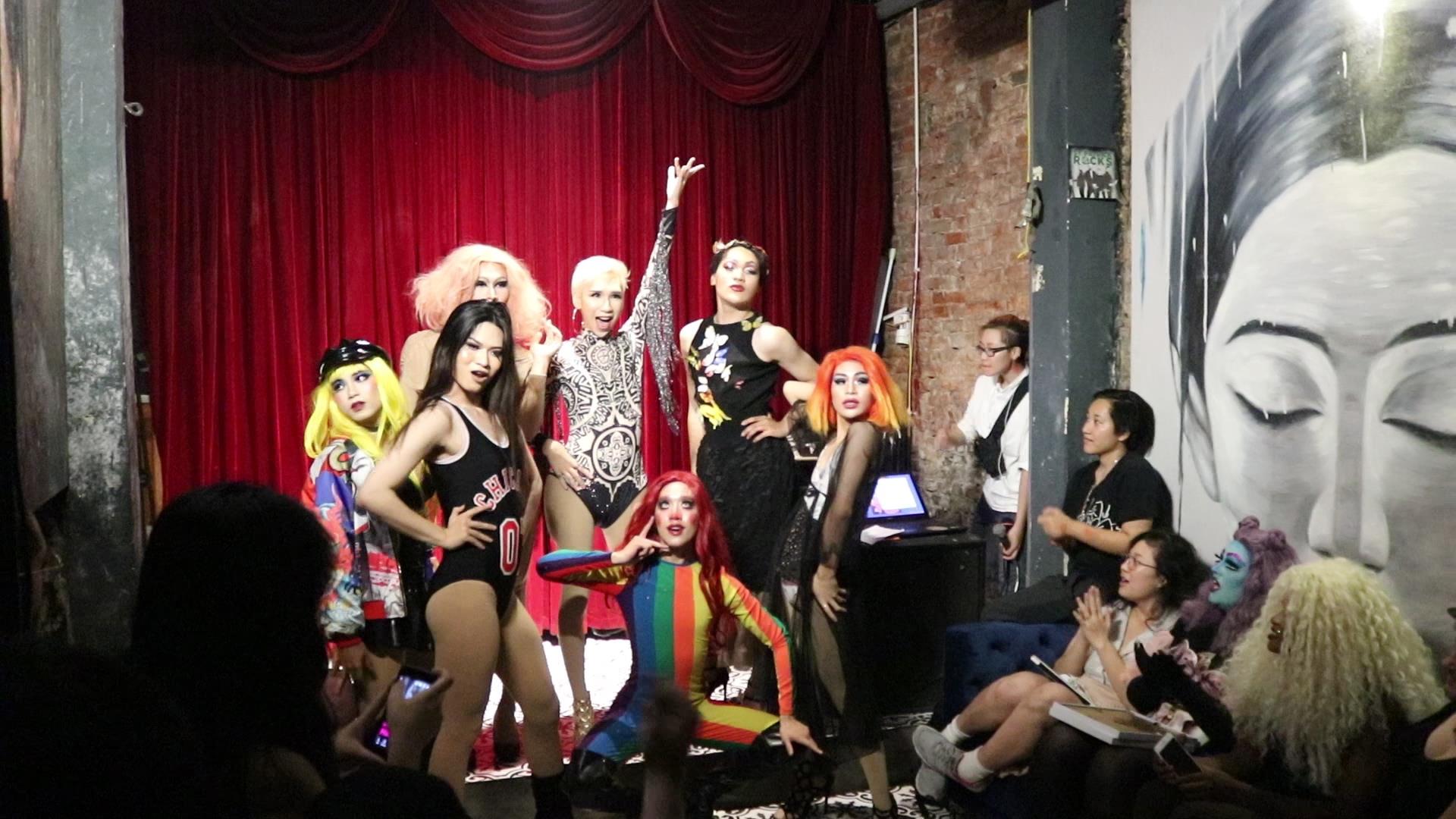 Life’s no drag for the Queens of Hanoi

HANOI – Mirror space is at a premium at a bar on the edge of the Old Quarter. But only on one particular night.

There’s a single bathroom on the ground floor of the Mojito Bar where a pretty large queue formed outside last Friday night.

Ten minutes into the wait and the person at the head of the line became concerned. He need not have worried.

After a few polite knocks, the door finally opened and out stepped a six foot plus tall (aided by heels) ‘lady’ into the bar.

An elaborate wig adorned the top of her head and she was dressed in a tight fitting silver number.

Her make-up had been applied to perfection and she strutted confidently past those waiting in line without a care in the world.

“Perfection takes time darling,” she told the man at the front without actually looking him in the eye.

This is downtown Hanoi. And this is a Drag night.

The crowd packed into the narrow venue was urged repeatedly to sit on the floor to allow those at the back a chance to see the show.

“It took me five hours to put my make-up on this evening,” quipped the evening’s host Winnie after arriving at the venue later than planned. She wasn’t joking.

“When I transform into a drag queen, when I put my make-up on, when I perform, or I just do anything related to drag, I feel confident,” Betty said.

“Confident, because drag culture is a fitting form of self-expression that showcases my personality and my style to everyone.”

Despite becoming more and more prevalent in the north of the country, Betty believes it is still far more acceptable in the south.

“People say the drag culture has started to be received well by the general population, but I think it’s only true in the south of Vietnam,” Betty said.

“Up until now, my drag group is the only one in the northern region.

“In the past, it was not easy, nearly impossible even, to come by drag queens who could openly display themselves like this. But in recent years, especially for the last two, the number of drag queens has gone up considerably and the trend would surely advance further as an art.

“The introduction of drag queen culture into Vietnam seemed to be more on the subdued side, not anything too bizarre. It’s just that the image drag queens choose to go with in a night performance might not be what people are used to, but once people get used to this, they would find drag culture liberating, a lot of fun and interesting.”

Betty said drag culture is often associated with LGBT as it is used as a form of showing “pride, fearless self-expression, or a way of coming out”.

“In the future, I think drag culture would grow strongly and could be representative of the LGBT community.”

Sen Riot, 26, does not see himself as transgender, but instead a performer.

“Drag as an art form does not have anything to do with the performers’ sexuality, it could just be understood simply as a male wearing female attire to perform on stage,” Sen said.

“Drag is not a new phenomenon in the world, but in Vietnam, I think the culture only emerged 3-4 years ago. As demands for entertainment go up, there will be shows for us drag queens to perform in.

“Performing as a drag queen, I am still the person that I am, I am not a different person, but the drag clothes seem like a suit of armor that lends me great confidence, bravery, and freedom.”

It wasn’t just Queens on show. There was also a Drag King. This was only Claire Allured’s second time dressing up as a man.

“I’ve always enjoyed dressing in male clothes,” said artist Claire, from London. “But I guess I’ve always been told to be more girly which is not really my style.

“A couple of years ago I got really inspired by a drag show in Indonesia and since then I’ve always wanted to try drag.”

“For Vietnamese people this is a good opportunity to get to know a different type of culture and for me it is also a way to break stereotypes about gender expression.”

Despite the shows being a relatively new phenomenon in Ha Noi, men dressing as women is nothing new and dates back many centuries.

Con di danh bong is an ancient folk dance which has men disguised as women performed at the festival of Trieu Khuc Village in Ha Noi’s Thanh Tri District.

Similar routines were also held to mark the anniversary of the capital city.

Today’s modern take on the old traditions may not be in the same vein but produce entertainment nonetheless.

These days stereotypes are certainly being broken in Ha Noi, albeit one sequin at a time.

In the late 1800s to the mid-1900s, pantomime dames became a popular form of female impersonation in Europe.

The first recorded use of drag in reference to actors dressed in women’s clothing is from 1870.

In the early to mid-1900s, female impersonation had become tied to the LGBT community.

American actors Tony Curtis and Jack Lemon dressed as woman in the 1959 movie Some Like It Hot, also starring Marilyn Monroe.

A drag queen may either pick or be given a drag name by a friend, sometimes called a “drag mother,” the so named thus becoming known as a “drag daughter.”