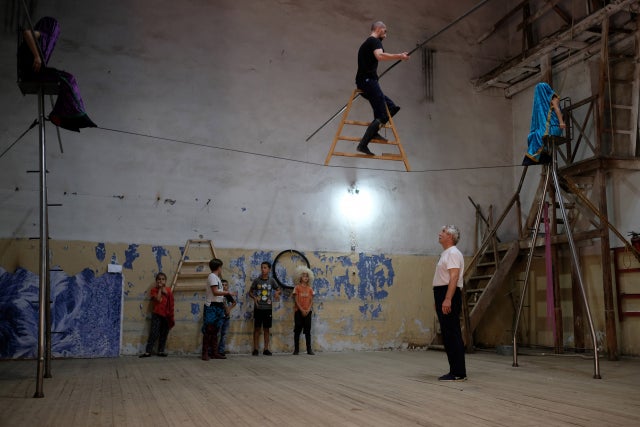 Dressed in a red and silver sequined jacket and trousers, 13-year-old Muhamed Balikhanov holds a long pole as he slowly rides an old red bicycle along a tightrope suspended several meters off the ground.

In his remote village of Chakhchakh in the southern Russian region of Dagestan, Balikhanov is one of the few to continue a tradition of tightrope walking that dates back hundreds of years.

For locals in the mountainous North Caucasus region, tightrope walking began centuries ago as a way to take shortcuts between precipitously placed villages with no roads between them.

“In Dagestan, tightrope walking has always been the ‘road of the highlander’ because there were no roads. That’s how tightrope walking was invented,” said Askhabali Gasanov, who heads a circus studio in the regional capital of Makhachkala.

Dagestan’s tightrope walkers later gained fame by performing daring feats in circuses. During the Soviet era, a troupe of artistes from Dagestan performed in Moscow and abroad and its members were awarded the prestigious title of People’s Artists of the USSR.

One of Russia’s current top tightrope walkers, Rasul Abakarov, is of Dagestani origin though he grew up in Saint Petersburg. This month he walked along a wire at a height of 100 meters (330 feet) between skyscrapers in Grozny, Chechnya.

The skill could be long forgotten in the small settlement of Chakhchakh where cows and chickens wander freely, were it not for the efforts of Yamudin Ekhmetkhanov, a 68-year-old former acrobat, who is now passing on his knowledge to a group called Gunar that includes Balikhanov, his cousin’s son.

The teenager limbers up with gymnastics: grabbing the tightrope from a standing position and swinging himself up into the air.

In another stunt, he stands with his feet in a metal washtub and shuffles along the rope.

The boy has been practicing tightrope walking for two years and has managed to achieve incredible results, his teacher said.

“He has a great future and is not afraid of anything,” said Ekhmetkhanov, praising his “huge talent.”

The teacher said he believes the tradition is still valued in the region.

“Our people… very much respect tightrope walking tradition in Dagestan,” he said.

“I am happy about it because in this case it will never disappear.”

Balikhanov said he aspired to excel on the tightrope because in past years “my grandfathers and great-grandfathers did this.”

“When I’m grown up I want to revive this art so my children, my grandchildren also do it,” he said, adding that he dreams of opening a specialized school in his village.

In Makhachkala, children are learning the art at a circus studio called Pekhlevan — meaning hero or fighter. Its 64-year-old founder, Gasanov, has been tightrope walking himself since he was 18.

In a high-ceilinged room with peeling paint, a group of girls and boys in T-shirts, jeans or tracksuit bottoms take turns to perform on the tightrope to music.

One girl stands in an upright wheel that rolls along the wire.

At one point, two girls perform on the wire together with long, velvet veils covering their faces.

Gasanov manages a troupe of eight children, who perform tightrope stunts all across the region — one of Russia’s poorest — in an attempt to preserve this ancient tradition, which he admits risks becoming forgotten.

“It is a dying talent, a disappearing one, but we try,” says the wiry man with white hair and a moustache.

With dwindling state support it has become more difficult to sustain local performance schools and to get children involved in tightrope walking.

The authorities have expressed interest in building a circus in Makhachkala and supporting schools to teach the traditional skill.

But Dagestan, like neighboring Chechnya, is struggling economically and dependent on Moscow for funding to balance its budget.

Gasanov wants Makhachkala to have its own permanent circus building like in many other cities in Russia, to show off the regional art form.

“Since 1995, I’ve been knocking on all the doors of government institutions and the culture ministry, trying to explain to them that Dagestan is a circus republic and there should be a circus here,” says Gasanov.

He sees a risk to the tradition from young people moving away to find work due to high unemployment and poverty in the region.

“Now only enthusiasts who love tightrope walking work here. The values are different now, people go where you can earn more.”

Many also have ceased to value the skill behind tightrope walking, he said regretfully.

Vows in the air: German couple married in tightrope wedding