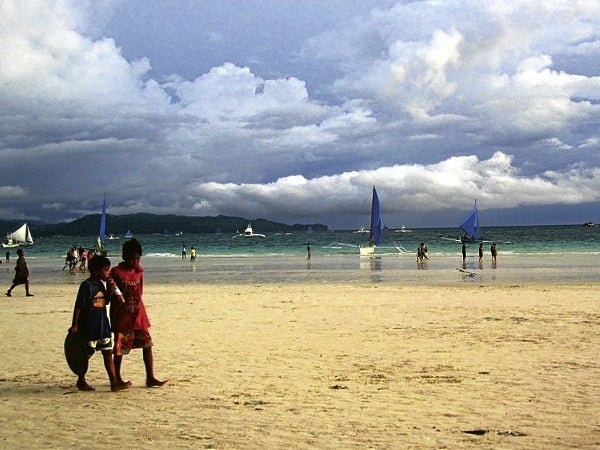 The first time I ever went to Boracay was just after my senior year in high school.  My twin sister, an older sister plus her friend, and I filled a giant duffel bag with canned goods and flew to the island, planning to bunk in with our aunt, who was staying at a little cottage called Gunding Torres for P300 a night. The year was 1999, and couples were still running around the beach naked.

Every night the four of us would head out to Cocomangas, sit by the backgammon table, and watch the activities unfurl without ever needing to drink alcohol. We got near tipsy only once, on a Saturday night, when a bunch of Korean kids invited us to play a drinking game involving a glass, some tissue paper, and a 25 centavo coin. Unfortunately, the game came to an abrupt halt after I accidentally swallowed the coin.

Each morning, we would run out into the polvoron white sand equipped with snorkels, paddles, kayaks, and anything else we could grab from our aunt, who was always prepared for these kinds of trips. At lunch we would troop back to our hut and dig into heaps of rice and tuna afritada or tuna kaldereta, whichever tin was available, hastily heated over our aunt’s mini-stove.

To this day we remember every single detail about that trip, including the setting, characters, and dialogue involved. We could also still warble out bits of the songs we made up, including one particularly tricky one sung to the tune of itsy-bitsy, teeny-weeny, yellow polka-dot bikini.  We remember each embarrassing, funny, sordid, and splendid detail as if it were yesterday, and Boracay was still what it was.

Margarita in a jar

My second trip to Boracay was with my two other sisters who weren’t with us on that first trip. I was in college then, and they, being older, were content to lounge about on the poolside and order boring food served on boring white plates. My eldest sister, Jen, and I ventured out into the nightlife only once, I think, to share one margarita in a jar, and to hurriedly scamper back to our hotel shuttle because it left promptly at midnight, every night.

Sadly, there were no bloopers, canned tuna, swallowed coins, or composed songs about it, but we had a gloriously beautiful patch of beach all to our smug, boring selves.

My third trip to Boracay happened only the summer of this year, as I had steadfastly refused to go back since that last trip in 2001, around the time people started calling the island “Bora,” and product banners and events had begun popping up in newspapers nearly every week, alongside guest DJs and glowing celebrities. I believed Boracay had nowhere to go but downhill from there, and when somebody mentioned that a mall had been built on the island, I decided to myself that it already had.

As it was, I was tasked to write about an event launch for summer, complete with banners and celebrity endorsers, and had it not been my friend Louie Cruz who asked me to go, or had I not been a teeny bit curious about how the island had transformed in the 10 years since I last saw it, I would have flatly refused.  But it was and I was, so I went.

I hated the concrete and the tricycles from the very first moment we rolled down the road toward Station 1. I detested the huge groups of tourists, the convenience stores and the billion and one plastic bags and bottles and useless produce. I thought the tourists looked artificial, and that tinges of desperation were evident in the eyes of vendors and locals, all trying to make money from the scraps left over from the big, overpriced businesses.

I thought the beach looked worn, and that the trampling feet of hundreds of thousands of drunken tourists did little to help. That first night I stayed in and watched TV alone in my huge hotel room, missing the simple, wooden walls of Gunding Torres, where every night, my sisters and I had sniggered madly over the roar of snores from our German neighbors.

Days before our departure, I already had everything planned out: I will turn in my assigned story, bang out an angry piece denouncing the ills and illusions of Boracay, post a sarcastic message on Facebook afterwards, and never ever again return.

But of course, in the confounding manner only this universe is capable of, that very same weekend I was picked for a job that required two months’ training on the island.  I was back in less than a week, and handed the keys to a tiny place at Barangay Bulabog, on the other side of the famous White Beach.

And wouldn’t you know it, somewhere between my exasperation at the relentless toogsh-toogsh of crappy dance singles at every bar, and revulsion at the weed-like vigilance of new construction sites at every turn, the island slowly began to grow on me.

I found a trail up Mt. Luho that looked right out into the sparkling blue sea; discovered a path down Bulabog Beach where the red, round sun rose magnificently each morning; walked and swam way beyond the borders of Stations 1 and 3; snuggled into the soft, fine sand at dusk, and realized, however begrudgingly, that Boracay is not all madness and money-milking mayhem.

I saw men tread up and down the shore with giant fish on their shoulders, bought little hand-carved items from stealthy young lads who hid from the beach police, called the women in stores “pangga,” went swimming and rolling on the sand with giggly Aklanon kids, bit into the juiciest, most scrumptious shrimp at D’ Talipapa, and each single day, was reminded again and again, why Boracay is still honored as one of the best and most beautiful beaches in the world.

At the end of my two months, I returned to Boracay a few more times. Our little office had expanded to include a bunch of American, British, Filipino, Russian, and South African interns, and for a little while, dancing pointlessly inside manic bars like Summer Place and Paraw, and nursing hangovers at Andok’s—some of the very things I had initially detested about Boracay—even became quite normal.

Strange, but it’s almost as if Boracay had become more enchanting, more endearing, after I’d come face to face with its grime: the receding beach front, the haphazard development, the lure of commerce.

Set against the hideous backdrop of what it could and would soon become, Boracay is now more lovely and more alive, simply because it still is what it is, despite what it’s turned into.  Or grimmer still, perhaps the reason why it’s so achingly beautiful now is because soon, it may just cease to be, or at the least, never again be how we remembered it.

And if there is really nothing else we can do, we can always just try and make more memories.