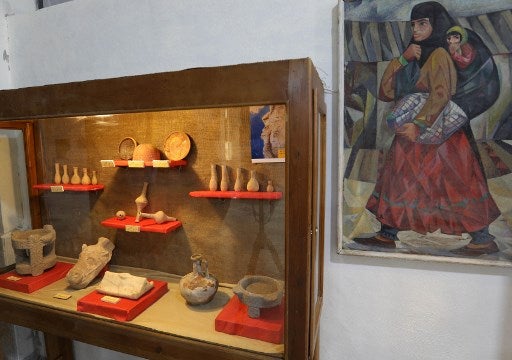 Syria's antiquities authority on Wednesday unveiled an exhibition in Damascus of hundreds of artefacts retrieved from around the war-torn country. Image: AFP/Omar Haj Kadour

Syria’s antiquities authority on Wednesday unveiled an exhibition in Damascus of hundreds of artifacts retrieved from around the war-torn country.

Dozens of Syria’s archaeological sites have been destroyed, damaged or looted since the start of the seven-year civil war, with all sides blamed for the plundering.

On Wednesday evening, golden coins, bronze statues and amphoras were among 500 artifacts on show at the Damascus opera house.

Visitors could admire two rare busts rescued from the ancient city of Palmyra and restored in Italy after being damaged by the Islamic State jihadist group.

The exhibits were “found by the Syrian army and its allies, and the different security forces,” after they retook cities and archaeological sites from rebels and jihadists, antiquities chief Mahmoud Hamoud said.

They “are from all historical eras — from the tenth century BC to the Islamic era”, Hamoud said.

In total, more than 9,000 pieces have been salvaged, he said.

“But tens of thousands of archaeological pieces that were smuggled out of the country have not returned,” Hamoud alleged.

Several artifacts were retrieved from neighboring Lebanon, he added, but were not part of the exhibition.

Thousands of Syrian archaeological treasures remain in neighboring Turkey and hundreds more across the border in Jordan, the antiquities chief said.

All warring sides have been accused of looting artifacts during the Syrian conflict, from both major archaeological sites and the country’s museums.

More than 360,000 people have been killed since the war started in 2011 with the brutal repression of anti-government protests, the Britain-based Syrian Observatory for Human Rights monitor says. CC