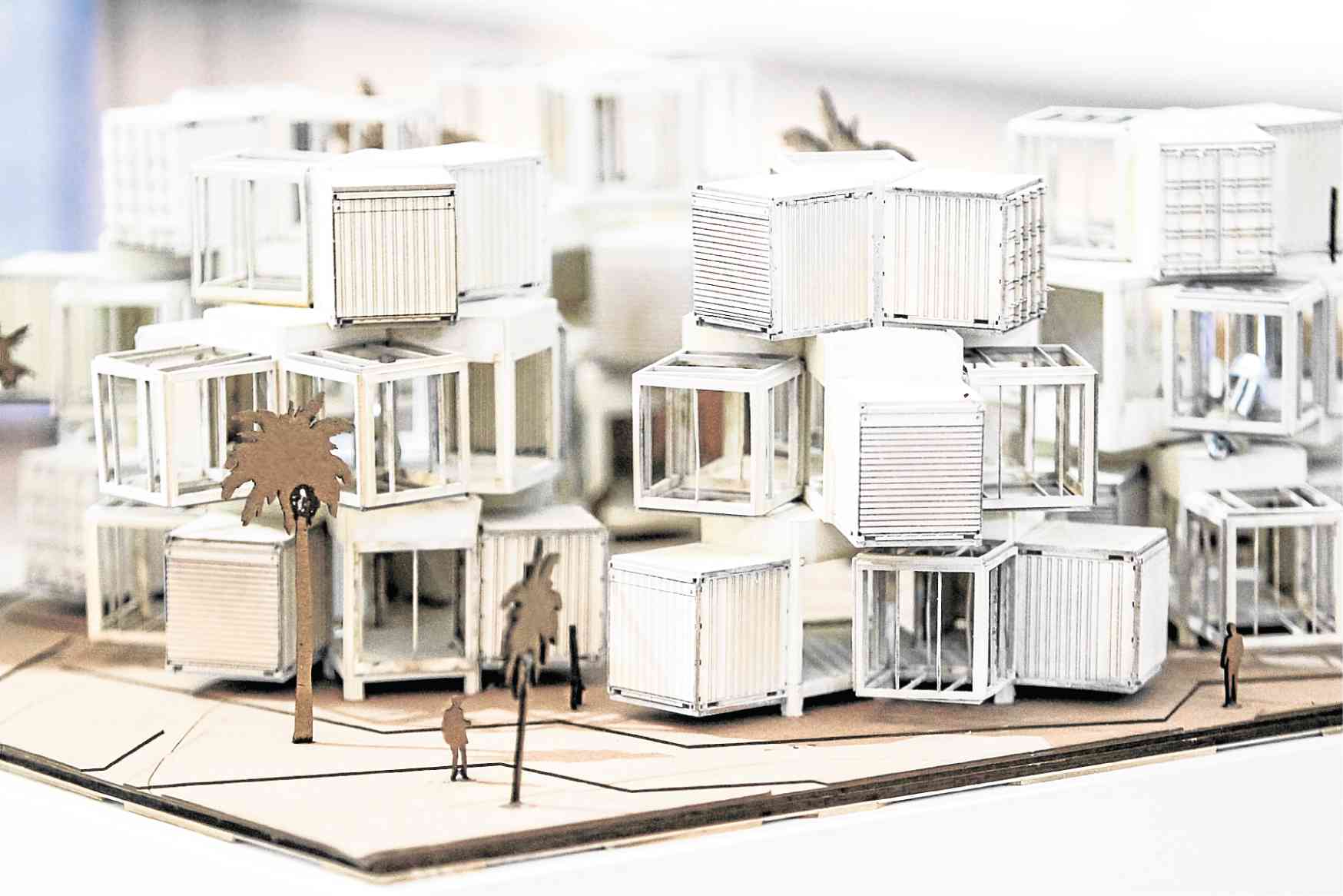 To those among us who live in the dystopian present, and have learned to embrace the chaos that is daily life in Metro Manila, the idea of achieving a liveable city through urban planning and design sounds like so much pie in the sky.

Manila is now the most densely-populated city in the world, with over 42,000 inhabitants per square kilometer. Metro Manila’s population is estimated at 21.3 million, according to the Philippine Statistical Authority.

To say the least, this poses a significant challenge to any city planner.

The dream of a liveable Manila refuses to die, however.

The latest out-of-the-box solutions to the city’s perennial human settlements problems come from the last place one might think to look: Cambridge, Massachusetts.

“Manila: Future Habitations” is part of a three-year collaboration between the global infrastructure and urban planning concern AECOM (best known to Filipinos for the Bonifacio Global City master plan), and the Harvard Graduate School of Design.

The Harvard design team focused its efforts on an area in the city’s northwest side encompassing Intramuros, the adjacent Port Area, the Pasig River waterfront and the Baseco informal settlement. For this study it partnered with the Intramuros Administration.

The idea, according to AECOM’s Asia-Pacific president Sean Chiao, was to come up with a plan where each area interlocked and connected with each other, like a jigsaw puzzle.

“Without looking at all four projects holistically and considering how they would connect together to reinforce each other as a larger strategy, the designs would become less powerful and less successful.

“The most significant problem Manila has as a city is that too many projects and developments are implemented in segregation,” he added.

The studio began last February with the Harvard design team, consisting of selected faculty members and students, immersing themselves in the communities they were planning for. They then went back to Harvard where they developed design solutions to the problems and issues they identified.

These were presented last Sept. 27 in a forum and exhibit at the San Ignacio Church and Mission House in Intramuros, which was attended by architects, planners, government officials and even a contingent from the Kabalikat sa Kaunlaran ng Baseco, a people’s organization consisting of Baseco residents.

The involvement in the project of leading edge thinkers in sustainable urbanism, such as Mohsen Mostafavi, Dean and Alexander and Victoria Wiley professor of design at Harvard GSD; design critic Spela Videcnik; and Pavlina Ilieva of Morgan State University added a much-needed socio-economic dimension that kept the designs grounded in the real-world issues confronting the inhabitants of today’s mega-cities, in particular the wide inequity between rich and poor, and the contrast in their living conditions, often within adjacent areas.

“Can we find deeper connections between social cohesion and built form, sustainability and density, public transit and social justice?” asks Ilieva in her paper on “Convergent Urbanity and the City as Place” that outlined the ideological underpinnings for the project.

The studio questions entrenched ideas about the use of environmental resources, urban transportation, public space, even heritage conservation, resulting in some genuinely fresh ideas that, if nothing else, should energize current discussions on the form and directions that Manila’s urban renewal should take.

“The power of hypothesizing future habitations today lies not in the validity of any one scenario or its ability to readily solve endemic problems, but rather in the capacity to unlock opportunities for convergence of purpose, form and political will for potential transformation,” adds Ilieva.

“This suggests promoting inclusive, sustainable and competitive cities delivered by researchers, policy makers, and practitioners that embrace a broader urban agenda beyond their immediate expertise.”

For Intramuros, for instance, the study offered an alternative to traditional ideas of restoring heritage sites.

Rather than undertake costly, period-correct restoration of the Walled City’s historic sites, many of which were all but obliterated in the final Battle of Manila at the end of World War II, the design creates a new network of public spaces designed to revitalize urban life for the students, tourists and even informal settlers that inhabit Intramuros.

In a move that is sure to ignite controversy among heritage conservation advocates, the Intramuros study also rethinks the idea of restoration. Rather than rebuild a ruined church in the image of its former glory, for example, the study proposes a “tactical restoration design method” which essentially reimagines the space with a bamboo pavilion.

“The goal is to restore the rich interior experience of these churches through an abstract and metaphorical design method appropriate to the needs and values of contemporary Manila,” according to the project team.

Sustainable urbanism likewise provided the framework for the redesign of Baseco, a “spontaneous community” (urban planner-speak for “squatter colony”) of 60,000 informal settlers.

Proceeding from the assumption that such a community would not receive sufficient government investments, the design team designed a plan that made use of already available resources, and introduced ecological interventions that converted human waste into energy, recycled solid waste, and utilized rainwater. The ultimate goal was to make Baseco a self-sufficient community and a template for transforming other urban slums.

The design team reimagined the gritty Port Area as a new urban district, with mixed-use developments and public spaces such as libraries, community gardens, playgrounds and exhibit areas in addition to the traditional industrial port area configuration.

The same approach was applied to the Pasig River plan, which focused on a one-hectare riverfront next to the Intramuros wall. The redesign included a pedestrian bridge connecting Intramuros to Binondo, a revitalized ferry hub, a number of public spaces and a series of floating platforms that could be adapted into community gardens, artificial reefs, basketball courts and boat docks.

The panel discussion that followed the presentation centered on how to translate these designs into reality. The consensus among the speakers was that a massive convergence of political will, private capital, government support and public acceptance would be needed.

Jeorgie Tenolete, speaking for the Baseco residents, provided a much-needed reality check when he informed the audience that none of the 60,000 members of his community held any title to the land they occupied.

Nobody said it would be easy. But at the very least, “Manila: Future Habitations” offers Manila’s city planners and ordinary dwellers a wealth of new ideas to ponder while they sit in traffic.