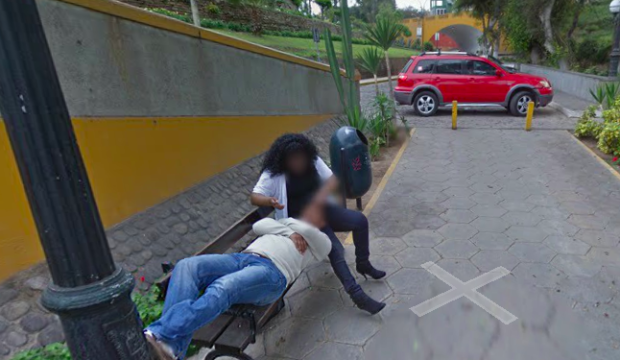 A man in Lima, Peru caught his wife cheating with another man, thanks to a photo of them together posted on Google Maps. Image: Screengrab from maps.google.com

A man in Lima, Peru, divorced his wife after he caught her cheating, thanks to a shot of her and the other man on Google Maps.

The unidentified man found about the affair on Facebook, Latin American local media La Cronica via Newshub reported on Wednesday.

The photo was taken in October 2013 at the Puente de los Suspiros, where a woman and a man are seen relaxing on a bench, with him resting his head on the woman’s lap.

According to the report, the husband was stunned upon finding his wife with another man. The man figured out that the clothes the woman was wearing was the same as his wife’s.

Upon his discovery, he then confronted his wife, who admitted to the affair. They later divorced due to her infidelity.

This is not the first time Google Maps gained attention for unexpected snaps. One kid in Buenos Aires made social media airwaves when we was captured tripping on a street, much to the amusement of netizens.  Katrina Hallare /ra

‘You pick,’ ‘no, you pick,’ – now Google can help pick with new Maps feature