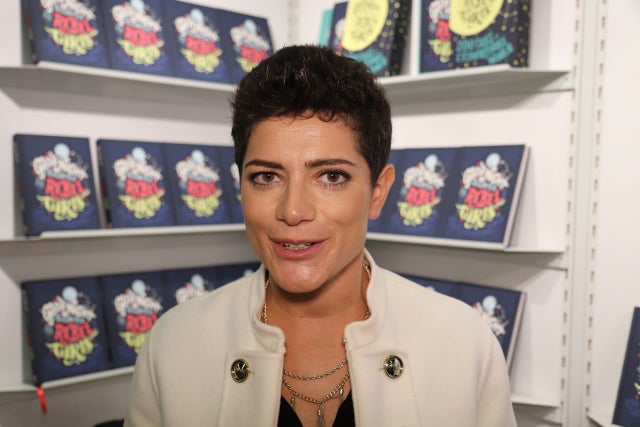 How 2 ‘rebel girls’ shook up publishing

Frustrated with children’s stories of passive princesses and damsels in distress, two Italian women crowdfunded their way into publishing history with a record-breaking book of inspirational tales for girls.

And their revolution has only just begun.

The first volume of “Good Night Stories for Rebel Girls” by Elena Favilli and Francesca Cavallo has become a global sensation, selling more than three million copies with translations in 46 languages.

“Most books don’t feature girls in roles where they take charge of their destiny. In most children’s books, when there are female characters, they don’t speak,” Cavallo told AFP at the Frankfurt book fair.

“We want girls to grow up with the certainty that they can choose the life they want. And never apologize for being too assertive, too ambitious or too brave.”

Co-authors Cavallo and Favilli, who live in the United States, were determined to change the gender imbalance on the bookshelf — despite having no publishing experience.

The duo had already founded a children’s media company in California called Timbuktu Labs, which created the first iPad magazine for children.

But to bring out a real-world book, they turned to crowdfunding, setting their goal at a modest $40,000 (almost P2.2 million)

They raised over $600,000 (around P32.5 million), making it the highest funded book ever on Kickstarter.

The huge appetite for the books blindsided the traditional publishing industry, spawning a raft of copycat versions as publishers scramble to catch up with demand for empowering stories about women.

At the opening of this week’s Frankfurt book fair, the world’s largest publishing event, director Juergen Boos cited the Rebel Girls chronicles as an example of how publishing was changing.

“We are seeing new ways that literature is being created, bought and received,” Boos said, pointing out that it took an online community “to reveal there weren’t nearly enough books with female heroines”.

The second Rebel Girls book, which has sold over 600,000 copies so far, again offers one-page bios of 100 strong women, written in a fairytale-style and paired with a colorful, illustrated portrait.

Beyonce and Oprah are among those featured.

Cavallo said it was “no coincidence” the books were so successful at a time when women’s voices are growing louder and the #MeToo movement has taken the world by storm, sparking a global debate about sexual harassment.

“We are experiencing a moment in history when women are determined to see women’s rights at the front and center of the political agenda,” Cavallo said.

“It’s probably the best time in history to be a rebel girl. But there is still so much to do.”

The third Rebel Girls book is already on the way, an interactive “journal to starting a revolution”.

It reached its crowdfunding target in just eight hours and will hit bookstores in early December — although backers on Kickstarter will get their copies earlier.

The authors have also branched out into podcasts, using famous voices to read out extended versions of some of the biographies.

Billionaire philanthropist Melinda Gates is one of the narrators, as is New York Times journalist Jodi Kantor who co-wrote the expose that first revealed the sexual misconduct allegations against Hollywood mogul Harvey Weinstein.

But what Cavallo and Favilli insist they won’t do is expand their brand into rebel books for boys.

“We feel it’s very important for boys to read books where they are not in the title. Girls have done that their whole lives,” Cavallo said.

“And a lot of boys tell us they love our stories. Many parents still feel they can’t give boys a book about girls. But that’s changing too.” MKH

We found the perfect book for your future feminist children