The story behind the visit of Padre Pio’s heart to the Philippines | Lifestyle.INQ ❮ ❯ 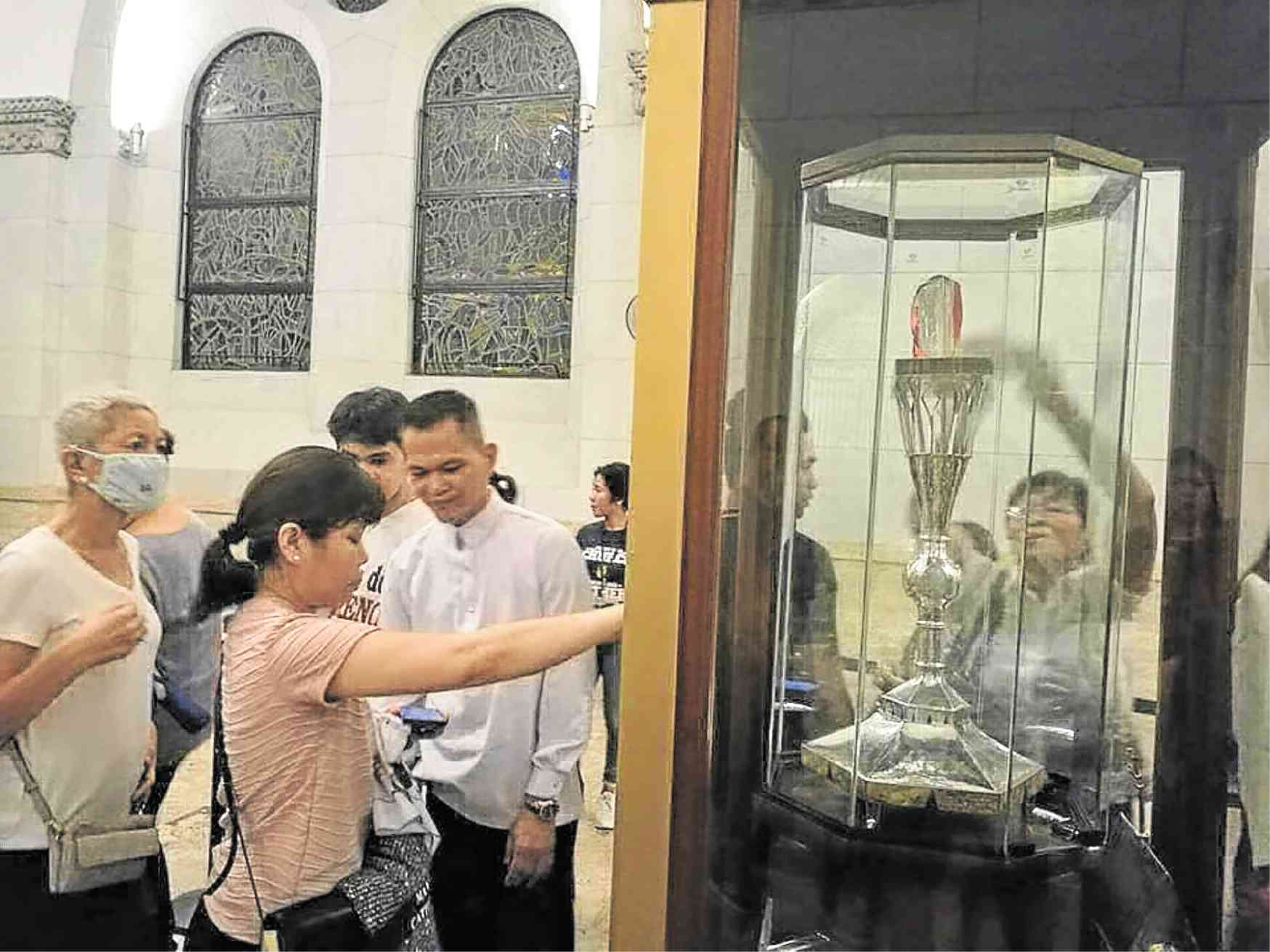 Devotees line up in the Manila Cathedral to view and touch the glass encasing the heart relic of St. Pio.

Two years ago, Angela Cruz wanted to visit the St. Pio Chapel in Quezon City and the National Shrine of St. Pio in Sto. Tomas, Batangas. This month, her wish was granted, but in a farther, significant place.

The 33-year-old event organizer joined a group of Filipinos that went to the Sanctuary of St. Pio of Pietrelcina in San Giovanni Rotondo, Italy.

The group, composed of leaders and members of the St. Pio National Shrine in Batangas, flew to Italy to fetch St. Pio’s heart relic for a 21-day visit to Philippines on Oct. 5-26.

This is the first time that a saint’s heart relic is visiting the Philippines.

The Philippines becomes the fourth country to host St. Pio’s heart relic, but this visit is the longest. The relic has been to the United States, Paraguay and Argentina.

The heart relic is one of a kind.

There are actually 23 first-class relics of St. Pio, said Fr. Jojo Gonda, parish priest and rector of the National Shrine in Batangas. “A first-class relic is one that is part of a saint’s body, or came in contact with the body—blood, hair, nails, skin, gloves, clothes.”

The heart is the whole heart of St. Pio, intact or incorrupt.

St. Pio, popularly known as Padre Pio, died Sept. 23, 1968. In 2008, his remains were exhumed. It was discovered that his body was incorrupt. “The heart was found popping out of the chest,” said Father Gonda. “That’s what we have now. That’s how special it is.”

Father Gonda, who has been rector of the Shrine for the past nine years, explained the heart relic’s Philippine visit. “On Sept. 18, we celebrated the centenary of the stigmata, the five wounds of Jesus Christ that appeared in Padre Pio. Sept. 23 marked the golden anniversary of his death.”

His group asked permission from the St. Pio Sanctuary, which is maintained by the Order of Friars Minor Capuchin (an extension of the Franciscans, St. Pio’s religious order), for the heart relic to visit the Philippines.

“But there were celebrations in Italy in September, so the Capuchins approved the request only this month.”

The heart, placed in a metal container called a reliquary, is encased in glass for viewing in the Philippines.

It required two Franciscans as caretakers, with intricate provisions for travel and security.

Father Gonda pointed out that “Padre Pio is the saint of the millennium. He died in 1968, so naabutan natin ang panahong ’yan. We have a lot of stories about him, including photos. He’s the only priest in the history of the Church to have a stigmata, the five wounds of Jesus Christ. He was also known for bilocation, mind reading, prophecy. So he’s very special.”

Many blessings and healing in different forms have been attributed to St. Pio. The National Shrine in Batangas, for instance, has drawn a lot of devotees, especially after Pio was canonized in 2002 by then Pope and now St. John Paul II.

Father Gonda said that lives have been transformed by the devotion to St. Pio: gamblers quitting their vice; separated couples reunited; childless couples having children; the sick healed.

What can devotees gain from venerating relics?

Father Gonda explained, “Saints are people who led a meaningful, holy life. Their earthly bodies are holy. They are symbols of our faith. We believe their souls in heaven can intercede for us. Our prayers reach them.”

Once in a lifetime

This visit of a saint’s heart relic is a first in the Philippines. “The bone relics of St. Therese have been here, the blood relics of St. John Paul II. And now, the heart of St. Pio,” Father Gonda said. “His heart is pure, full of love for God, Mama Mary, the Church. Maybe that’s why it never decomposed.”

Father Gonda considers the Philippine visit of St. Pio’s heart relic as a once-in-a-lifetime event. “I don’t think it will come back because the heart is very fragile. The volume of people touching the case, which causes movement, is dangerous. Italy regards it as a national treasure.”

For Cruz, the opportunity to join the Philippine entourage in Italy, as well as being present in all of the heart relic’s itinerary, is a miracle in itself. “I felt as if St. Pio was telling me, ‘If you can’t come to me, I’ll come to you,’” she said. “In Italy, I found myself kneeling and in tears.”

I myself spent time waiting with hordes of people who lined up to see the heart relic at the University of Santo Tomas Chapel and the Manila Cathedral. At UST, it took me three hours to get near it. I gave my hanky to a member of the security staff, who wiped it on the relic’s glass case.

The long wait was tiring. But moments after seeing the relic, I felt rejuvenated.

On Oct. 26, there will be a farewell liturgy and Concelebrated Mass at 9 a.m. at the Ninoy Aquino International Airport, before it is flown back to Italy.