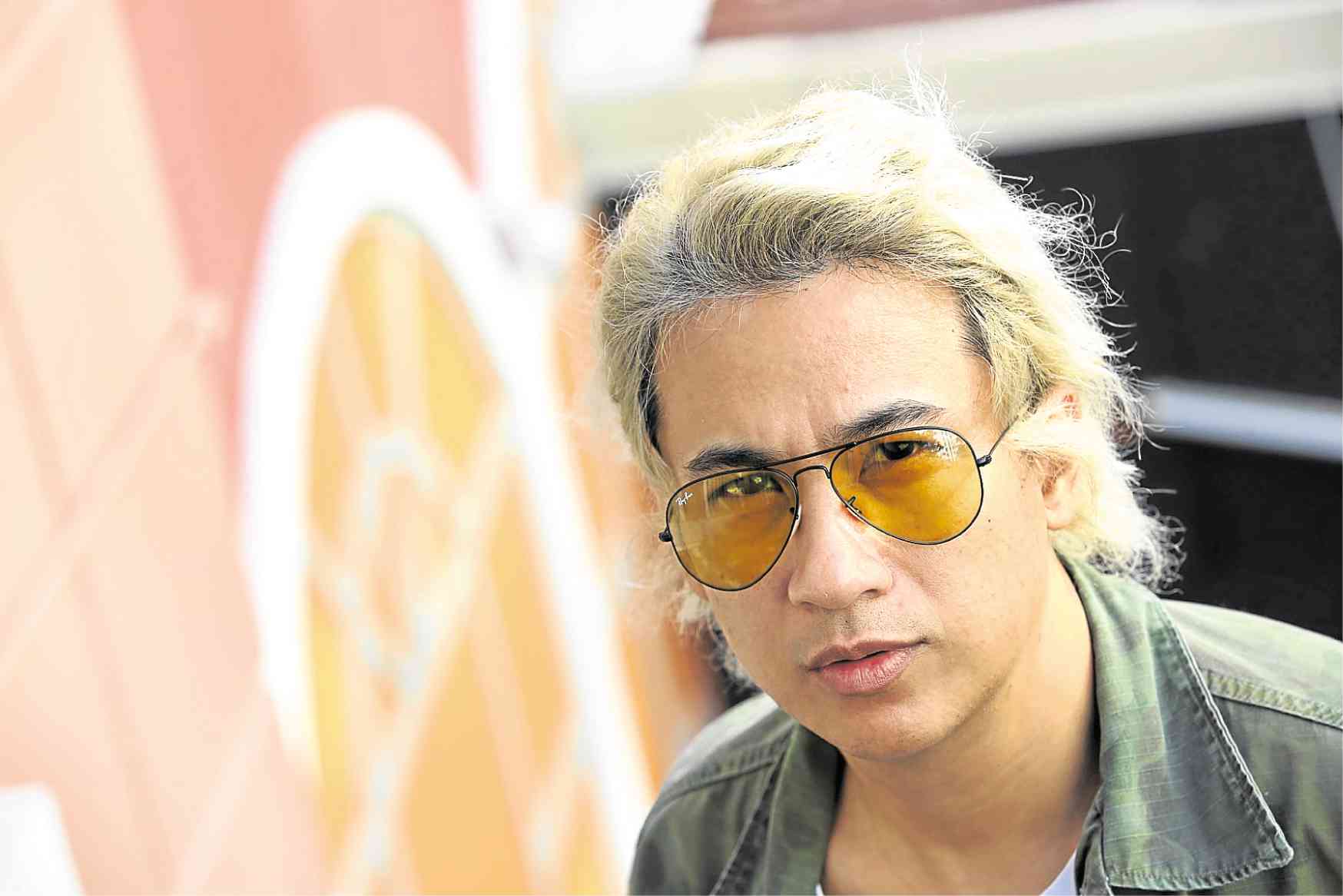 It’s good to be king.

Turning 48 in a couple of weeks, it looks like Ely Buendia is finally getting the hang of the musician thing.

“At my age, there’s so much new stuff to tackle,” he says. “It’s all about playing; a real musician would still be playing on his deathbed. Retirement is a word I would never consider.”

These days, the man likes nothing better than taking his Harley-Davidson Forty-Eight Sportster out of the garage and heading south to Tagaytay or Batangas for a relaxing jaunt with his riding buddies. It’s his stress reliever, he says.

What stress? When it’s time for Buendia to work, it’s still not work-work.

With his two bands, Pupil and the Oktaves, on hiatus for the time being, Buendia’s main gig these days is his funk and rhythm ’n’ blues outfit Apartel.

Described as a collision between Kool & the Gang and the Manila Sound (though VST & Co. were never this funky), Apartel has just released its second album, “Full Flood,” on Offshore Music, Buendia’s own label.

Chock-full of slinky soul grooves, the songs still exhibit the trademark Buendia wink-wink wit. (Check out “Pateros,” the band’s irresistible paean to the land of balut. The town should adopt it as its official anthem.)

They may not capture the generational zeitgeist the way the E’heads’ songs did in ’94, but these days, what does?

Pop music was always seen as a young man’s game, but there’s something to be said for allowing an artist the time to evolve and reach his or her maturity.

On the edge of something

“I feel right now I’m on the edge of something, I don’t know what,” Buendia reflects. “I’m riding another crest that wasn’t there before the dissolution of the E’heads.”

There’s no point in trying to relive past glory, he seems to be saying, not when the present seems to hold many new and exciting possibilities.

Musically, Buendia’s reach has always exceeded his grasp. Even at their peak, Eraserheads gigs could get pretty shambolic, the band straining at the limits of their abilities to live up to their material. The chaos was what made the good bits so transcendent.

With Apartel, he finally has a band with the chops to realize his songs in live performance, and he’s having a blast. The rhythm section—Ryan G on keyboards, Pat Sarabia on drums, Jun Lazo on bass, Coco Coo and Redge Concepcion on guitars and Deej Rodriguez on percussion—is tight like the proverbial tiger.

But it’s loose, too. A full horn section and three female backup vocalists expand the musical palette. Onstage, the songs have room to breathe, to stretch out.

Buendia laughs when I suggest that Apartel might be the new “dad rock,” considering that most of the original E’heads fans are now themselves middle-aged.

“That’s what we were trying to avoid with the new album,” he says. “We put in a few modern touches. Now it just feels natural. It’s come full circle. If you think about it, the E’heads were really a soul-inspired band more than anything else. If you listen to the songs, you can easily imagine them being sung by Rico J. Puno or Marvin Gaye. ‘Magasin’ was inspired by ‘Sexual Healing.’ It was just played in a very lo-fi, scrappy, punk way.

“But when I do my solo shows now and sing E’heads songs, it’s with a big band, horns, backup singers, and it sounds so natural. I was always into soul music. My favorite OPM artists were soul singers— Rico J., Apo Hiking, the Manila sound. Apartel sounds like me getting back to what I’m really good at.”

Buendia left quite a few E’heads fans scratching their heads when he started writing knottier, more challenging material for the sludgy guitar rock of the Mongols and Pupil.

“One of my proudest moments was when Pupil’s ‘Disconnection Notice,’ a song that doesn’t sound at all like the E’heads, penetrated that mass psychology—people were singing it on YouTube,” he says. “BMG didn’t even want to release it as a single.”

Apartel brings it all back to the poppier end of the spectrum. Through his “soul man” stylings, glimmers of the old, melodic Buendia shine through in songs such as “Mahiwaga” and “Pre-Loved.”

Last Oct. 4, Buendia and his business partners formally launched Offshore Music, which began as a label of convenience when Apartel released its debut in 2016.

Not a few eyebrows were raised when it was announced that Offshore releases would come out only on vinyl and as digital downloads—what, no CDs? Now of course, with CDs going the way of the cassette tape and vinyl records enjoying an unexpected resurgence, it makes complete sense—at least, as much as starting an independent music label can make sense.

The business plan, such as it is, now includes signing a stable of talents. The main criteria for choosing bands is that Buendia (and Offshore A&R Pat Sarabia) like them.

“Young artists—that’s where the party’s at,” Buendia says. “I still go out and catch new bands. I love meeting artists I can learn from.”

Music aficionados are also positively salivating at the prospect of Buendia’s extensive back catalogue being reissued on pristine, virgin vinyl. (A 180-gram Japanese pressing of the Eraserheads’ “Circus” or “Cutterpillow” would probably sell out in no time.)

Of course, Buendia’s paid his dues. Been paying them ever since the spark went out of the E’heads some time around the millennium.

“I felt oldest when the E’heads were on their way out,” he says. “I was lost, sort of disillusioned by everything. Nobody ever tells you, ‘You’re going to hit the top, then you’ll hit rock bottom, that’s the deal.’ Nothing prepares you for that, and if you’re not emotionally and psychologically prepared, it can hit you very hard.”

To paraphrase Dylan, he’s younger than that now.

“You’ve really got to go through that hurdle,” he continues. “I always say if you survive your 20s and your 30s, you’ll be fine. A lot of people don’t get past 27—you know, the 27 Club [referring to the rock stars who died at age 27: Jimi Hendrix, Janis Joplin, Jim Morrison, Kurt Cobain, Amy Winehouse]. Then you get to 30, and some other crisis hits you and you have to go through that.”

In Buendia’s case, it was two heart attacks and three angioplasties when he was in his mid-30s, followed by the breakup of his marriage.

“If you get through that, everything else is OK,” he says. “You just enjoy life as it comes.”

Of course, that doesn’t mean coasting on his reputation.

“I can’t buy into that idea that ‘You’re a legend, you’re an icon,’” he continues. “For me that’s death for an artist. I don’t want to be in that place. Even if you put the E’heads back together now—which we tried with that Esquire thing—it’s not the same anymore. It won’t have the same impact. I could just as easily have gone on writing E’heads-type songs after we broke up, and I would have been accepted.

“But somehow, I couldn’t bring myself to shortchange myself and my fans. They didn’t realize that I was doing it for them, because I felt it was my responsibility to show them that there’s more to life—or at least, to enjoying music—than listening to your old E’heads albums and reminiscing about your past.”

With Apartel, Ely Buendia just might win that argument.