New works by Rishab Tibon, Hermes Alegre to be unveiled

“I am particularly fascinated and interested in exploring the nature of the Mind—the conscious and unconscious modes and how they interact with each other… The mind is like a river constantly flowing and carries all kinds of images, thoughts, emotions, ideas and experiences that enter through the senses. They are loosely stored in the unbounded reservoir that is at once dormant and active, surfacing periodically. It is called the “stream of consciousness,” a term popularized by miodern novelists James Joyce and Virginia Woolf.”

Each is distinguished by a thin translucent veil that cascades down the visage of his portrayed subjects. For Rishab, the veil symbolizes the hidden nature of man.

His art may impress his audience as light-hearted, playful, even whimsical, but each carries a strain of philosophical significance.

Celebration of the female

From the start of his career,  Alegre has always devoted his art to the depiction of the Filipino woman as woman of the earth, the embodied feminine spirit. His celebration of the Filipino woman, in myth and fantasy, fact and reality, is always associated with the mystery of Nature, and as flesh-and-blood creature, her persona is charged with a seemingly conflicted  spirit: modesty,  reserve and repose  but concealing a capacity for carnal rapture. The Filipino woman is thus a provocative equilibrium of the spiritual and the physical. 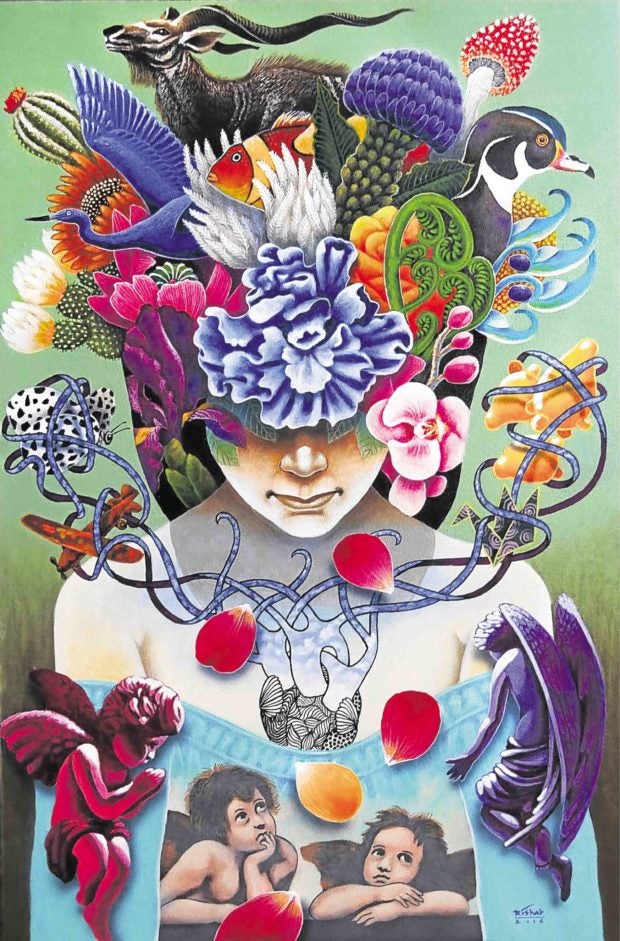 In his recent works, the artist contains all these simmering emotions  conveyed against the realm  of Nature. Presented by Galerie Roberto (tel. 8091630, 0998-5955764), the show titled “Foliage,” is an exultation of the beauty and mystery of the Filipino woman, with Nature as a vessel, permeating her entire presence, in fluid osmosis, as though her sensuous brown physicality,  were porous and permeable membrane.

The setting is an Edenic woodland, a universal space where masses of clustered leaves, luscious with dewdrops, envelope the Filipino woman, who weaves through the thick foliage in movements as quiet as a murmur, delighting in a tropical paradise of perpetual summer, by turns nourished and lashed by monsoon rains, and seared by a furious sun.

In “Foliage,” Hermes Alegre is moved to capture the physical and psychic vibrations of the Filipina maiden as emblematic of Mother Nature.