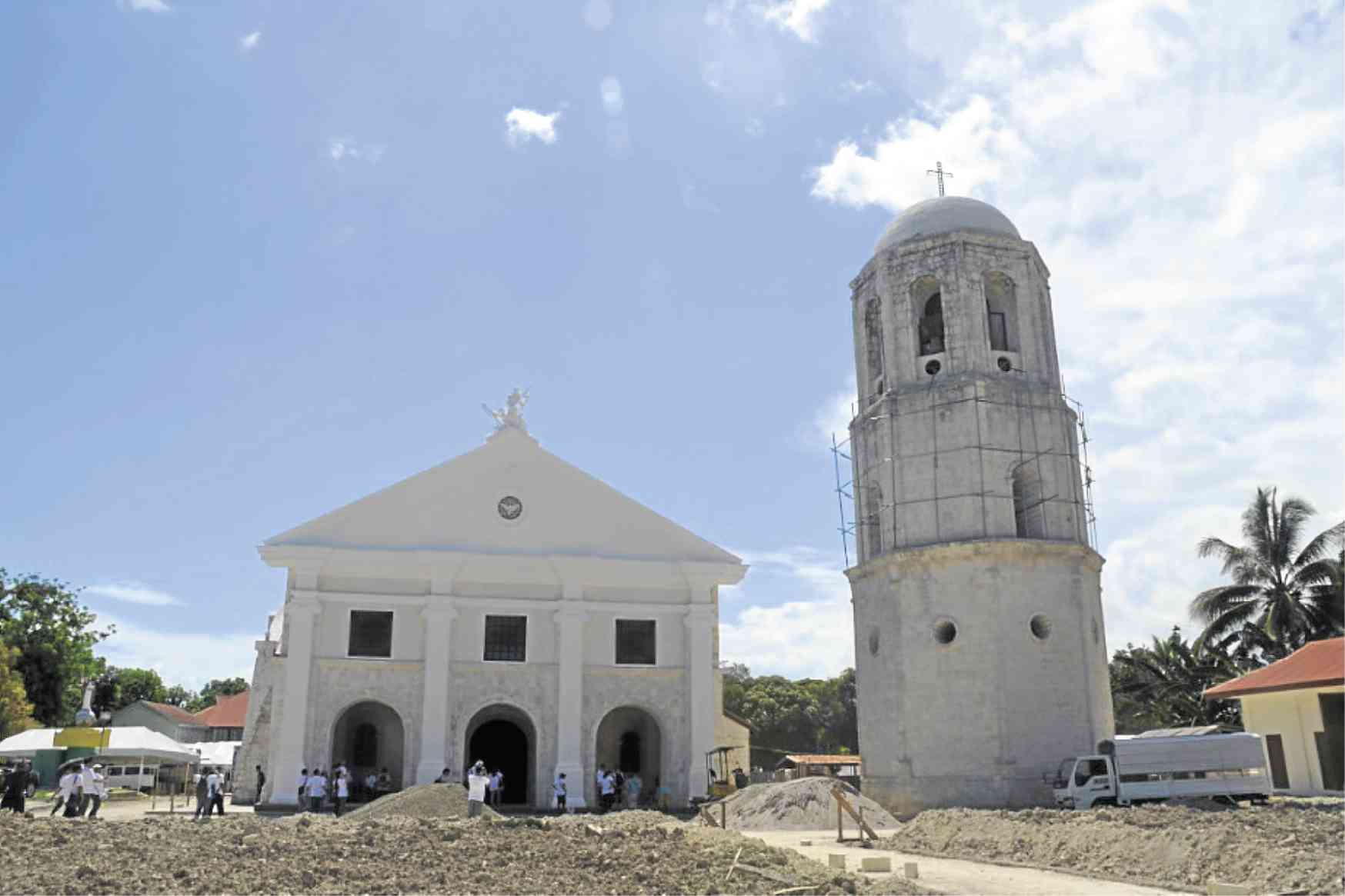 All structures assigned to the NHCP are already restored while NMP is still reconstructing a handful, mostly churches.

“NHCP-supervised restoration work on Baclayon, Dauis, Tubigon and Loay are 100-percent complete,” Fr. Milan Ted Torralba, head of the Commission for the Cultural Heritage of the Church of the Diocese of Tagbilaran, told the Inquirer. “They were restored as if the earthquake did not occur. No scar is visible on the church fabric. The NHCP has also fully restored the Pamilacan island watchtower, a National Cultural Treasure.”

Included in the Loay restoration is its Luis Francia ceiling paintings and the nearby Escuela delos Niños y Niñas and Casa Tribunal, and Dauis with its watchtower.

“The NMP has restored the watchtowers of Punta Cruz, Loay, Balilihan and Panglao, all National Cultural Treasures,” said Torralba.

Loay and Dauis structures were turned over to the Diocese of Tagbilaran and local communities in October 2017, while Baclayon was handed over to the diocese last February.

Loay’s escuela and tribunal buildings have been converted by the NHCP into the Museum of Boholano History and Heritage and Loay Conservation Laboratory.

Father Torralba said, “Parish churches were not the only items restored by the NMP and NHCP. Rectories (conventos) and all attendant ecclesiastical structures within the complex, including the open spaces, were also fully rehabilitated.”

“The Tagbilaran diocese,” Father Torralba explained, “also has a keen interest in the restoration of the watchtowers, escuela, municipio, presidencia and Spanish colonial period stone bridges and other civil/public works infrastructures, because these were also constructed or caused to be built by the Jesuits (1596-1768) and Recollect friars (1768-1927), the Bohol clergy’s predecessors.”

In Cebu City, NHCP had completed the restoration of the damaged belfry of the Santo Niño Basilica as well as Magellan’s Cross in March 2016.

NMP turned over to the Tagbilaran diocese the restored Panglao and Dimiao churches in February and August 2017; Alburquerque only last month.

Those that suffered heavy damage or were ruined in the 2013 earthquake—the churches of Cortes, Maribojoc, Loon and Loboc—saw a delay in reconstruction due to structural and geological issues, NMP said.

All these ruined churches are undergoing reconstruction with Cortes targeted to be completed in November, Loboc in May 2019, and Maribojoc (with stone stairway) and Loon in August next year as well.

“The NHCP has delivered on its commitment to restore the damaged churches, in accord with the scope of work defined in the contract it entered into with the diocese,” said Father Torralba. “I can also say the same, though unofficially, for our neighboring diocese of Talibón. The Tagbilaran diocese, in accord with the contract, commits to cause the restoration of other portions not covered by the scope of work of the NHCP and NMP, and to abide by the maintenance schedule recommended by the cultural agencies.”

“All things considered, it is not the mottled look of our churches that truly matters, rather it is the continuing faith of our people, in our persistence in carrying out our traditions, in our insistence on the continuity of worship,” he said.

“Now, with Loboc, Maribojoc and Loon [and Cortes] churches now undergoing reconstruction, we have reason to believe the patrimony we received from those who came before us will go on,” he added.

Father Torralba, who’s also executive secretary of the Permanent Commission for the Cultural Heritage of the Church of the Catholic Bishops Conference of the Philippines, commended the NHCP, NMP and National Commission for Culture and the Arts (NCCA).

He added that heritage work is a collaboration between the Church, the people and government.

“Heritage work in Bohol, with the assistance of the government, is the community work of all Boholanos, because heritage is us,” Father Torralba said. “If we want to progress, we must progress together. This is the experience of Bohol, our contribution to nation-building.”