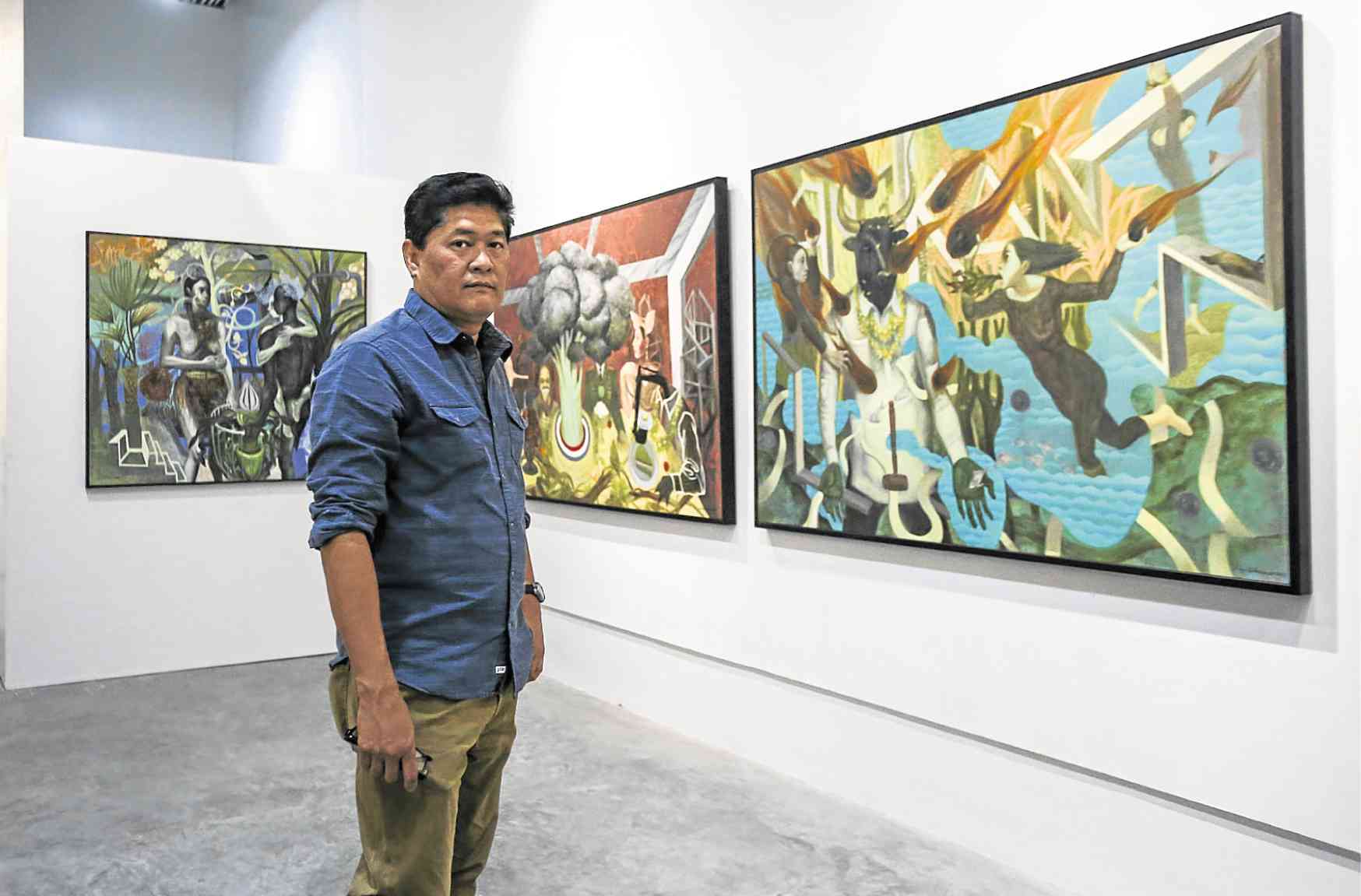 Bitancor’s works draw the viewer’s attention to aspects of the migratory experience that shatter or reinforce the Filipino’s attachment to his or her homeland, and the readiness to adapt to a new country. —PHOTOS BY JAMSTA. ROSA

US-based, multi-awarded Filipino contemporary artist Jeho Bitancor does not paint pretty pictures. Instead, the paintings that make up “Poetic Dissent,” his solo exhibition at the Iloilo Museum of Contemporary Art’s (Ilomoca) Hulot Gallery, are compelling visual stories, conceptualized through his feelings and imagination, and evoking issues of present society and the urban environment.

The value of Bitancor’s body of work lies in the richness in personal expression and clearness in its message: Art responds, is reflective, engaged.

Though some art may remain explicit in illustrating gritty urban realities, social realism, commentary and dissent have now moved on to clever, image-led narratives with symbols and signs, and personal imagery.

Bitancor’s early works, fresh out of art school at the University of the Philippines in the early ’90s, showed his preference for expressing the texture of the human experience. They addressed contemporary social realities and depicted the lives and everyday activities of ordinary people.

The paintings had a nuanced treatment of light and perspective and expressionist boldness that made them  almost luminous, despite the dark themes of hopelessness and deprivation.

They were not political, even if his works provoked debate. Instead, they were painted as he saw and felt them at that time. He favored quasi-surreal imagery, so I can surmise they were hardly decorative.

Bitancor’s Baler childhood in a family of creative, hardworking folks helped express himself through art.

His interest to draw sparked at an early age. Bitancor spent much of his formative years indoors instead of outdoors with friends. His mother, a public school teacher, would bring home calendars and magazines with colorful reproductions of Amorsolos, while his father would bring home donated art books filled with pictures of works by master painters.

The young boy would spend hours leafing through the pages of these books. He recalls one episode where he became obsessed with perfecting movement and the human anatomy by copying a poster of actor Fernando Poe Jr. holding a gun aimed sideways.

The young Bitancor challenged himself for days on end, trying to perfect foreshortening, and, in the process, he put FPJ in a frontal position with the gun facing the viewer. Already, his talent for representation was a skill that needed some serious attention.

“In high school and the early part of my college days, I saw the world through the eyes of Vicente Manansala, Cesar Legaspi and Carlos V. Francisco,” he says. “Later, I was drawn to the German expressionists like Otto Dix, George Grosz and Max Beckman, Francis Bacon and Dali.”

He found his artistic voice and developed his personal symbology through his studies at UP and by writing poetry. It took work experience, maturation and studies for his body of work to evolve.

A breakthrough came in the form of a residency grant to train under the Art Student’s League in New York. The years of being abroad saw his paintings becoming allegorical expressions, addressing new tensions of those times. They became signifiers of his own search for identity in a new setting.

“Poetic Dissent” demonstrates where he finds himself today. He gives deeper meaning to his art by recognizing the “poetic potential” of each subject or object, and highlighting society’s ills through his talent for juxtaposing universal, even mythical symbols, and transforming them into otherworldly forms in ethereal landscapes, on huge canvases.

He says: “I have always sought a balance between expressing my concerns as an artist and articulating my discontent as a human being. I believe that art must embody our highest aspirations in terms of expertise, intellectual rigor and imagination, yet must also be responsive to and reflective of the zeitgeist, the spirit of the times.

“I rely heavily on my imagination while employing juxtaposition, alteration and metamorphosis to create allegories, ironies, parodies and parallelisms… I believe that an artist’s contribution is his unique visual language as seen through his own mind, perceived through his own eyes and felt through his own heart.”

Today, Bitancor’s large-scale paintings depict themes that deal with Philippine migrant communities, contradictions and reflections on two worlds: his ancestral home and his adoptive one, aspirations and reality, man versus nature, conspiracy, displacement, resistance and assertion.

Creative, resourceful, and brave enough to push his art to connect people regardless of race, religion, political views, he goes beyond art for art’s sake. He treats art as an extension of himself, reflective of his social class’ standpoint, hopes and struggles, at the same time respecting other artistic expressions that redefine established notions, beyond the parameters of social investigation.

Bitancor is looking forward to a solo show in Singapore and a group exhibit with other US-based Filipino artists at Bliss on Bliss, an artist-run space in Queens, New York, this October.

“What excites me is the prospect of somehow introducing something new in each show, or in my art in general,” he says. “I maintain that insecure position of having a lot to prove still, and of having that perpetual challenge to come up with a major contribution to the development of art, and be rightfully recognized and rewarded for it.” —CONTRIBUTED

“Poetic Dissent” is on view at the Hulot Gallery of the Iloilo Museum of Contemporary Art until Nov. 7. Hosted by Megaworld Foundation and Megaworld Lifestyle Malls at the Ilomoca, the show is part of their commitment to promote works of Filipino artists to deepen the role of arts and culture in the development of their townships all over the country.