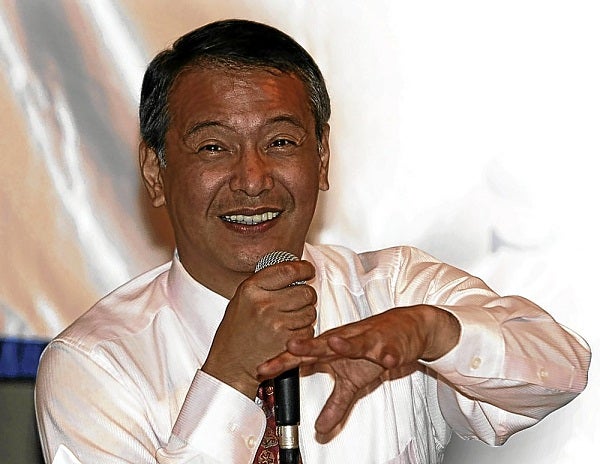 ‘He’s cute, charming, rides a motorcycle and makes house calls.” These were the incentives cited by Chit Roces, ‘S’ contributing editor, for me to meet and interview family doctor Jose Miguel Vargas Vergara.

And they were all confirmed on the second interview after I covered his lecture on disaster preparedness for the news section. Getting him to commit to a second meeting for Lifestyle was touch and go as certain days of the week he visits cancer patients in Cavite.

It was at his Loyola International Multispecialty Clinic on Katipunan Avenue that we reconnected, he greeting me with a full smile and bending down to buss my cheek. That was pleasantly unexpected that I had to text Chit: “It’s the first time a doctor made beso to me.” Her reply: “Yes, he’s cute. But beso-beso? Sobra na ’yan!”

No wonder elderly patients and those nearing senior citizenship seek out Doc Mikey. Although a UP College of Medicine graduate (batch ’84), where it was common for medical clerks and residents to see 50 patients a day within a three-hour consultation period at the Philippine General Hospital, he has naturally friendly bedside manners, the sort the old folks would describe as “I just see him or hear his voice, and I feel all right.”

Vergara denies that geriatrics is his field of specialization. It so happens that the Quezon City clinic originally began as a physical rehabilitation center, its patients, most of them the elderly, with chronic diseases (hypertension, diabetes, arthritis and cancer). They needed someone like him.

At a Rotary Club of Makati meeting at Peninsula Manila early in the year, a friend introduced Vergara, 52, as someone who initially did six months of rural exposure and immersion, then never left that phase for 20 years. After serving the less fortunate, he decided to return to Metro Manila and earn some money to support his family.

But this is a person who could’ve had it easy, growing up in the exclusive village of La Vista, then moving to Forbes Park, going to grade and high school at Ateneo, then on to UP Diliman for his Zoology undergraduate degree (the most difficult major for a pre-med student) and the US after graduation from medical proper to spend a year with his family.

He told his aunt, Corazon Aquino, that he would return to the Philippines, if she ran for President. He came back in ’85 to help with the campaign. When she won, he decided to maintain a respectful distance and serve in the provinces.

He admits that he didn’t specialize in a medical field after he got his degree in medicine. The searcher in him led him to take a graduate degree in missions at the Asian Theological Seminary in Quezon City so he could combine medicine and mission work in places like Cotabato and Tawi-tawi.

As a freshman in high school, he was already decided on being a doctor and a missionary at the same time. He tried joining the Jesuits, but he flunked after the third interview. He was being advised to contemplate in seclusion his decision to become a priest at the Arvisu House, but the sociable Vergara thought the alone time wasn’t for him.

But the desire to be a missionary remained. He volunteered to work in an orphanage in Negros Occidental at the height of the famine and malnutrition there, bringing two pieces of luggage, one for clothes and medical equipment, the other for books.

Before leaving, he disposed of his worldly goods, including $11,000 which he wired to his brother who was starting life in New York. He worked with a La Salle brother, Gratian Murphy, who took care of 304 orphans. (Murphy, now deceased, is being considered for beatification by the Catholic Church for his work in the Philippines.)

Put in his place

During one of his first clinic session, an old woman consulted Vergara about some bodily ailment. He examined her and wrote a prescription.

She peered at the piece of paper and asked, “What shall I do with this? Paste it on my forehead so it would stop aching?”

Taken aback, the doctor explained that she should go to Bacolod City and buy medicine. In all seriousness, the woman estimated how many hours she would walk to get there. She said she could get there by walking, but how would she buy the medicine since she had no money?

Vergara recalls, “I was put in my place. I wasn’t taught how to deal with this situation.”

What he did was to start a nutrition program so the people would not get sick. This he continued in his other rural work in Masbate, Quezon and Batangas. He calls it “bio-intensive gardening” which he also shared with pastors who evangelize in the fields so they would have an entry point into a community.

By teaching people to be self-sufficient in food, he says, they learn to scale up beyond the home consumption answered by 20 square meters of tillable land. Beyond 20, they can sell their produce or swap them for chicken.

In Pitogo, Quezon, a fifth-class municipality in the Bondoc Peninsula, where he moved right after a destructive super-typhoon in late 2004, uprooting his then pregnant wife to relocate there, he helped rebuild the community’s life and livelihood through a project called FAITH (food always in the house) where, through small vegetable gardens, families were assured of food 365 days a year.

The man in the house makes the garden, and the woman takes care of it without use of fertilizers and pesticides. This way they were able to keep the fat or nutrients of the earth. It is also a way of keeping produce in good quality.

In an island with no roads in Masbate, Vergara saw how successful home gardening was. “I’d go around in my motorcycle and pass by small farms. Men would wave their money at me to show me that they’re fine, that they’re earning.”

All that time in the boonies set rumors flying all the way to New York where his mother was told that he had died, whether in an encounter or because of the hard life, the family could not tell. His dad came home to the Philippines to arrange for young Vergara’s “burial” only to learn he was alive, happy and fulfilled.

He says, “You can say I was born with a silver spoon. I saw, however, that money isn’t the answer, that money wasn’t it. I was fortunate to see that there’s something more to life than that. I’ve always been a sociable boy, I still like making friends with a farmer, a vendor, a tricyle driver. Whenever I’m in a new place, the first thing I do is hang around in the market. That’s where you see the rich and the poor and their ugali (habits). You see what makes them happy.”

He dwells on the aspects of a person—body, mind and spirit—and what he says next is unusual for a man of science. “You neglect one aspect, and it affects the others. But the one single aspect that binds all is the spirit. Spirituality matters, I don’t refer to religiosity. I mean faith in God and love for human beings. It’s the two main commandments—to love God and your neighbor. Believe that God will take care of you, that He loves you beyond what you can imagine. Just say, ‘Love me, take care of me, and He will.’”

His eyes tear up, and at this point, I change the subject. We return to the care of the elderly at a time when advances in medicine and the quality of life have lengthened life spans.

He says, “The first rule for the old, whose bones are brittle, is this: Do not fall. They don’t see well anymore so the home must be configured to avoid their getting into accidents. Look for areas where these can happen like rugs that are loose or where a pet dog likes to laze on the floor. See to it that there are handles in the bathroom, and the bed isn’t too high.”

His other simple reminders are to always get hydrated (plenty of fluid intake) to minimize pains in joints and not to take too many medicines. He says, “The number one cause of death for those 80 and above is chronic use of nonsteroidal anti-inflammatory drugs that can lead to gastric bleeding which the patient cannot feel. Before long, he becomes anemic, weak and more prone to infection.”

What he has learned from Chinese and other Asian ways of healing is to “eat right, move right” to prevent disease from happening.

He practices what’s becoming known as integrative medicine. It’s a balanced mix of Western traditional medicine that is controlled and curative and Asian medicine which is preventive.

He observes, “Most Filipinos really prefer the Asian way, but they don’t know that there’s now a choice. Some doctors are lazy; they just match the symptom with a medicine instead of looking at a patient wholistically.”

Dr. Vergara holds clinic at Living Well on the fifth floor of SM Megamall in Ortigas Center and at the Loyola International Multispecialty Clinic at Elizabeth Hall, Katipunan Ave, QC. His e-mail is [email protected]