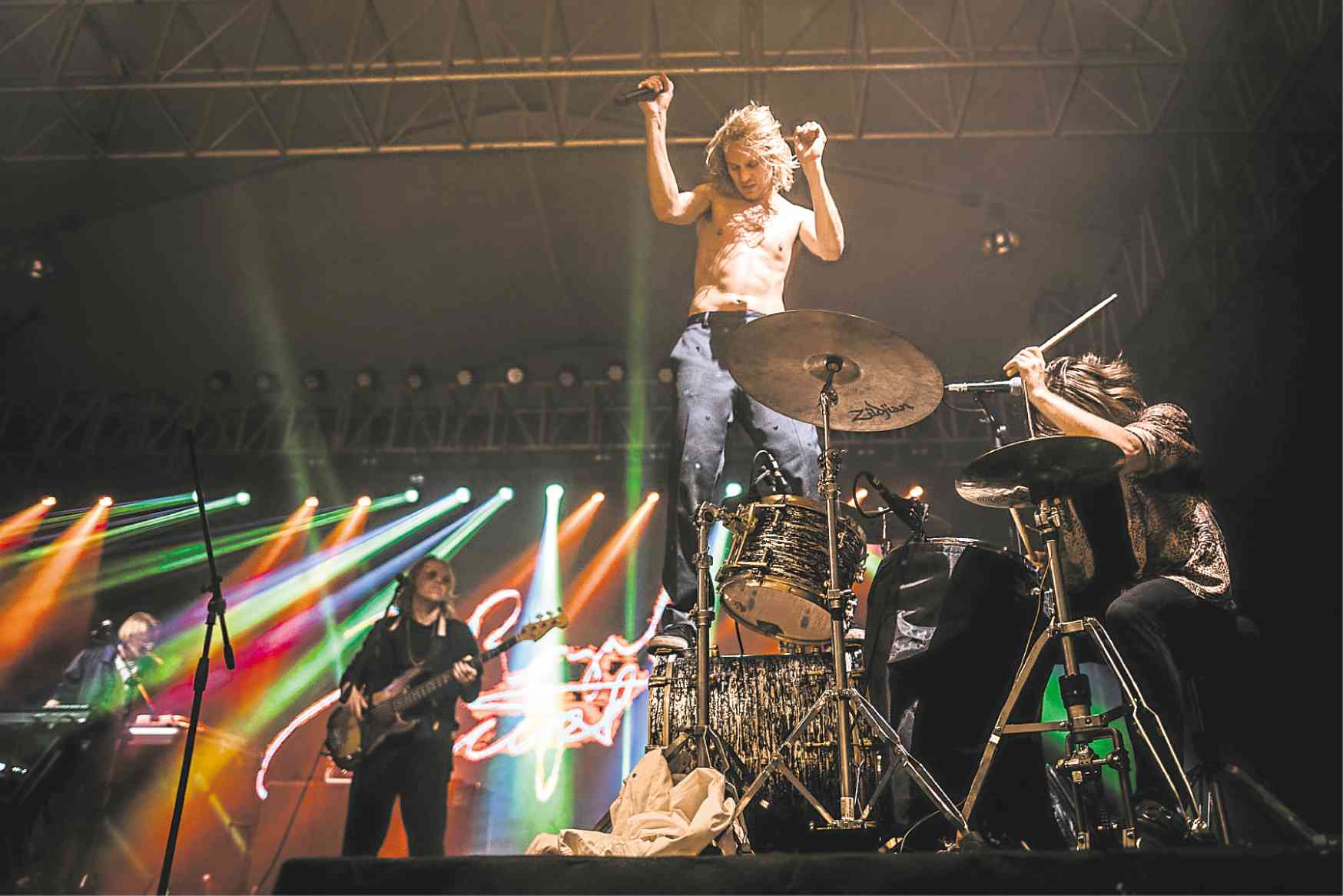 The unique voices of the Karpos Live Mix series

In under two hours, Swedish rock band The Royal Concept transformed the ABS-CBN tent in Vertis North into a bright, sonic playground with a performance that could have metaphorically blasted the roof down—on a freaking Sunday night.

The second installment of the Karpos Live Mix series was so electrifying that the band’s front man David Larson invited the crowd for drinks just after their blazing act so as not to lose the synergy between them and the Filipino crowd.

“This is probably the best Sunday night I’ve had and I grew up in church,” said Larson, as he tried to catch his breath after jumping from the top of the drums a few times. “Let’s stay up all night! Let’s find a bar and meet there and stay up all night!”

The four-man band—known for their YOLO-themed songs like “Gimme Twice” and “D-D-Dance”—opened their set with exactly just that. As if on cue, the crowd started dancing and banging their heads along.

To the request of fans, the band also sang “Damn,” a 2013 record that was not part of their original set list. Larson told the audience that they have not played the song in years, but killed their performance anyway with unbelievable adrenaline.

They also sang “Girls Girls Girls” and “On Our Way”—songs that brought them to stardom—and performed three songs,  including a new one, during the encore.

It was a homecoming of sorts for the Swedish band, along with local headliner Urbandub. Both performed for the Wanderland Festival in 2014 and 2017, respectively, and both were some of the best acts that ever graced the Wanderland stage.

Urbandub did not disappoint, and the crowd did not either. Front man Gabby Alipe thanked the fans for mouthing every word to their radio staples like “First of Summer,” “Evidence,” “Guillotine” and “The Fight is Over.” It was one hell of a ride.

The band from Cebu was surely missed by their loyalists, evident in the screams and jumps that the crowd offered. Urbandub has been in the limelight for 18 years, and surely has not lost any of its luster.

Karpos also offered the stage to the band Over October, which opened the night with songs from its latest EP, “Free.”

The three acts were a welcome departure from the usual way we spend our Sunday nights. For five hours, Karpos gave fans an avenue to celebrate good music, both local and international, in such an intimate space filled with strobe and neon lights. And just like that, we were left hungry for more.

It was a beautiful and brief homage to one of the country’s biggest pop-rock band by two of the most well-loved musicians today.

The Saturday show proved that, despite being relatively new to the scene (both debuted in 2015), they were more than ready to perform a set with 10 and 15 songs each, including their original compositions that brought them fame. Their performances entertained the tempered yet spirited crowd.

Indie folk band Munimuni warmed the stage for the two acts with their own brand of “makata pop,” before Benin finally started strumming her guitar.

The night was even more special for the singer-songwriter who, after a two-year hiatus, shared the stage once again with her dad Joey Benin, former bassist of classic pop band Side A. The father-daughter duo played four songs including “Blameless” and a stripped-down version of a new song called “Aliens.”

Benin also sang “Riverchild” accompanied by an interpretative dance by Sophia Paredes. This was followed by hits like “Parallel Universe” and “Easy,” a new song called “I Rose Up Slowly,” and ended with “Wrestle.”

You can feel the crowd breathe with Benin in her every falsetto. The 24-year-old crooner proved that the most beautiful voices do not always have to be big, but only have to be subtle. Atmospheric and intimate, her music has struck a chord with her audience.

But if Benin’s songs were better appreciated in silence, the nine-member ensemble Ben&Ben was welcomed with riotous roars.

The band opened their set with “Sunrise,” “Balikan” and “Susi” (theme song for the biopic “Goyo”) before delighting the crowd with six new songs.

The new tunes were relentless in their drive, and took advantage of the instruments they have at their disposal—Paolo and Miguel Guico’s complementing vocals and acoustic guitars, Poch Barretto on electric guitar, Jam Villanueva on drums, Agnes Reoma on bass, Pat Lasaten on keyboards, Toni Muñoz and Andrew de Pano on percussions and Keifer Cabugao on violin.

Songs like “Mitsa,” “Ours” and “Fall” have tightly woven verses that play on the universality of emotions, and were careened in the band’s distinct arrangement.

Ben&Ben ended the night high, deciding to play their radio staples last. The crowd, intoxicated with the familiarity of the tunes, waved their phones up in unison as the band performed “Kathang Isip,” “Maybe the Night” and “Ride Home.”

Paolo Guico shared that the Karpos gig was their longest yet and, while clearly overwhelmed, the band savored and enjoyed the performance that’s almost reminiscent of a mini-concert.

More than paying homage to their musical heroes—they gave a shoutout to local musicians who inspired them, including Benin’s father, Bullet Dumas who was in attendance, Sugarfree and Johnoy Danao—Benin and Ben&Ben’s performance was evidence that they were not mere convolutions of the music before them.

If anything, they showed that they have already found their own unique voices, and we are lucky enough to be there for it.