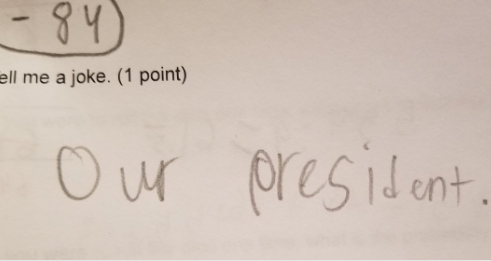 A teacher in the United States got very amused while checking papers recently, thanks to the witty and humorous answer of her seventh grader-student.

Evelyn Lizette shared on Twitter last Monday, Oct. 15, a part of the exam she gave the students, asking them to tell a joke for one point. One of her students nailed this part of the exam with two simple words: “Our president.”

“Grading papers. This legit made my night,” Lizette posted on the social media site, even tagging U.S. President Donald Trump. Her post quickly went viral, with over 6,000 retweets and almost 25,000 likes, as of this writing.

Grading papers. This legit made my night. @realDonaldTrump #Trump pic.twitter.com/MyZu2aykQR

Some netizens took notice of the student’s answer, such as ss (@shasimss) who wondered how old is the student, to which Lizette answered, “7th grader. Smart little guy.”

However, one netizen, trump’s BOSS (@NeverTrump1214), was a bit concerned, “Careful… I totally agree, but this could cause you trouble.”

“I didn’t make the question political. He did,” replied the teacher.

Meanwhile, netizen Marjorie Freedman (@mrfphd) was curious about how many points in total was the test, to which Lizette answered “50.”

And what was the student’s grade on the test? Lizette revealed that the student got an A. JB

Trump’s remark on having ‘natural instinct for science’ spurs reactions