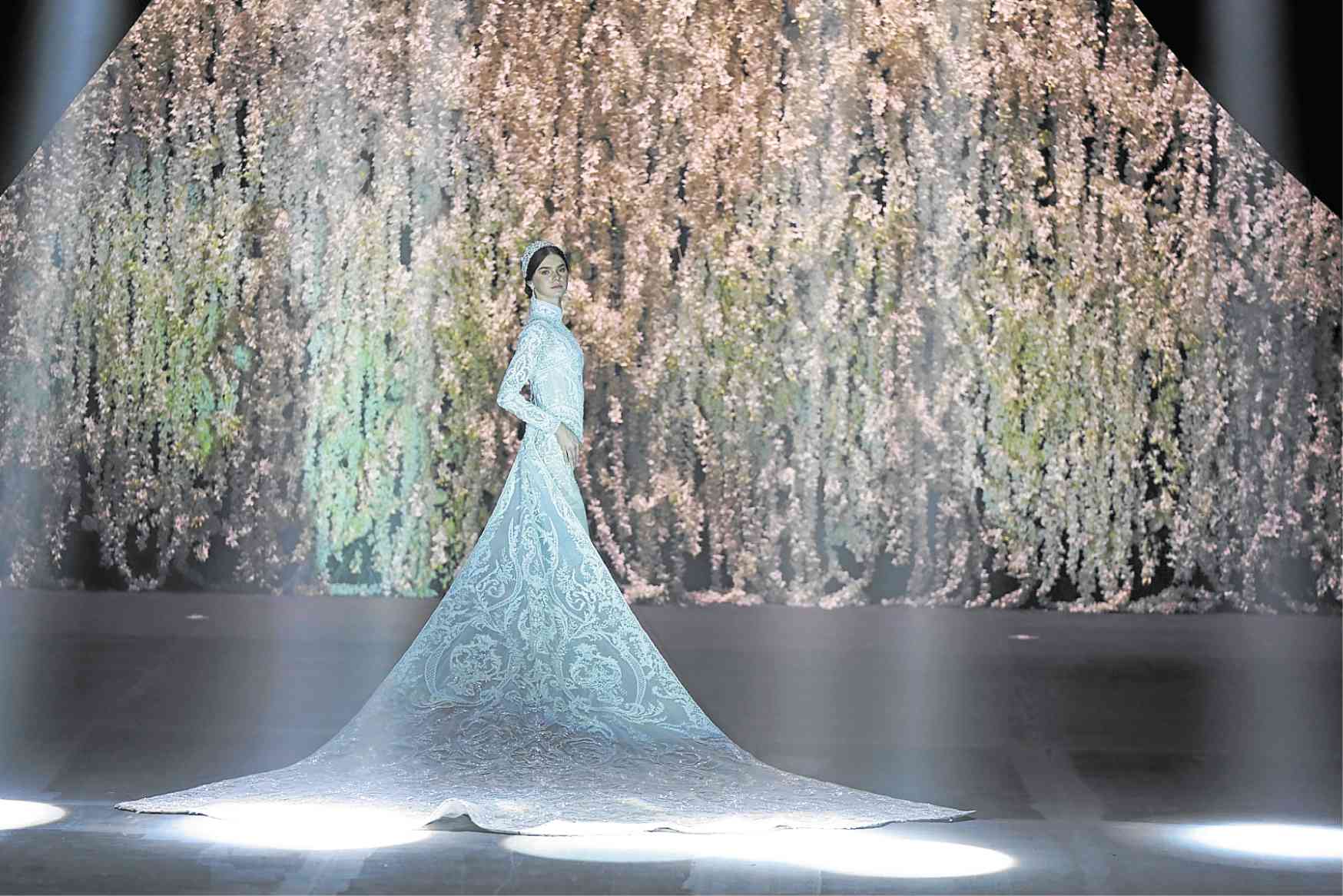 There was a frisson of excitement as guests began filing into the ballroom of the Waterfront Cebu for the culminating show of “Weddings at the Waterfront,” the hotel’s annual bridal fair which is celebrating its 20th anniversary this year.

The five designers were all smiles posing for pictures but they were well aware that this would be a fashion showdown—not that friendly at all—a visual war of sartorial prowess.

Michael Cinco, Cary Santiago, Ezra Santos, Francis Libiran and Furne One had been chosen  by the hotel and the co-organizer Santiago himself to cap the  bridal fair.

Santiago, Cinco, Santos and One are contemporaries who have made names for themselves in the Middle East, and are collectively known as the “Dubai designers.”

They design for rich clients who prefer their party frocks and wedding dresses to be technical marvels of delicate lace encrusted with beads and dripping with crystals.

Cinco opened the show with his trademark opulent looks—a feathered skirt topped with  jeweled cape, and a sheath with  dramatic long train. High collars, beading and boned corsets dovetailed into his inspiration of Victorian princesses.

“I’ve always been a game changer but I make sure to leave an immaculate and lasting imprint on the fashion industry,” Cinco said.

In his mirrored wraparound shades, he is always observing, training his eye on the different elements of his designs.

For his collection, he combined textures, colors and volumes in fabrics like lace, embroidered tulle and crystallized tulle.

“Most of them were embroidered and decorated by hand. Getting hold of such precious materials is not easy but results are always magical,” he said. 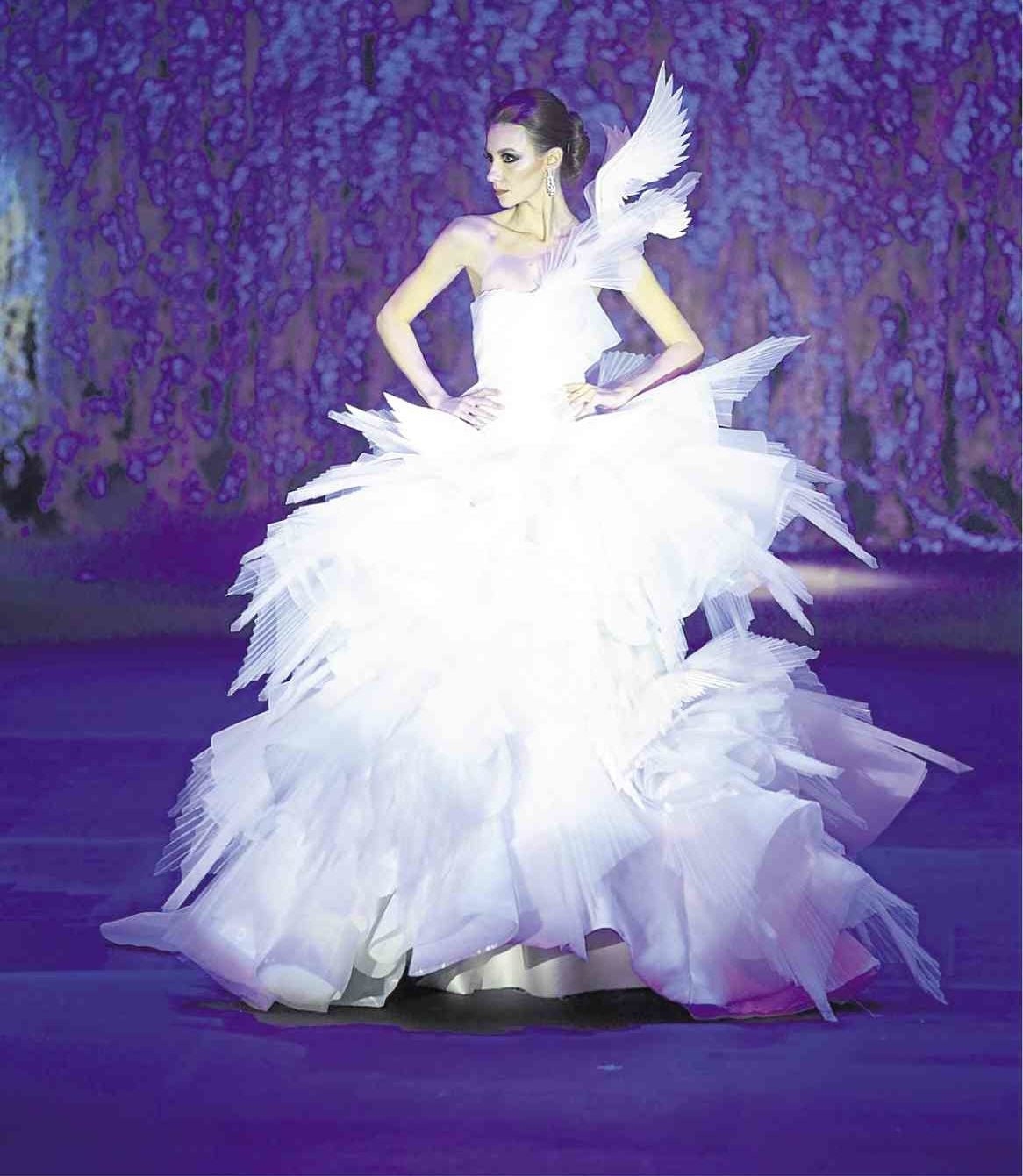 Santiago is known for his masterful way of manipulating fabric to create designs that are distinctly his. For his Red Charity Gala show several years ago, he used laser-cut images of the Buddha and other deities on golden fabric.

His most memorable creation, however, was a terno inspired by the Philippine eagle—which he named Pag-Asa—that bagged him the grand prize in the Philippine Fashion Design Competition in 2004.

“My passion has always been history and arts and culture. I also get my inspiration from traveling,” Santiago said.

Santiago’s aviary-inspired collection was an “ode” to one he had shown “but taken to the next level with the fusion of origami and pleating.”

Bird forms perched on shoulders and clung to skirts and bodices. The designer also shirred strips of fabric to make them look like feathers, a technique he employed with his award-winning eagle terno.

“I’ve always been fascinated by these winged creatures,” he said, listing those that flitted around his pleated dresses like parrots, sparrows, doves and a swan. Ezra Santos took the romantic and classic route with hourglass dresses but made of men’s suiting fabrics. They were cropped or fitted jackets over full skirts. Sass was factored into the collection with one midriff-baring look.

An alumnus of Slim’s Fashion and Arts School, Santos showed a deft hand in construction with full skirts and draped sleeves that looked deceptively simple. To complete the look, models wore veiled hats and grasped box clutches with their bejeweled gloves.

“Fashion design is a continuous learning process. You have to evolve,” Santos said. “As designers, we make mistakes but we learn and keep on striving to create designs that are very now.”

Santos started out making dresses for his high school classmates and considers the wedding dress he designed for his cousin as his first venture into professional design. “It was very classic—made of piña calado with a four-meter-long train and high-neck collar.”

That wedding gown was very different from what he’s doing now. “In Dubai, embroidery and beadwork with crystals are musts for brides, and the fabrics there are very luxurious and beautiful.”

Libiran said his collection was inspired by Philippine architecture. It consisted of separates such as feathered jackets and stiff skirts.

One model experienced some difficulty walking in her huge “petaled” skirt but bravely soldiered on, inching her way around the square-shaped stage.

“For this collection I wanted to go back to my roots as an architect. I was inspired by historical Art Deco structures designed by the great Filipino architects,” Libiran said. 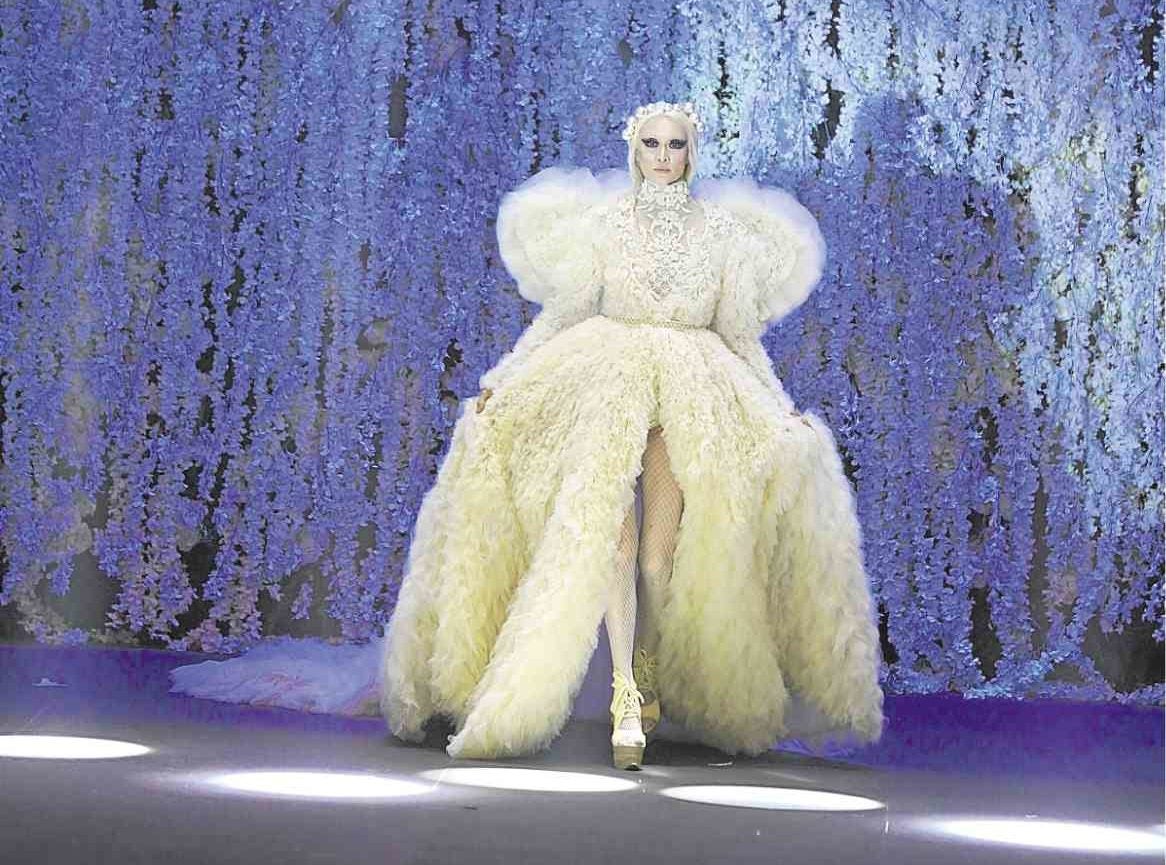 Furne One’s medieval-inspired collection for Amato Couture was one of the evening’s most applauded. From the moment veteran model Marina Benipayo stepped out in a blonde wig and clad in a voluminous coat, the audience was transfixed.

His collection, “Amor Vincit Omnia” (Love Conquers All), was inspired by the ornate architecture of cathedrals, Catholic vestments and religious iconography. One by one, his models strode out in dresses made of French lace, sackcloth and silk tulle, like blonde-tressed warriors. The theme from “Game of Thrones” served as perfect soundtrack.

The designer said he lined sturdy sackcloth material with satin to give his clothes heft and structure. He encrusted them with pearls in different sizes, and produced volume with the use of ruffles or rounded, exaggerated, almost wing-like shoulders.

“I’ve always looked toward the classic and feminine but I add some kind of twist to it,” One said. “My aesthetic has remained the same through the years: artistic, romantic and dramatic.”