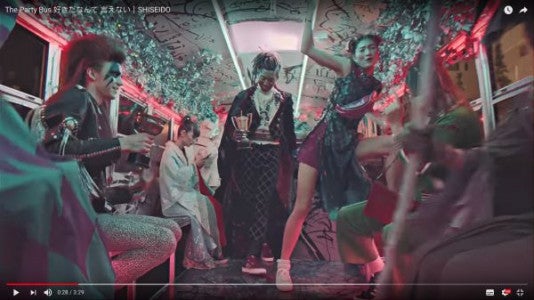 Shiseido has unveiled an imaginative new short film that explores the relationship between makeup and self-expression.

Dubbed “The Party Bus,” the film blends fantasy and animation to explore the power of makeup in the context of personal courage and revelation.

Directed by Show Yanagisawa, the film — a follow-up to Shiseido’s 2015 movie “High School Girl?” — features three protagonists: Princess Kaguya (played by model and actress Elena An), her lover Dracula (played by dancer and model ENDo) and a mysterious Samurai Zombie, all of whom are traveling on a party bus.

At one point Princess, who is struggling with feelings for both Dracula and Samurai Zombie, begins to cry, her tears mixing with the colors of her makeup and forming magical animations that dance over her face. As the production progresses, she is awakened to her true feelings and runs into the arms of the Samurai Zombie, played by Rina Fukushi, a former winner of Vogue Japan’s Women of the Year.

The movie follows the news announced this July that the Japanese skincare brand was set to relaunch its makeup range with a series of 16 new products. A re-launch of the brand’s foundation line is also scheduled to follow next year, with powders, concealers and primers set to debut in the fall of 2019. KM