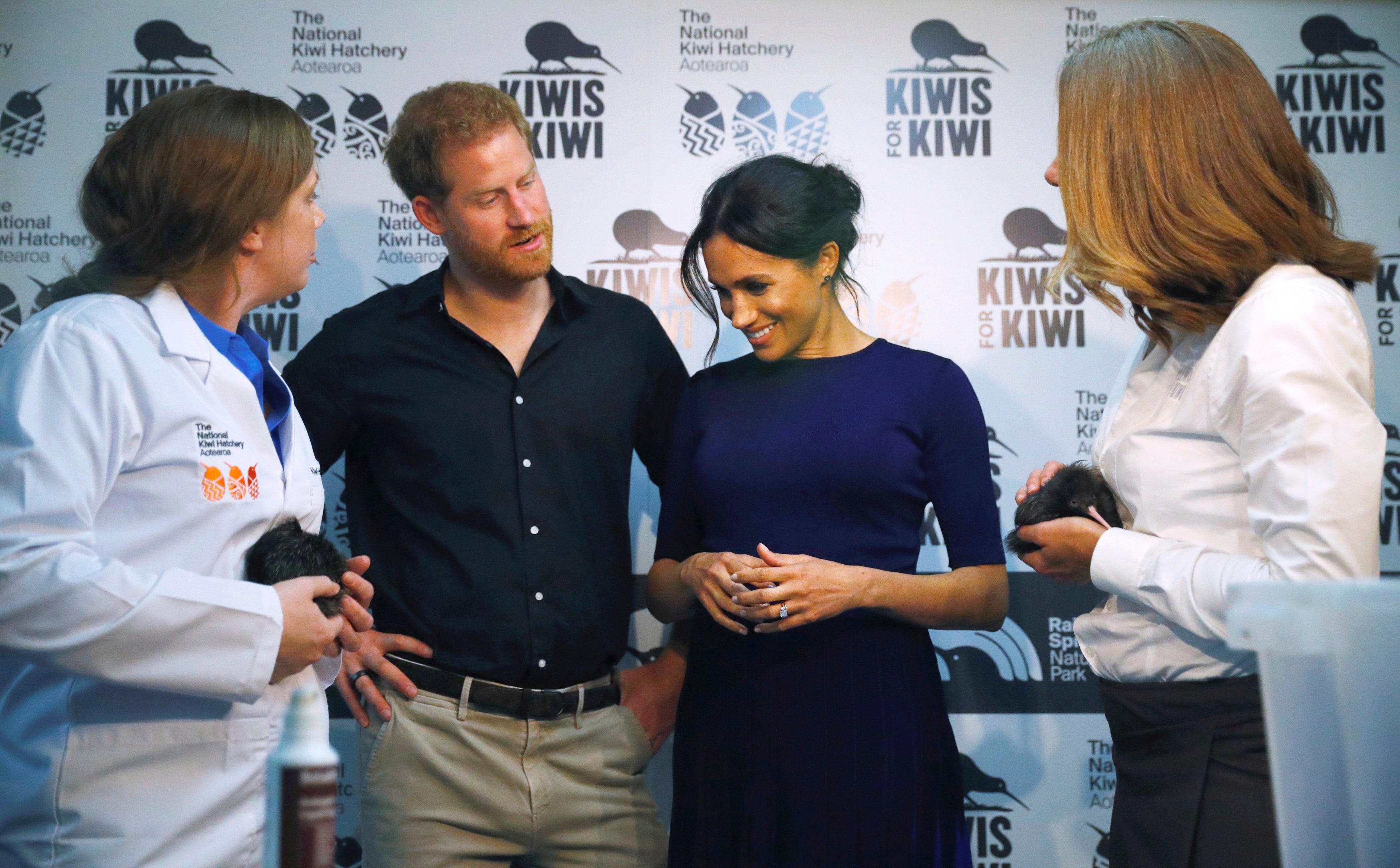 Britain's Prince Harry and Meghan, the Duchess of Sussex talk to staff as they look at kiwi chicks during a visit to the National Kiwi Hatchery at Rainbow Springs in Rotorua, New Zealand, Wednesday, Oct. 31, 2018. Prince Harry and his wife Meghan are on the final day of their 16-day tour of Australia, New Zealand and the South Pacific. (Phil Nobel/Pool Photo via AP)

ROTORUA, New Zealand (AP) — Prince Harry and wife Meghan examined the navel, nostrils and whiskers on New Zealand’s flightless kiwi bird and got to name two tiny chicks on the final day of their 16-day tour of the South Pacific.

The Duke and Duchess of Sussex visited a kiwi hatchery in the town of Rotorua on Wednesday and learned about the breeding program for the threatened birds, which are considered national icons.

They gave the 3-day-old kiwi chicks indigenous Maori names: “Koha” meaning “gift” and “Tihei” meaning “sneeze,” from the Maori saying “tihei mauri ora” meaning “the sneeze of life” or the right to speak. The names were gender neutral because their sexes haven’t yet been identified.

The couple also visited a Maori meeting grounds or “marae,” went for a public walkabout and strolled through a redwood forest as they finally enjoyed sunny weather after their stop in New Zealand had earlier been dampened with rain.

At the Te Papaiouru Marae, the couple attended a formal welcoming ceremony and luncheon and were each given striking Maori cloaks, or “korowai.”

Harry and Meghan arrived in New Zealand on Sunday after earlier visiting Australia, Fiji and Tonga. During public walkabouts, they have been greeted by hundreds of enthusiastic fans.

Prime Minister Jacinda Ardern said this week there seems to be little appetite for changing New Zealand from a constitutional monarchy that recognizes Britain’s Queen Elizabeth II to a republic.

“I do not pick up from the New Zealand public that this is high on their agenda. That this is an issue that they see of such importance that we need to be debating it in the current environment for New Zealand,” she said. “And I take my steer from them.”

On the trip, Meghan has shown she is prepared to continue speaking out about feminist issues in her new role as a royal. In Wellington, she gave a speech congratulating the country on becoming the first in the world to allow women to vote some 125 years ago. NVG

New Zealanders turn out to see royals despite rain and wind