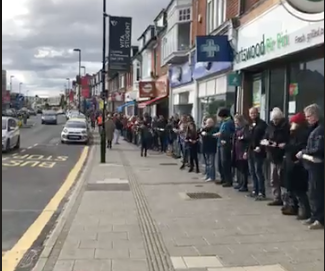 When October Books in Southampton, United Kingdom took to social media recently to ask for volunteers in moving books to their new store, they probably were not expecting that hundreds would actually show up to help.

But it was exactly what happened when more than 200 people came down to Portswood Road to help the community bookshop in moving to their new place. As per Thee Southern Daily Echo on Oct. 29, October Books has been operating since 1977 and was forced to move after a rent increase deemed them unable to pay for their old nook.

Thanks to their 200-plus-strong manpower, over 2,000 books were carried to their new store just down the block after the volunteers formed a human chain. 18,000 more books have yet to be transferred.

The amazing human chain was captured on camera by Stephen Jones, the brother-in-law of one of October Books’ shop volunteers, Clare Diaper.

In the video, Jones can be seen walking on the street, past the long, winding snake of a human line. Volunteers can be seen passing books one by one to each other, until they reached the new store down the block.

“A great video of the day from my brother in law, Stephen Jones, who came down from London to join the human chain,” wrote Clare via the October Books Facebook page on Oct. 29. “A huge thank you to all who took part. Clare.”

The volunteers themselves were nothing short of bowled over the display of collective action.

“It’s amazing. The power of community coming together and achieving something like this,” Jani Franck, an employee at The Art House and who took part in the human chain, was quoted as saying. “October Books have done really well. I’m in awe.”

The new October Books store will open to the public on Nov. 3. Cody Cepeda/JB