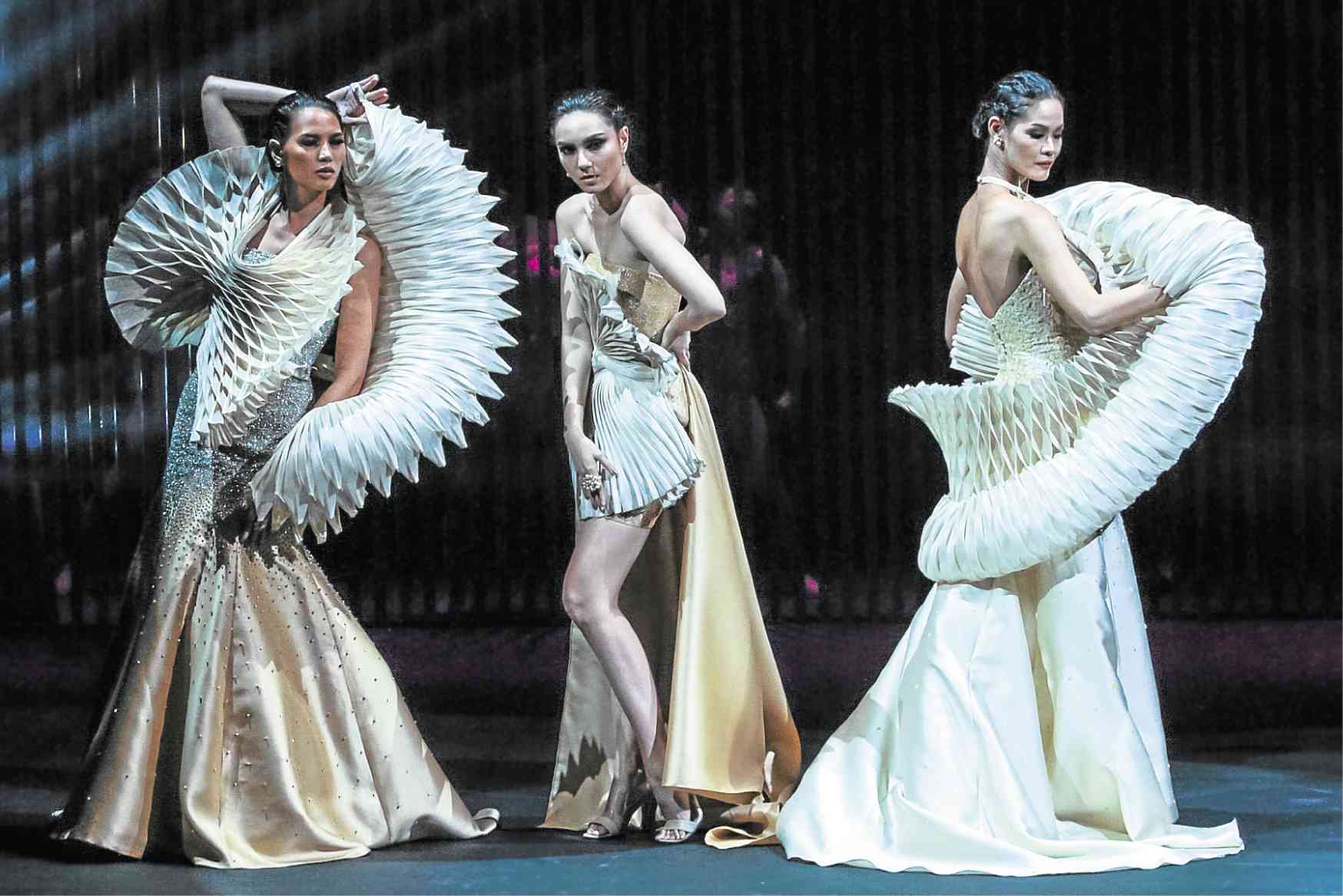 The Rajo Laurel story told in the strongest way, but…

Brevity is a virtue—and skill— many writers aspire to. It’s the sister of talent, Chekhov said; the soul of wit, said the Bard.

But Rajo Laurel isn’t a writer and feels that he’s not bound by that tenet. For him, if it takes as many clothes to get his story across, so be it.

Surely no one in the colossal grand ballroom of the Marriott who came to see Laurel’s Red Charity Gala collection, “Archipelago,” last Saturday could claim they were shortchanged. They came to see a show, and he served up quite a visual feast of a 92-piece collection—easily twice as many looks as any of all the other nine fashion designers who have presented at the annual fundraiser.

In that respect alone, Laurel, who was marking his 25th year in fashion design, had already succeeded.

You can’t diminish the amount of work, the cost, and the lengths he went to, to create such a massive collection for the 10th year of the gala. Most of the fabrics were created specially for him, 75 percent of them made of indigenous weaves.

Plenty of experimentation went into each, combining unlikely materials with local fibers—nylon with silk, plastic with raffia, leather with rayon —just to get the right softness or heft, the desired sheen or texture. In his words, it was his homage to the country’s crafts and craftsmen.

But presenting the breadth and range of his artistry and repertoire in one show, for both the fashion cognoscenti and his main clientele, proved to be the one folly of his efforts: His most winning ideas got lost in the sheer volume of the collection, the message muddled in the seeming absence of a narrative.
There were enough concepts as starting points for several, potentially strong collections.

It was his idea to create a large collection—100 pieces, later whittled down to 92. “I wanted to tell my story in the strongest way possible,” he told Lifestyle, thus the number of themes, ideas, concepts and techniques that went into play.

It was the curtain-raiser for a suite of natural colored abaca pieces that dramatically cosseted the models’ bodies.

We have seen other designers work on similar indigenous materials, and what Laurel did was show us just how much farther one can take local weaves in contemporary fashion—the purity of the material molded or draped simply on the body, the natural softness and structure revealing itself in the deft hands of the designer.

Laurel’s brand is glamour, and he delivered just that in a string of slinky evening sheaths beaded or digitally printed with island maps and abstract patterns.
There was also a series of jewel-toned evening dresses made of material pleated in the Fortuny tradition, a treatment he wants to revive.

Two of our favorites was a couple of trouser looks toward the end, worn under theatrical patchwork cloaks inspired by the vinta (boat sails).

His more exemplary pieces included the dyed, tasseled and fringed dresses and tops that employed the Narda Capuyan technique—Laurel trained under the late Baguio weaver.

There were also the graphic black-and-white sheaths ornamented with laser-cut alibata figures.

We thought he could have expanded more on these ideas, and weeded out some sections and saved them for a different collection (the silvery fringed suite, for instance).
No one doubts his ability to make desirable clothes. It’s the wisdom behind assembling such a multitude of ideas in one show that we found rather perplexing.

But Laurel is also an astute businessman, arguably the most commercially successful Filipino designer of his generation. It was a measured move to cover all bases with such a gargantuan collection.

“It was a conscious decision to add pieces to the collection that would be more relatable to my clients, which easily comprised more than half of the guests,” he said.
“The reason we show is to create desire and create a particular want for these things.”
Post-show, he already received orders for his “less editorial” pieces. His investment had begun to pay off.

He’s also forward-looking: in an attempt to appeal to a younger clientele —“the children or grandchildren of my clients”—he made three contemporary, pseudo-futuristic terno pieces, the voluminous butterfly sleeves of the national dress made of molded acrylic —the prototype of which took 14 tries to get right.

It was a very difficult process to tell his story, he said, to define what Philippine fashion is now. “All I can do was do my best and that was it.”