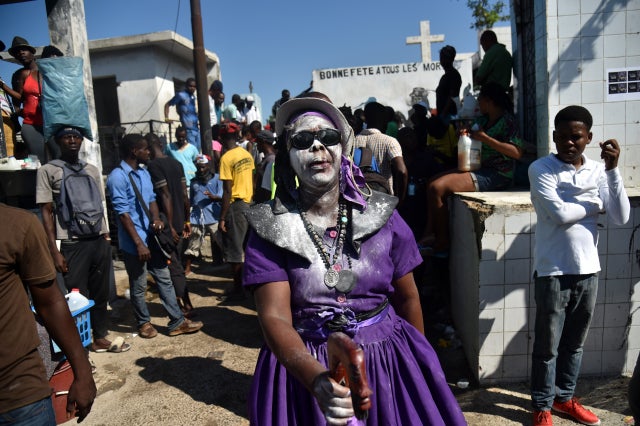 A woman in the role of a spirit known as a Gede attending ceremonies honoring the Haitian voodoo spirit of Baron Samdi in Port-au-Prince on Thursday. Image: AFP/Hector Retamal

In Haiti, voodoo celebration takes back seat to Halloween

A few people, their faces whitened with talcum powder, wander the alleyways of the cemetery in Port-au-Prince.

They are honoring the souls of the dead by dressing as voodoo spirits of death — a Haitian tradition that has faded over the years, under pressure from some Protestant groups and eclipsed by the more mundane pleasures of Halloween.

The Caribbean nation celebrates its special version of Day of the Dead on November 1 and 2.

As soon as you approach the entrance to the cemetery, the aroma of coffee fills the air, mixing with the stench of alcohol.

Voodoo practitioners pour liquor on the tombs of their loved ones and at the cross of Baron Samedi, which is found in every Haitian cemetery.

As legend has it, Baron Samedi — sometimes known as Baron Lacroix, but always dressed as a foppish undertaker with a top hat and tails — runs all cemeteries.

He often carries a walking stick seen as a “phallic symbol, as the Guede spirits represent fertility,” explains Erol Josue, a voodoo priest and the director of the national office of ethnology.

Between saying prayers and making offerings, some of the voodoo “spirits of death” seem to fall into a sort of trance, drawing the attention of curious Haitians and foreigners.

“As they come from a cold world, the world of death, the spirits drink a lot of alcohol with hot peppers,” Josue said with a laugh.

“They dance to traditional rhythms with exaggerated hip movements to make fun of the prudishness of men who have secret lives at night.”

Drinking and dancing on the remains of the dead is what has angered some Protestants.

Not far from the cross of Baron Samedi, two men — Bibles in hand— beg passersby to forsake the devil and “return to the path of righteousness.”

Haiti is traditionally a country where either Catholicism or voodoo is practiced. But over the past 30 years or so, more and more Baptist and Pentecostal churches founded by US missionaries have cropped up.

For Josue, “Protestants who refuse to accept this homegrown culture in Haiti are attacking our democracy.”

A byproduct of the growing Haitian diaspora in the United States is the increasing popularity of Halloween — in some local schools, it is more popular than traditional festivities.

Edine Celestin, a 34-year-old photographer, said she was caught off guard when her four-year-old daughter asked her for a witch costume.

“She’s been sold on this holiday as if it were universal. When I told her we did not have Halloween in Haiti, but instead the festival of the spirits, she told me no, that her teacher had said otherwise,” Celestin said.

“She was disappointed and sad,” the mother added.

“I obviously want her to understand other cultures, and for her to respect them as much as she does her own,” Celestin said.

“I’m not against the idea of celebrating Halloween, but substituting it for our celebration of the spirits? That makes me furious.” CC

To avoid fight with spouse, eat a snack