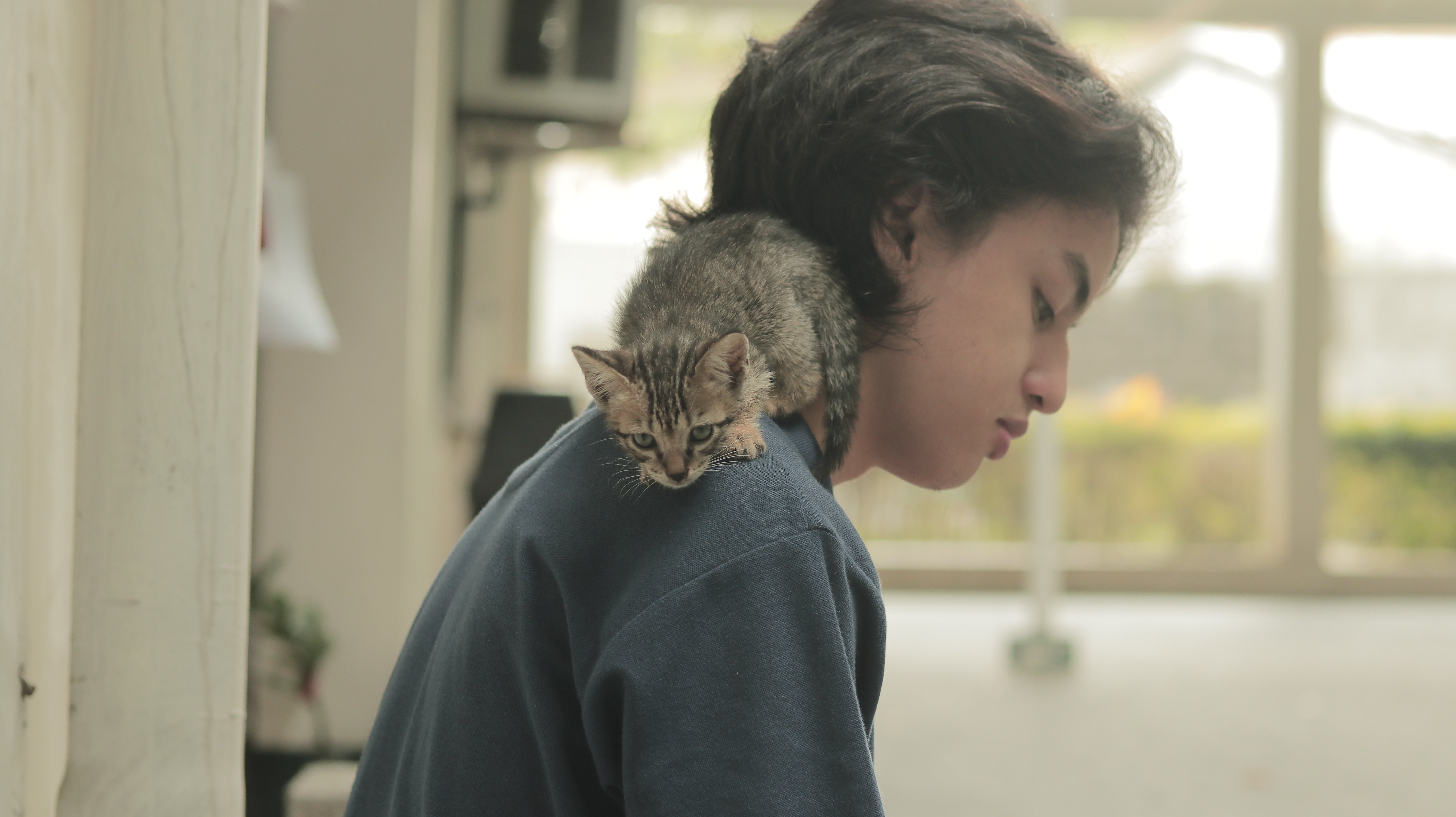 A kitten feels at home on a student’s shoulder. —TRIA CASAS

Archer, Animo, Felix and Chocnut are just four of over 80 cats that are fed daily at De La Salle University (DLSU).

DLSU students, professors, staff, or even guests and visitors have encountered some of these felines on the campus premises. Many are curious about how these cats are maintained and taken care of.

DLSU has an organization for cats: Professors for the Upliftment of Society’s Animals, or DLSU PUSA.

It looks after the welfare of stray cats on campus. Under the Office of the Vice President for Lasallian Mission, DLSU PUSA was established in 2015 and comprised of student and professor volunteers.

Called “PUSApporters,” they go around the campus to feed and take care of the cats. The cats are fed, and vaccinated and neutered as well for health and sanitation.

Laureen Velasco, PUSA founding member and DLSU professor, said that in her home in Cavite, she started her own neuter-spaying, given her passion to help animals.

“When the chairperson came to my house to bring some of the rescues, she asked, ‘Why don’t we do this at La Salle as community service?’ So it was presented during the summer workshop to the department for approval.”

DLSU PUSA’s funding comes from the pockets of the core members themselves and from the fundraising activities and donations made. Velasco clarified “We negotiated to be allowed to take care for the cats at no cost to the university.”

“We may be one of the only teams with faculty, employees, alumni, and students from SHS, undergraduate, masteral and doctoral studies—all working together for the sake of these animals.” Velasco added.

In 2015, the organization was approved.

Velasco said there are 17 feeding areas at DLSU, and although there are some 80 cats on campus, DLSU PUSA feeds about 100 cats, some of them coming from Leveriza Street near the school.

“We have about seven indigent cats,” she said.

The cats are vaccinated.

“The MOA (Memorandum of Agreement) with Cara Welfare has been approved for the next neuter-spay event,” she added. “We have a funding for 70 anti-rabies shots and we also have funding for 60 loitering cats and dogs. We’re going around the neighborhood because the strays are coming from there.”

On an average day, Velasco revealed that the cats eat a combination of two to three flavors of cat food. “We have about two to three kinds of Kibbles that we interchange and mix, para hindi naman magsawa.”

The cats are fed by the PUSApporters every day, even on weekends.

Many of the cats are up for adoption, with the older cats having less chance of getting adopted than the kittens. “You know, because the kittens are so cute and they’re small,” said Velasco.

We asked Naomi Perez and Alexandra Orbeta, both PUSApporters and DLSU students, what it’s like to have cats on campus.

Perez said, “I think the cats are great company. These creatures make me extremely happy, especially during bad days.”

Orbeta said there isn’t a dull moment with cats and their unique qualities. “Unlike feral cats that are skittish and would run toward the nearest hiding spot, I find that most of the cats at DLSU are used to seeing a lot of people walking around. They’re relaxed and seem to enjoy it whenever people give them attention.”

Asked about their encounters, Perez said: “I have too many good experiences with the cats, but my most memorable was when I was having an extremely bad day and Laureen, the calico cat in the Velasco area, approached me and sat on my lap. Although I got pins and needles from the long duration of her on my lap, it was so touching for me because she made me feel better.”

Orbeta said that although she experienced the occasional play biting, she hasn’t had any serious injuries from playing with the cats, keeping in mind that they are temperamental creatures.

“Forcefully invading their personal space or being too rough will inevitably lead them to lash out,” she said.

“My best experience was when I volunteered to foster Pepper—one of Pusa’s rescued kittens. At first he barely did much because he was very sickly, but after three weeks of taking care of him, his health returned and he became very sweet and handsome.”

Velasco added that she, too, has more than 80 cats at home. She has a helper who takes care of the cats while she’s at work.

“But when I’m at home, I help especially in bathing the cats,” she said.

Velasco admitted that she was the last person at home to become a cat lover, but she turned out to be the most passionate for the animals.

She recalled the first time she fell in love with cats: “Someone gave us a Persian cat which I found very cute, and that’s where I got hooked—they’re lovable pala.”

In time, she said she encountered many cats all over the world “that really touched me.”

Asked what she wants people to know about DLSU PUSA’s advocacy, Velasco said: “I wish they would know the joy of loving an animal, and that they would open their hearts. Animals have a special way of giving. There are people who love animals more than other human beings!

“It challenges your capacity to the core and your capacity to love—I’m not saying it’s all roses. It’s a lot of work and a lot of expenses. Sometimes you are sleep deprived and it can affect your time, money, everything. But it’s worth it. That is what love is.”