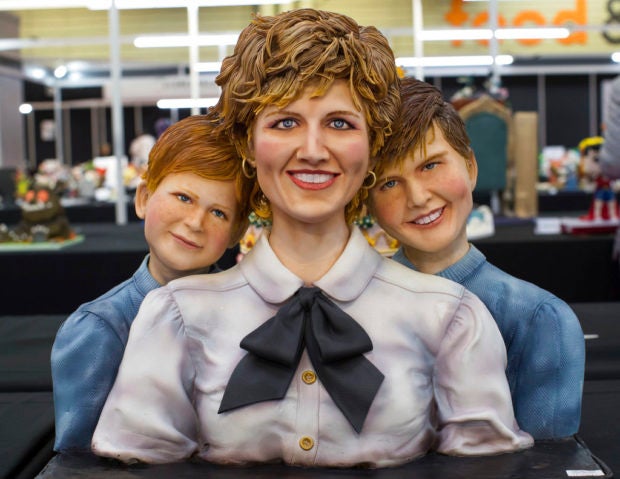 A cake in the likeness of Princess Diana, with sons Prince Harry, left, and Prince William on display during Cake International, The Sugarcraft, Cake Decorating and Baking Show, at the NEC in Birmingham, England, Friday Nov. 2, 2018. The show runs until Nov. 4. (Aaron Chown/PA via AP)

LOOK: Diana, her sons and Meghan featured in cake competition

LONDON — There seems to be a bit of a royal obsession on display at the Cake International exhibition taking place in Birmingham in central England.

There was an oversize cake depicting the late Princess Diana with her two sons Prince William and Prince Harry.

There’s even a life-size cake of a grown-up Prince Harry with his wife Meghan the Duchess of Sussex. This particular cake was baked by Lara Mason, who said she spent 250 hours to make the dessert, as reported by The Daily Express.

Mason also said that it was not her first time to bake a cake replica of a member of the royal family. She previously did Prince George, who she said it took her 30 hours to do.

The eye-catching cakes feature in a three-day cake decorating and baking show that includes a number of prizes in various competitions. MKH