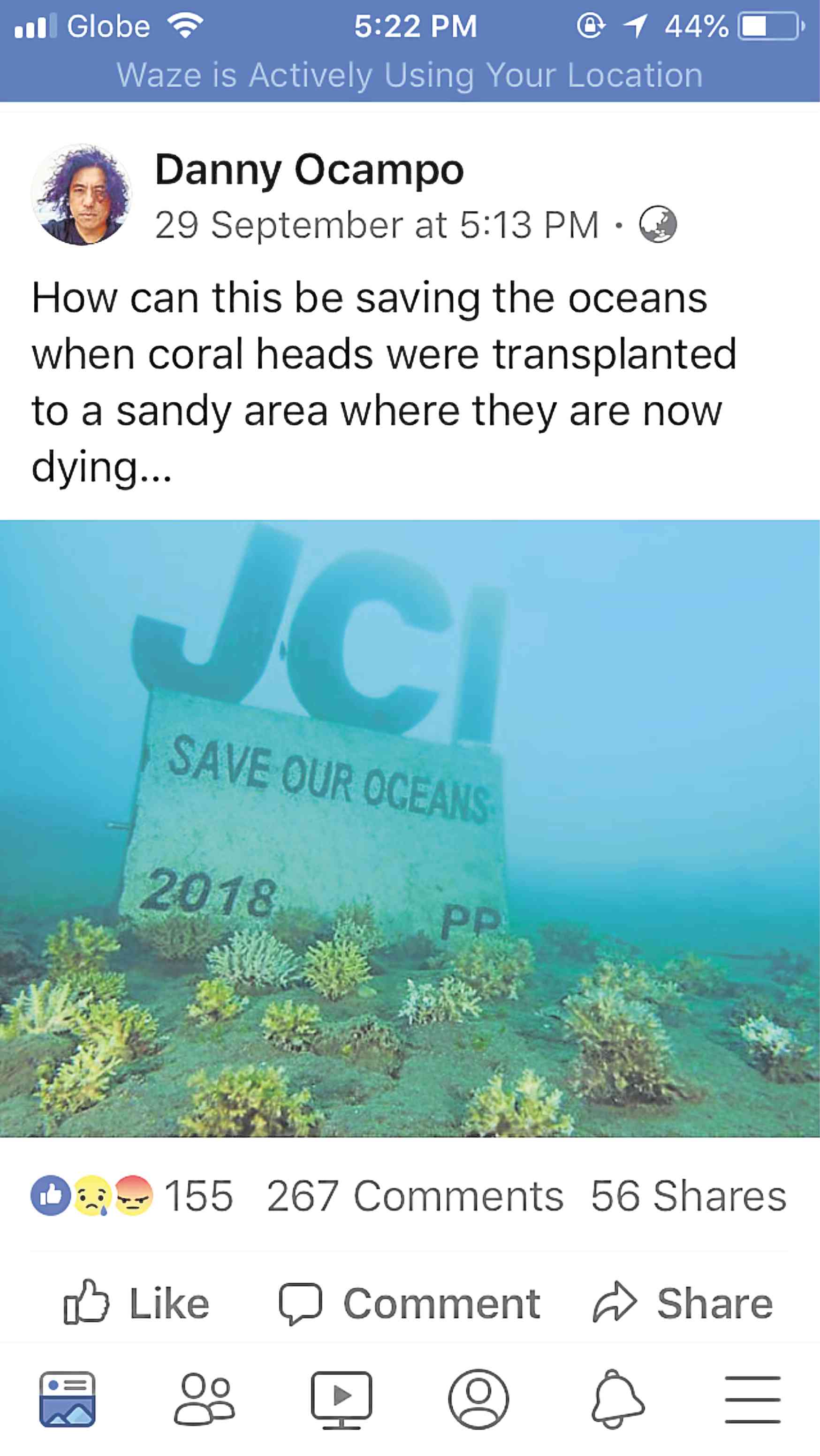 It all started when environmental worker and underwater photographer Danny Ocampo posted a photo on Facebook, calling attention to the corals replanted beside this underwater “monument” in Anilao, Batangas.

“How can this be saving the oceans when coral heads were transplanted to a sandy area where they are now dying?” wrote Ocampo, who has had vast experience in coastal resource management and marine habitat protection with local and international nongovernment organizations.

Ocampo and some friends went diving in the well-known site, Basura, last Sept. 29  when they came upon the monument.

“Through the years I have observed efforts to do coral transplantation and coral nurseries, but these have been mostly failures and just led to the death of corals,” Ocampo said. “I have called these out on my Facebook page posts… The question posted was to draw attention to the coral heads on the sandy substrate since they were obviously dead or dying.

“It was also meant to call attention to the issue at hand: that there are projects with good intentions that are sometimes doing more harm to corals, and that coral transplantation and propagation need to be planned carefully and with the advice of experts, if it’s at all needed.”

The problem was when several individuals, in defense of the civic organization, pounced on Ocampo, questioning his credentials and accusing him of being misinformed; there was even a demand for him to take the post down. This, despite the fact that the experts are on Ocampo’s side.

“Definitely not sound, because corals don’t normally grow on sand,” noted coral expert Dr. Wilfredo “Al” Licuanan of De La Salle University, who cited Republic Act No. 10654: Section 96 on the Ban on Coral Exploitation and Exportation: “It shall be unlawful for any person or corporation to gather, possess, commercially transport, sell or export ordinary, semiprecious and precious corals, whether raw or in processed form, except for scientific or research purposes. It shall also be unlawful for any person, corporation or entity to commit any activity that damages coral reefs.”

The organization’s president met with Ocampo and other marine advocates, apologizing for some of the reactions. The site was apparently part of the group’s Monument Project; the effort even received an award from the organization’s local leaders.

Unfortunately, some people are still insisting this was done correctly, and that the transplanted corals are still alive. This prompted Ocampo and fellow advocates like photographer and tourism executive Yvette Lee, Anna Varona of the Clean Our Oceans Project, and others to submit a letter of appeal to the Department of Environment and Natural Resources (DENR) and the Bureau of Fisheries and Aquatic Resources (BFAR).

“The Philippine coral reefs are crucial to global marine biodiversity,” the statement reads. “We have over 500 coral species documented and more to be studied. Which leads us to the purpose of this letter: We implore government agencies to regulate coral propagation projects. Groups should be accredited according to their background, purpose and method.”

Any effort to help bring life back to the ocean is welcome, but it obviously requires more solid science than people care to admit. For some concerned citizens, however, it’s the idea of an intentionally submerged monument that is equally alarming. The ocean is already full of stuff that doesn’t belong there; a permanent piece of underwater marketing leaves a very bad taste in the mouth.

So election season is upon us—does this mean we will be seeing candidates’ faces on underwater billboards, as well? Pardon us while we barf.