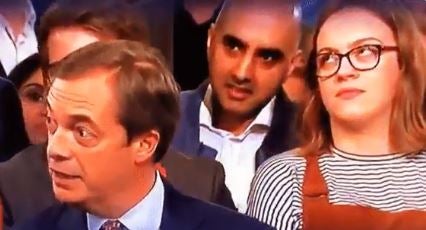 For one student in the United Kingdom, eye-rolling came in the place of what words could not express.

The 21-year-old student, Harriet Ellis of the University of Birmingham, was found rolling her eyes at U.K. Independence Party member Nigel Farage during a live television debate on Channel 4 last Nov. 5. The debate, titled “What The Nation Really Thinks” concerned Brexit, as per Time on Nov. 6.

The epic eye roll was punctuated by her obviously taking a deep breath then shaking her head.

Farage represented Leave Means Leave, the leading cross-party campaign for a clean, swift exit from the European Union. In a major poll conducted by Channel 4 and Survation from October to Nov. 2, it was discovered that 105 council areas that voted Leave in 2016 would now vote Remain.

As per the report, Farage was mid-speech about “Remainers Brexit” in regard to the poll’s result when Ellis made the poisonous eye roll.

GIFs of Ellis’ eye roll has since made the rounds on Twitter, seemingly echoing the sentiments of thousands of netizens. Hannah Jane Parkinson, a journalist from The Guardian, tweeted Ellis’ eye roll on her Twitter account last Nov. 6 where she praised the young woman.

“There’s been a lot of competition this year,” wrote Parkinson. “But this has to be the greatest eye-roll of 2018.”

There’s been a lot of competition this year, but this has to be the greatest eye-roll of 2018. pic.twitter.com/bB2stJh1Ku

Meanwhile Ian Dunt, editor of Politics.co.uk and author of the book “Brexit:
What The Hell Happens Now?”, shared that he loves how Ellis’ eye-roll followed the three-act structure of narrative fiction.

“I love that this eye roll follows the three-act structure,” he quipped.

The three-act structure model divides a story into three parts or acts: the setup, confrontation and resolution.

I love that this eye roll follows the three-act structure https://t.co/CPiFpZuUls

Ellis, on her end, stepped forward on Twitter last Nov. 5 to confirm that she is indeed the girl in the clip: “Thanks for all the kind words, this is indeed me!”

Thanks for all the kind words, this is indeed me! pic.twitter.com/FsEfKo8LyF

And, as if daunted by her newfound fame, she tweeted on the same day, “Guys please don’t follow me I have nothing good to say.” Cody Cepeda/JB

Guys please don't follow me I have nothing good to say

Eye-rolling was a ‘survival tactic’ among women, evolutionary psychologists suggest