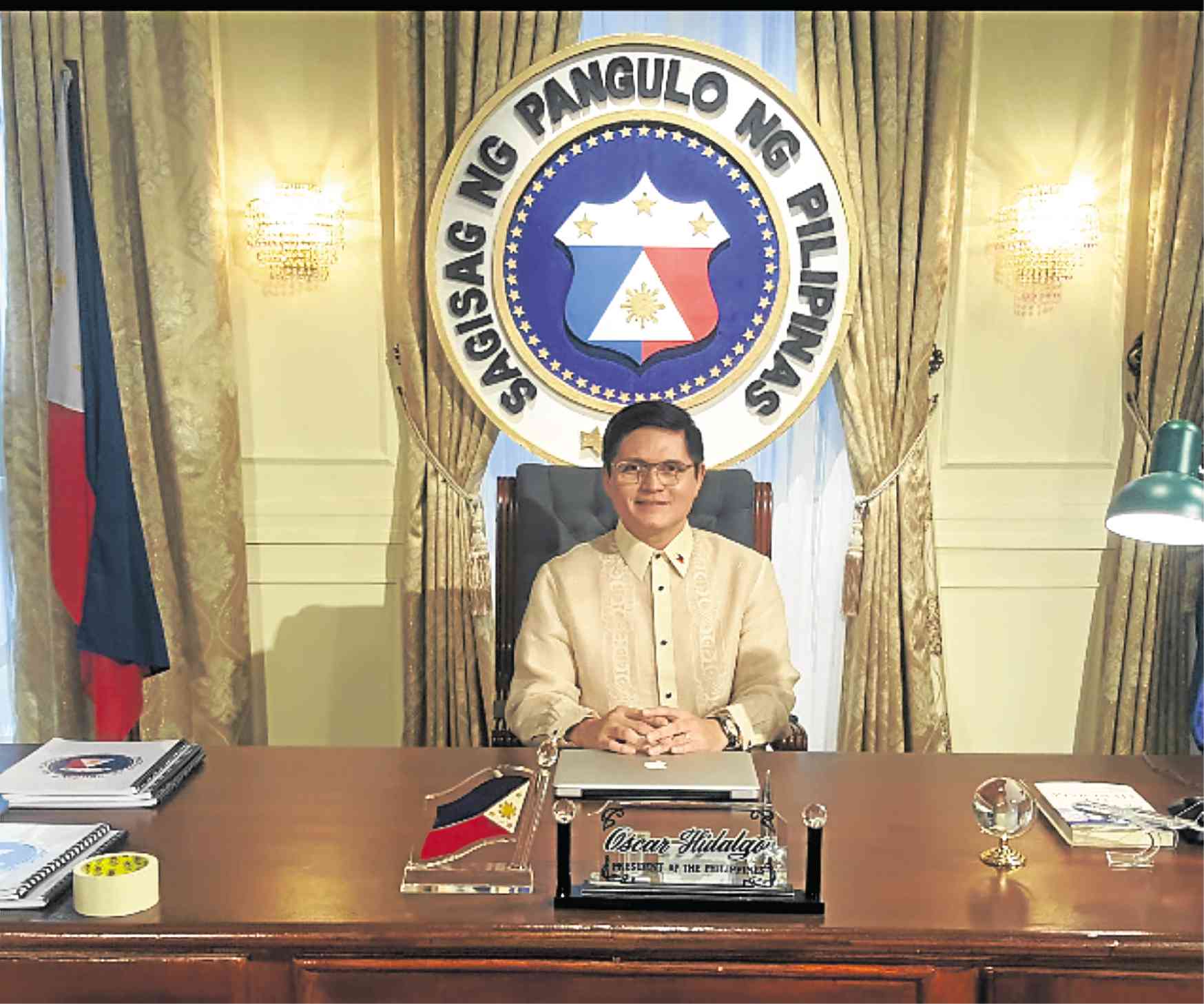 Joining the cast of ‘Probinsyano’ came at the right time, Rowell Santiago says, ‘because I wanted to go out of the box, out of my comfort zone.’ PHOTO COURTESY OF SANTIAGO

Rowell Santiago laughs after recounting a recent incident at Milky Way Café, a short walk from the Swatch & Swatch building in Makati where he spends time as creative director. Joining a group of friends who were having lunch, he ordered ginumis, a shaved ice dessert similar to halo-halo.

After everyone had finished eating, he thought his order had been paid for by his friends. As the group was leaving, a waiter ran after him and said, “Mr. President, hindi niyo pa ho nababayaran ’yung ginumis.”

And on the morning of the interview, at 7 a.m., while having breakfast at McDonald’s, he recalls, a mother with her toddler approached him, and the child uttered, “Si Presidente.”

For the past eight months, Rowell has been playing the role of Oscar Hidalgo, the President in the long-running ABS-CBN action-drama TV series, “FPJ’s Ang Probinsyano,” currently the No. 1 teleserye in the country.

Rowell finds it amazing that people on the street recognize him and call him “Mr. President.”

He attributes this to the power of TV as mass medium. It seems the whole country is watching “Probinsyano”—not just the country, but also Filipinos based abroad who are connected to The Filipino Channel (TFC).

“OFWs look forward to watching it every day,” Rowell says. “It’s like how they survive the loneliness of working far away from their families. It serves as their lifeline. The masses regard Cardo (the series’ lead character played by Coco Martin) as a hero.”

Rowell comes from a show-biz family—the Santiagos were behind the film institutions in the country, Premiere Productions and Larry Santiago Productions, and his father, Pablo, was a director, his brothers, Randy and Raymart, are actors.
However, he hasn’t been acting for sometime. He’s known more as director of TV commercials, concerts (e.g. Sharon Cuneta, Matteo Guidicelli) and corporate events.

“As an actor, nothing seems to excite me,” he muses, even as he has appeared in three recent movies.

Joining the cast of “Probinsyano” came at the right time, he says, “because I wanted to go out of the box, out of my comfort zone. It’s the No. 1 show. I took the challenge.”

He had played the role of a President in another ABS-CBN teleserye, “Tanging Yaman,” but he says that’s different from the thrilling, action-packed “Probinsyano.”

The role of President was first offered to Rowell in 2017 for “Ang Probinsyano Book 2,” but the script changed and the character was scratched.

Early this year, the show’s producers again made an offer, and taping was to start in March.

“I got interested because it had a complete (presidential) cast,” he points out. “Dawn Zulueta would play First Lady, there’s a VP (Edu Manzano)… and their respective families.”

Rowell says his character is “approachable, kind, honest, family-oriented, makatao, straightforward, an ideal President, but completely the opposite of the Vice President’s bad-guy character.”

He actually finds it more interesting to play a bad guy: “In ‘Probinsyano,’ the villains stand out.”

But he also realizes that portraying President Hidalgo could be a game-changer in his career, and for that, he gives credit to Coco Martin, who is also the director in Rowell’s scenes.

He smiles upon being reminded that he was the director when Coco was starting out as an actor.

In recent episodes, Hildalgo finds himself down and out. “Nakita ng tao ang Presidente bumaba nang husto sa lupa,” Rowell says. “People embraced me as the character, more than being Rowell Santiago.”

Working with Coco has led Rowell to discover something different: “Coco is very organic. There is no script (for Rowell’s scenes). He just signals who among the characters in the scene will deliver improvised lines, which will have to be memorized in a few minutes before the cameras roll.

But Rowell adds that there’s a sequence guide and Coco explains the scenes he wants to shoot and what will happen in the scene.

He has to be on his toes, and he likes the method because it allows the actors to have inputs and suggestions.

“We’re not referring to a particular President or administration, but the issues mentioned in the show are really longtime problems that have hounded the country.”

Looking back on his life, Rowell admits that growing up around movie sets has made him indifferent to fame. His father, filmmaker Pablo Santiago, and mother, former actress Cielito Legaspi, raised him well.

In high school at La Salle Green Hills, Rowell was the leader of group reports. Back then, he was already creative, “may influence na ng tatay ko.”

But he chose to study marketing management in college at De La Salle University (DLSU) because he wanted to do something different.

Yet he still found himself in show biz. Joey Reyes, his professor then at DLSU, was writing scripts for live shows and he would ask Rowell: “Hindi ko gagawin ito kung hindi ikaw ang magdi-direct.”

The second of six siblings, Rowell says he keeps in touch with the family through an online chat group. “Sometimes I go to Randy’s house. The family gathers during the Christmas holidays.”

Being in the limelight, he says, entails responsibility: “I have to dress and act properly in public.”

For fitness, he used to go to the gym, but got bored with pumping iron. Seven years ago he got into yoga: “I do Bikram and Vinyasa. I need to tone my body and yoga helps a lot. It relieves me of stress, by knowing the right way to breathe. You can do yoga alone, you just need a small space.”

He says that being in “Probinsyano” has given him a second wind, and that he considers everything as a matter of luck and timing: “It’s great that I’m something I consider relevant.”

Life, to him, is “right timing”—just like playing the President.