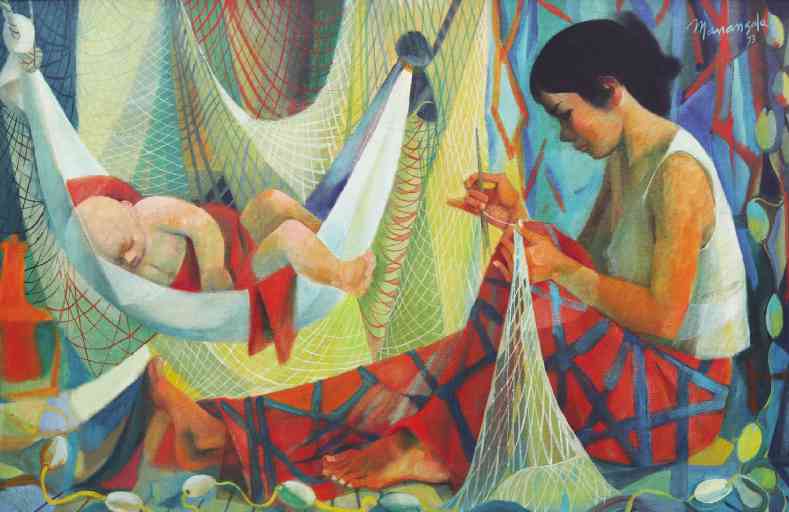 Dec. 8 is the feast of the Immaculate Conception, so León Gallery will pay tribute to the Madonna and Child, one of the favorite genres of Philippine master artists, in its forthcoming Kingly Treasures Auction 2018 on Dec. 1.

Botong’s immortal “Madonna of the Bamboos” is reincarnated in a bas-relief transformed into a towering door. In his original 1962 masterpiece, Botong (1912-1969) took the Catholic image of Madonna and Child and synthesized it with the Filipino bamboo. The painting featured bamboo in various stages of growth, an homage to the Baby Jesus as well as the eternity of His love. A butterfly, as in the first artwork, flits near the sacred pair, another allusion to the endlessness of life with Christ.

The Poet of Angono would adopt the bamboo as a metaphor for the Filipino spirit. It would grace the humblest of abodes, in the form of floors, benches and roofs; it would be the strong palisade of Soliman, King of Manila, and the thoughtful cane Rizal would carry in his hand. It would also make the sharp staves of Bonifacio’s army. The bamboo would shelter families cooking Angono’s famous sinigang, as well as the many townfolk in his famous murals, carried in hammocks, busy at bubbling pots or lazing away an afternoon in a treetop.

Manansala’s (1910-1981) “Mending Nets”—shows the mother and child in a graceful web of fishing nets—is another fascinating depiction of the Madonna. The Christian Lord is “a fisher of men,” a metaphor borrowed from his disciples who were all fishermen after He performed a miraculous catch of fish. In this work, the nets crisscross the work, catching the sleeping baby and its dreams and weaving its way through the mother’s brightly-colored skirt.

BenCab presents several mysterious mother-figures from a terno-clad female from his very first “Larawan” show at the Luz Gallery in 1972. The “Larawan” series was based on a treasure trove of Filipino photographs from the turn of the century discovered by the artist while he lived in London. Other figures include a rendering of the original “Sabel,” a nomadic figure from the Manila inner city.

Meanwhile, brilliant colorist Mauro “Malang” Santos (1928-2017) is featured in a superb work of the Virgin in a carroza or formal carriage to carry the sacred images as part of the festivities of a Filipino town fiesta. Angels, rich brocades, lighted candles and fresh flowers collide in this richly sublime painting. —CONTRIBUTED