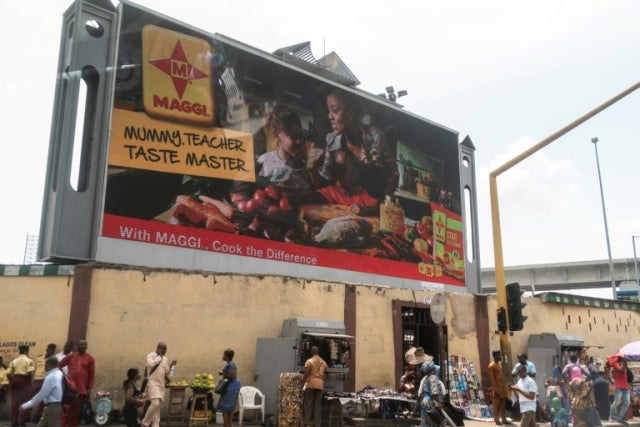 The seasoning brand Maggi sells over 90 million stock cubes in Nigeria each day, according to company figures. Image: AFP

Adverts in Nigeria depicting career women gleefully juggling their job with kitchen duties have sparked a heated debate about gender roles in the fast-changing society of West Africa’s largest economy.

The campaign is for the seasoning brand Maggi, which sells over 90 million stock cubes in Nigeria each day, according to company figures.

In a video ad, a 30-something mother and self-described “boss lady” proudly introduces herself as a “chief quality inspector” in her corporate life and a “kitchen grandmaster” at home.

She switches between presentations in the boardroom to cooking in an ultra-modern kitchen.

With an apron over her office clothes, she blows out the flame from a gas lighter — rather like James Bond dissipating the smoke from his gun — as she whips up a dish for her loving family.

A billboard ad, meanwhile, features a beaming woman with her two children, with the caption: “Mummy. Teacher. Taste Master.”

The ad campaign, released last month, has divided opinion in a country where women are often expected to conform to established gender roles at a time of radical changes in lifestyle.

Many social media commentators were excited by what they saw as a “modern” portrayal of women in a position of power, balancing multiple roles with ease.

One Twitter user said of the video: “I like the fact that she is a mom, boss lady and still a slayer.”

Another said: “I love that a woman is being portrayed as the multi-tasker that she is.”

But others described the advert as “misogyny” and “well-packaged suffering” and questioned why the person in the kitchen was not a man.

Nestle, which owns the Maggi brand, was surprised by the controversy, stating that the advert was intended to celebrate women in a country where most cook more regularly than their partners despite working too.

Victoria Uwadoka, the company’s corporate communications manager, said it welcomed the debate the campaign had generated.

“Today, the reality is that most women are juggling professional life and family responsibilities,” she said, adding that Nigerian society was evolving.

“We believe cooking should be open to everyone.”

Gendered roles in food adverts are a controversial issue around the world.

Traditionally, Nigerian women are expected to be the main caregivers, looking after the home and children.

But the younger generation is challenging that idea in the country’s rapidly urbanizing cities.

Jolaoluwa Ayeye is a 26-year-old writer in Lagos and co-host of popular podcast “I Said What I Said”, which embodies the voice of a young generation of Nigerian women.

“I think the Maggi advert reflects current Nigerian norms but at the same time reinforces stereotypes that Nigerian women are trying to reject,” she said.

“It is uncomfortable and difficult to work from sun-up to sundown doing work that should and could be done with proper delegation and sharing of domestic workloads.

According to the World Bank, 51 percent of Nigeria’s population of more than 180 million lives in the countryside, where traditional, conservative ideals are more prominent.

With the remainder in growing urban centers, the ad campaign has highlighted a wider debate between modernists and traditionalists.

Best-selling Nigerian novelist Chimamanda Ngozi Adichie in June told US news satire program “The Daily Show” she was happy for people to hold the door for her.

But the author of “Half of a Yellow Sun” and “We Should All Be Feminists” said she hoped “they’re not doing it for this idea of chivalry,” as it implied women were weaker than men.

Her comments sparked a debate online and within Nigeria, with many celebrities such as the popular singer Banky W criticizing her politics as “going too far.”

Politician Rinsola Abiola, who is standing for parliament in elections in February, said depictions of women like that in the TV advert were unrealistic, especially to younger people.

“I acknowledge that it resonates with a lot of women who live that way. I have an elder sister just like that woman but I’m exactly the opposite of that advert,” she said.

“For me the purpose of an advert is not just to present social norms but advocate for better structures.”

The advert comes after concern that just 31 women in the two main political parties were running for 469 seats in parliament.

Those norms were epitomized by President Muhammadu Buhari when he dismissed his wife Aisha’s view on domestic politics.

He told a joint news conference with German Chancellor Angela Merkel in 2016 that the First Lady belonged “in my kitchen and my living room and the other room.” CC

In this seven-day boot camp in China, kids are being taught how to act like a ‘real man’

How Asia Kate Dillon is dismantling gender roles in Hollywood