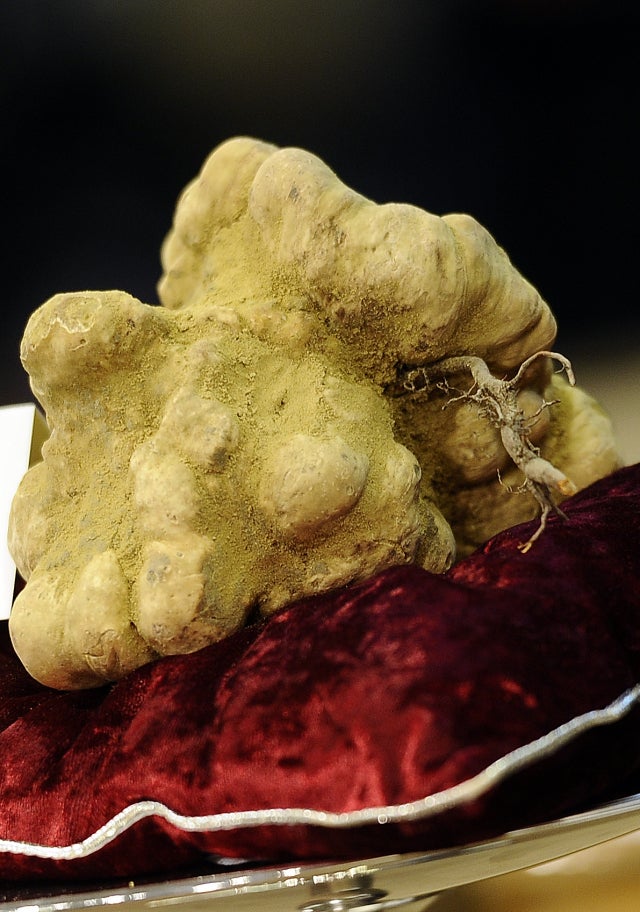 An official displays a while truffle. Image: AFP/Filippo Monteforte

A rare 850 gram white truffle was auctioned for 85,000 euros ($96,000) in the Italian region of Alba on Sunday, with the anonymous Hong Kong buyer paying nearly 30 times this year’s market price for smaller nuggets.

The annual auction held in the region near Turin saw the unusually large white truffle sold at a price that would value it at 100 euros per gram.

“The price of this exceptional truffle does not correspond to the market price, which this year is around 350 euros for 100 grams,” the event’s spokeswoman told AFP.

“What explains this high bid is the fact that the sale is for charity and also the rarity of a 850 gram truffle, because the bigger the truffle the more valuable it is.”

The white truffles of the Alba region are highly sought after and are unearthed between September 21 and January 31.

This year’s harvest was excellent, both in terms of quantity and quality, after a difficult season last year.

The bumper harvest has brought the regular market price down — to the applause of restaurateurs and gourmets.

“Last year, because of the drought that drove a weak harvest, we got to 600 to 700 euros for 100 grams. This year we went to 250 euros and now it is around 350 euros,” for nuggets weighing an average of 20 grams, said Antonio Degiacomi, head of Italy’s National Center for Truffle Studies.

Degiacomi said rains and storms in July and August this year had provided ample water, which is perfect for the truffles.

“It is characterized by an intense perfume, which conjures romantic encounters, the forests, nature. It is very evocative,” said Degiacomi.

Alba has hosted truffle auctions for 88 years as part of its annual truffle fair, which goes on for around two months.

This year’s event was held in conjunction with Hong Kong, where the buyer was located. CC