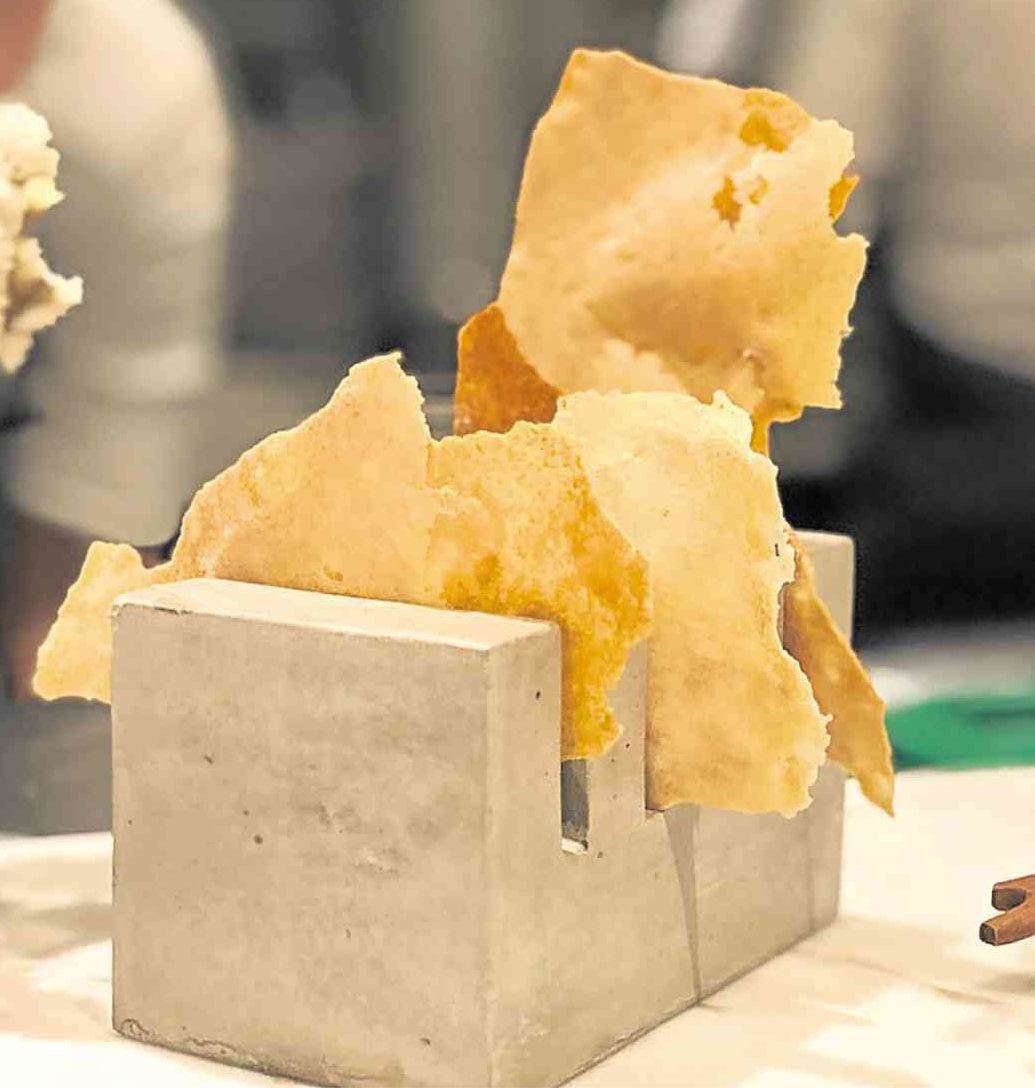 The dining room at Helm is behind a discreet sliding door beside the staircase leading to Savage, Josh Boutwood’s casual, woodfire-centric dining establishment, where diners dive into large slabs of meat or grilled tuna jaw.

The décor at Helm is muted, and the atmosphere one of sophisticated refinement.

Boutwood has taken the dining-in-the-kitchen concept of The Test Kitchen one step further. Helm has 10 seats arranged around an open kitchen where three to five staff work extremely quietly.

Theatrical, chef-centered dining experiences are nothing new. Most famously, L’Atelier de Joël Robuchon used it to emphasize the “atelier” aspect of his new brand of casual restaurants.

Closer to home, Good Ah! (Open 25 Hours) uses it for convenience. Bruce Ricketts’ Mecha Uma uses it, although it has chairs and tables along the perimeter wall of the restaurant in case you’re feeling antisocial.

Japanese sushi restaurants, which are centered around the skill of an individual and the communication between the diner and the chef, use this layout as well.

The cult of open kitchens, whether or not they are beside the dining area like at Toyo Eatery, is relatively new. It comes, among other things, from a more egalitarian view of the relationship between diners and those preparing their food.

People were also more interested in what went on in the kitchen; and with the rise of the televised celebrity chef—there have always been celebrity chefs, but they were somewhat distant and remote figures —diners wanted to ask questions, chat with the chef, and generally see the magic of creation taking place.

This isn’t easy for cooks. Try and find your way into the kitchen of a Chinese restaurant, and you’ll quickly find out how territorial chefs are about their space. Not only allowing, but inviting your guests to watch you cook is telling you, the diner, that they have nothing to hide, and that they have absolute confidence in their ability to pull this off like a carefully choreographed dance. If you’re serving only one thing, like sushi, it’s difficult enough, but with the complexity of Boutwood’s fare it’s even more difficult.

Boutwood’s fare is very complicated: The new menu feels like it’s taken the intricate, involved nature of the dishes at The Test Kitchen and turned everything up a notch. I have a copy of the menu, but what we actually ate seems to have riffed on, or even departed from, what was on the menu, much like a Duterte press conference.

The printed menu is deceptively short (it’s also printed in mouse-type font), but we had an extravaganza of three meat courses and three dessert courses—in addition to copious starters and a full bread course.

Everything was wonderful. I would have wanted to go into the menu in detail, but he’s changing it next week, so there’s no point. But I have no doubt that the new menu will also bear signature Boutwood touches, like using echoes of the same flavor in another form—granulated and sprinkled atop, say, distanced from the dominant note of the dish by time (fermented, dried, pickled). It will be delicious but challenging.

For one of his palate cleansers, Boutwood uses kamias (bilimbi) that he knows will leave your mouth “feeling dry” (or as we know it, pakla, from the tannic nature of the fruit) and will rescue you with a second palate cleanser to cleanse the first.

I have to mention a dish that is probably one of the least photogenic I’ve ever been served —it looks like a hairball from a sea-creature—but turned out to be one of the most divine oyster dishes I’ve had.

While dining in this radial manner gives you an amphitheater view of the cooks putting your meal together, it also affords Boutwood a Bentham-esque panoptic view of the diners.

He noticed, for instance, that the broth laid out on two conch shells remained untouched and had turned cold because we were engrossed in conversation; it was quietly taken away and replaced.

With this restaurant, Boutwood’s venture joins the ranks of restaurants that not just operate on a level that’s good enough for people to fly in for, but can represent the homegrown palate and creativity.

The chef is not unaware of this: There’s greater attempt to use local ingredients, for example, and incorporate local flavors—though it obviously isn’t Filipino food. This lack of a back story may be what’s keeping Helm from being packed every night, as it should be: It’s hard to pin down, put a peg on, or describe in a sentence.

Even Mecha Uma is easier to describe—although “Japanese with a twist,” which is usually what people say, sells the place short. But it gives people something to latch on to.

But this is a marketing problem, not a food reviewer’s problem. I’m confident that Helm will eventually find a place in the dining public’s consciousness as a go-to restaurant for sophisticated yet satisfying food.

In the meantime, take advantage of the fact that it isn’t crawling with lifestyle bloggers and tastemakers and influencers yet, and make a reservation as soon as you can.  –CONTRIBUTED