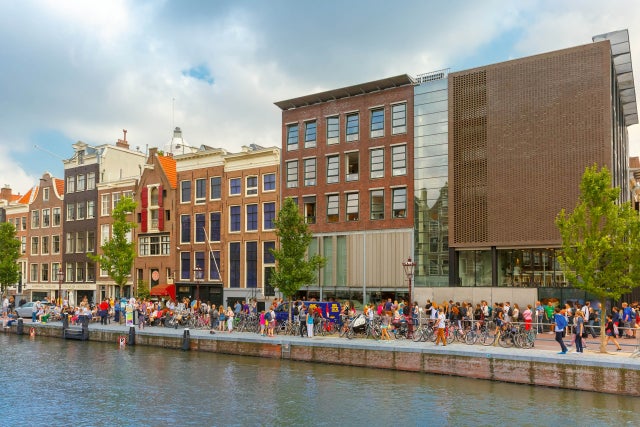 Amsterdam, Netherlands - Jule 29, 2014: Tourists queue at the Anne Frank House - the 3rd most visited museum in the Netherlands, after the Rijksmuseum and Van Gogh Museum. Image: Shutterstock/kavalenkava via AFP

Teenage diarist Anne Frank has long been a symbol of humanity amidst the horrors of the Holocaust, but the house where she hid from the Nazis is now trying to teach a “new generation” about anti-Semitism.

After two years of work, the museum in Amsterdam unveiled a fresh look on Thursday to make it more relevant to young people who may lack knowledge about World War II, in an era when hate crimes are soaring.

Dutch King Willem Alexander was the guest of honor as the museum, built around a secret annex in the canalside house where the Franks hid from 1942 to 1944, showed off its “renewed” appearance.

“Every year 1.2 million people visit the Anne Frank House and half of those visitors are under the age of 30, so we have a very young audience,” museum executive director Roland Leopold told AFP.

“Interest in the war and the story of Anne Frank is rather increasing than decreasing, but the knowledge is about it is definitely less… We need to provide more context and background to the story of Anne.”

Frank’s famous diary vividly portrayed the life of an ordinary girl living in extraordinary circumstances — hiding from the Nazis as they attempted to exterminate the Jews of Europe.

The museum shows the cramped rooms, accessed through a door concealed behind a fake bookcase, where she lived with her father Otto, mother Edith, sister Margot and four other people.

Betrayed and arrested by the Gestapo, they were deported from the Netherlands and Anne, 15, and Margot, 19, died of typhus in Bergen-Belsen death camp in February 1945 while their mother died at Auschwitz.

Otto Frank survived and made it his life’s work to publish his daughter’s diary and turn the house into a museum to remind the world about the Holocaust.

For the past two years the museum has remained open while the renovation work has gone on, in what managing director Garance Reus-Deelder called an “immense challenge.”

The improvements include audio guides with more historical context, as well as exhibits that show more about the slow march of hate from 1933, when the Franks moved from Frankfurt to Amsterdam.

There is also a new entrance to deal with huge queues of visitors that often stretch along the canal.

“We really want to encourage the new generation to visit the Anne Frank House,” she said.

Additions also include a letter from the principal of Margot’s school in which she tells the Nazi authorities that “I have the honor to present you the list of names of children of Jewish blood.”

The core of the museum remains focused on the Franks’ life, from the steep stairs and poky rooms, to the poignant sight of the posters of movie stars that Anne glued to the wall in a desperate bid to make their hiding place more cheerful.

The rooms have also been kept as empty as possible — in line with Otto Frank’s wishes — to show the loss of the lives of those in the house and the 60,000 Amsterdam Jews who did not survive the war.

The message remains more relevant than ever as hate crimes and anti-Semitism is on the rise around the world, the officials at the Anne Frank House said.

The US last month suffered the deadliest anti-Semitic attack in its history when 11 people were gunned down at a synagogue in Pittsburgh, while hate crimes surged 17 percent in Donald Trump’s first year as president.

France said anti-Semitic acts had risen 69 percent in 2018 while Britain has also seen an increase in hate crimes since the 2016 Brexit referendum.

“Anne Frank was born in a democracy in 1929, and she died 15 years later in one of the greatest atrocities that the world has ever known, and this is as quickly as things can change,” Reus-Deelder said.

“That is one of the lessons that we would hope young people take away from this museum: what is their role, to make sure that this never happens again and our society remains as free and democratic as it is now.” CC

Anne Frank’s family tried to escape to US, hit roadblocks