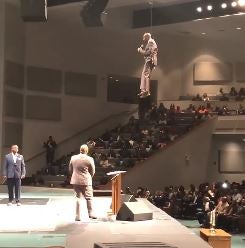 Floating pastor demonstrates how Jesus Christ would return to earth

One pastor in Southaven, Mississippi, United States took “show, don’t tell” to a whole new level when he demonstrated to churchgoers last Nov. 25, a Sunday, how people would supposedly see Jesus Christ in his Second Coming.

The video of Pastor Orr was posted on Facebook on the same day by a certain ZaKnedria LeUnshae Webb. It showed the pastor hoisted up in the air while churchgoers watched on.

“I says when that day is going to come, when the sky gets cracked and Jesus Christ comes again and every eye will see him when he come again,” Orr can be heard saying as he hovered in the air. “So here’s our question for you this morning, brothers and sisters… are you ready? Are you ready for his return? Amen, amen.”

Laughter ensued as Orr dangled from the ceiling before eventually being lowered to the ground where he took the podium.

“Are you ready for his return? Brothers and sisters, are you ready today for the return of the Lord Jesus Christ? Because he’s known his way back…”

Webb’s video racked up thousands and thousands of views and likes since the time of posting, though the reactions that came after were mixed.

“So that’s where the tithes go,” wrote one Michael Carter. “Got it.”

“Damn y’all helped him pay for that huh… this is why people don’t go to church,” wrote a certain Kelcie Roland.

One netizen also questioned why the pastor had to do such, when he’s not God. “Why would he do that he’s not God?” said one Cleotha Saddler. “God is the only man to fly out of the sky!!! That’s not cute to me.”

Webb, on her end, has since clarified in her post that Pastor Orr did not say he was God nor Jesus.

“My pastor is the best pastor hands down…” said Webb. “Pastor Orr did not say he was God nor Jesus. If y’all listen to him and got the word, he was simply demonstrating how when Jesus returns every eye will see him.” JB