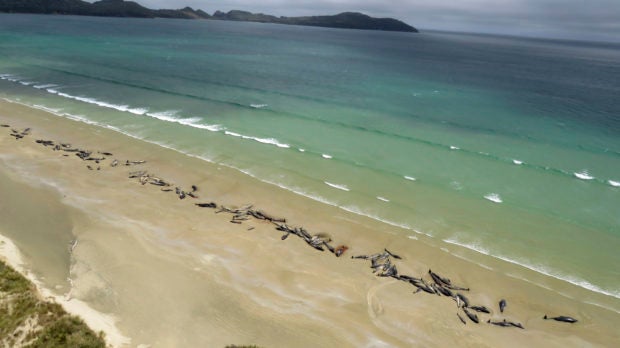 In this Sunday, Nov. 25, 2018 photo, pilot whales lie beached at Mason Bay, Rakiura on Stewart Island, New Zealand. As many as 145 pilot whales have died after the mass stranding which was discovered by a hiker on Saturday, Nov. 24, 2018.(Department of Conservation via AP)

Hiker recalls heartbreak in trying to save beached whales

While over 100 whales thrashed about at a New Zealand beach, people in the area could only watch, knowing that they could not provide rescue efforts for the creatures that grow to be at least 5 meters (16 feet).

Liz Carlson, a travel blogger, was on a five-day hike on the west coast of Stewart Island or Rakura on Saturday, Nov. 24, when she and fellow hikers encountered the stranded whales.

She described the experience as “the worst night of my entire life.” Carlson shared photos of the whales on the shore, some already in the sand struggling to move, via an Instagram post on Tuesday, Nov. 27.

“I’ll never be the same after this,” she said of her brush with dying whales.

It was sunset when she and other travelers came across the 145 whales stranded in the low tide. “When we realized the horror of what we were seeing, we dropped everything and ran straight into the water,” she said.

“Desperately we grabbed their tails and pushed and yelled, before we got hammered by them thrashing around,” she said. “It was useless — they were so big and heavy and the realization we could do nothing to save them was the worst feeling I’ve ever experienced.”

“We were in a place with no people, no service, no help,” she lamented. She noted that the whales needed about 1,000 individuals so that they could be saved. Stewart Island only has 375 residents, reported the Associated Press on Monday, Nov. 26.

While one of the travelers, Julian Ripoll, went to a base hut 15 kilometers away so he could radio for help, Carlson and the rest of the group were left to do nothing else but watch the whales.

“I stayed with the whales ’til dark, sitting with them, dragging the smallest baby back in the water every few minutes before it would rebeach itself, and throwing water over the drier whales until my hands were numb from the water and wind,” she said.

“I’ll never forget their cries, the way they watched me as I sat with them in the water, how they desperately tried to swim but their weight only dug them deeper into the sands. My heart completely broke,” she wrote.

Soon, high tide would come and she knew the whales would stand no chance, especially because they were in a remote part of New Zealand.

“I sank to my knees in the sand screaming in frustration and crying, with the sound of dozens of dying whales behind me, utterly alone,” she said.

The group was able to contact the Department of Conservation (DOC) rangers, who found 75 whales dead and had to euthanize the rest.

“My heart hurts for the man who had that horrific job, and would have done anything to save them too,” Carlson said. “Otherwise it would have likely been days before anyone even knew the whales were there and a very long painful slow death for them all.”

“Some small part of me died on that beach with those 145 whales, the last of my childhood innocence, that I didn’t know I still had, is gone,” she said in a post today, Nov. 29.

The whales were in poor health, said Ren Leppens, the Rakiura DOC operations manager in an Associated Press report. It is estimated that they were already on the beach for a day before they were found.

There is no known reason for why the whales were stranded. Factors could include an illness, escaping predators or a navigational error. JB