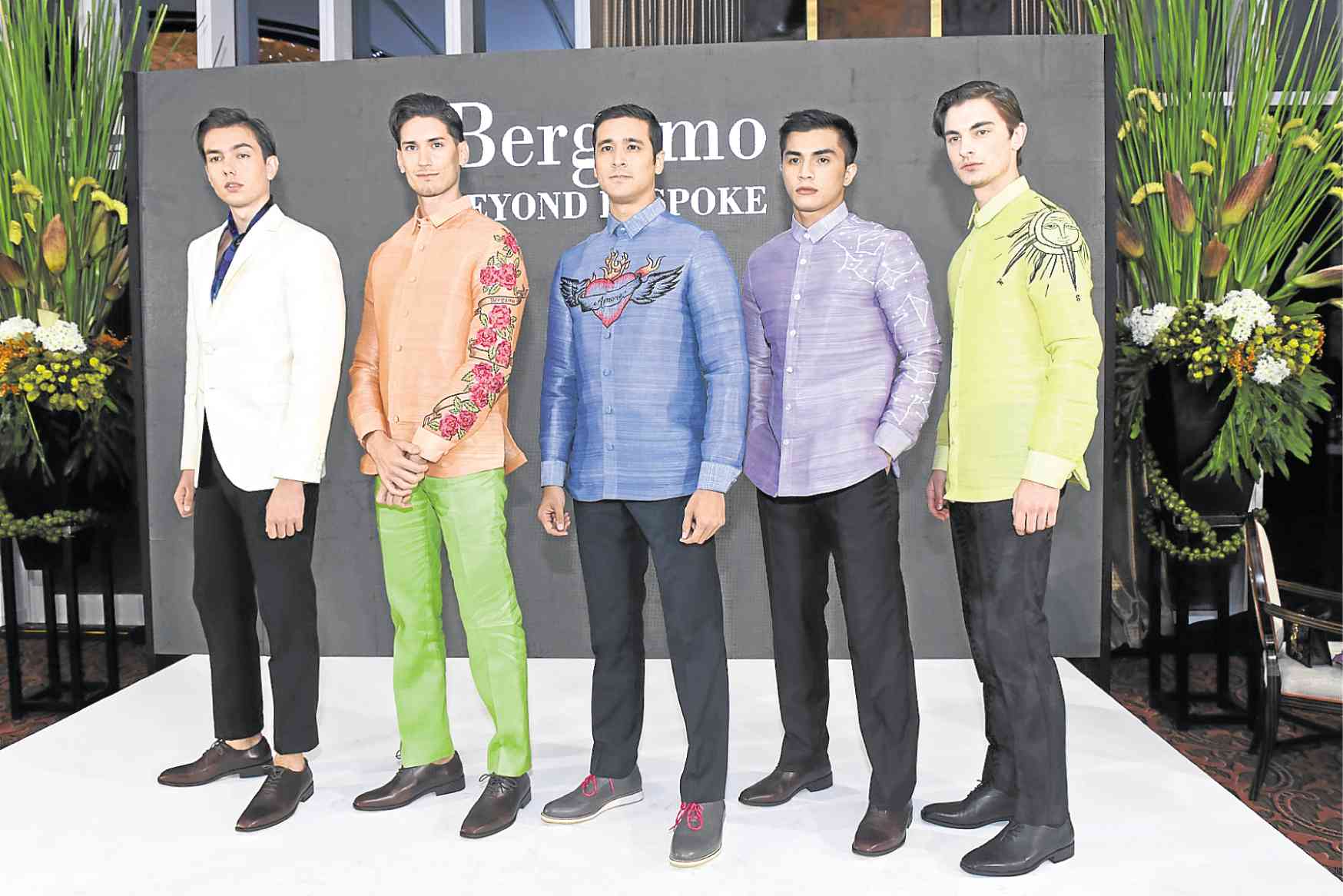 mo by James Reyes: citrus-colored barong tagalog with tattoo embroidery. The collection uses “pinukpok” fabric, the abacaweave made in the Bicol region.

Some of the suits were in zesty shades of lime, tangerine and lemon. Even the barong tagalog pieces were in a similar vibrant palette and sported tattoo embroideries on the sleeves, shoulders, and back, or across the chest.

Some of the young men wore bright-colored shorts paired with guayabera shirts or printed short-sleeved casual button-downs, like well-dressed holiday revelers in a fancy resort town.

Mel Meer, founder and chief executive of upscale tailoring brand Bergamo, had to give a lighthearted caveat before the recent dinner show—those looks were just for the show, so it shouldn’t scare his core clientele.

Held for an intimate group of 80 at Finestra at Solaire, the event celebrated Bergamo’s 32 years.

Reyes came on board only two weeks before the Oct. 29 event, although he and Meer have known each other for some time.

It was kismet: Reyes, who was an award-winning ad agency creative director, moonlights as theater costume designer and has his own atelier, has always wanted to design men’s wear.

Since there was barely time before the show, Reyes quickly decided on a theme, Italian Riviera, to tie it up with the chosen venue, an Italian restaurant. He was amazed at how quickly—and how skilled—Bergamo’s team of tailors worked given the short lead time.

The embroidery on the barong was Meer’s idea, says Reyes, which the designer took a step further by imagining the tattoos on the fishermen on the Italian coasts, thus the themes—bird’s wings, roses, and Sacred Heart with the word “amore,” Italian for love.

Reyes is best known for architectural shapes on women’s wear. From the University of the Philippines College of Fine Arts, he’s been known to add a little twist or clever detail to his garments. Designing bespoke men’s garments, he’s finding out, suits his temperament.

Unlike women’s wear, “men’s wear is very limited—it’s just shirts or suits or barong, so I like to put little details, say, on a white shirt,” he said.

“I’ve always wanted to do men’s wear but it’s hard to find a tailor who will work exclusively for you.” At Bergamo, he has a coterie of them.

He made pieces outside of safe, neutral colors for men who are willing to step out of their comfort zone, he said.

The show also had classic pieces—dark-colored suits and traditional embroidered barong. There were also suits in dark jacquard, as well as a white tuxedo, for evening formals.

Dennis Lustico, himself a former creative director of Bergamo, helped out with a few tailored pieces for women. Bergamo gets the occasional female client asking for well-made suits and other corporate wear.

Reyes worked largely on pinukpok for the formal wear in his debut collection. Pinukpok is the abaca fabric made in the Bicol region. Meer has made it his advocacy to support the women weavers of Legazpi City, after seeing their work on a visit.

Meer is raising money for the purchase of more sewing machines for the weavers, and is helping the local government build a larger workplace for the women so they can meet the increased demand for the fabric.

“Pinukpok is very workable because they also mix the weave with silk or cotton,” said Reyes.

It was a challenge for the tailors to use it on suits, since they were used to fine Italian fabrics, but he and Meer were happy with the results.

“What I like about pinukpok is the outcome after dyeing,” said the designer. “It’s different from piña or jusi. It looks special. It’s quite good for barong since it doesn’t crease and is perfect for our weather. It’s also a sturdy material.”

“There’s so much RTW out there, it’s different when something is made just for you,” said Meer, who has seven branches of Bergamo. “Filipinos want to dress right. Fit is very important, and bespoke service is what we excel at.”

They’re getting their share of younger clients, thus the welcome addition of Reyes’ brand of cool, said Meer. But his core market remains the over-40 demographic with considerable income.

He and Meer haven’t quite ironed out the details of their partnership, but Reyes said there could be some women’s wear, as well as some off-the-rack pieces, in the future for Bergamo.