A bit of ‘Kagatan,’ a fair for vinyl record aficionados | Inquirer Lifestyle 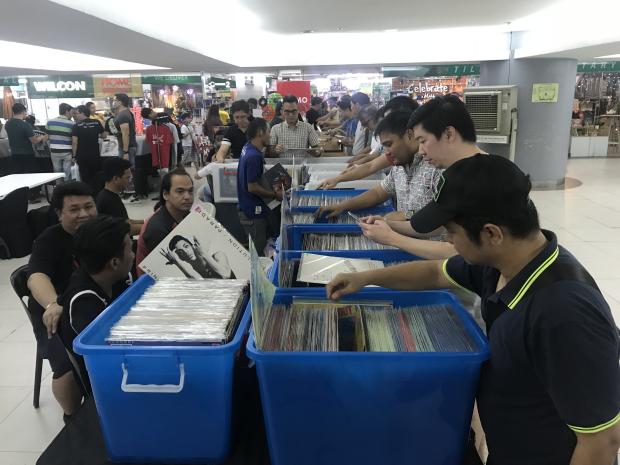 A bit of ‘Kagatan,’ a fair for vinyl record aficionados

It’s already 2018, but it seems like vinyl records are still popular.

Arbie Won, organizer of the event, said he had been organizing the gathering for almost seven years.

According to him, the “Kagatan” title of the event was lifted from a song of Juan De La Cruz Band.

“It’s part of a classic Juan Dela Cruz song, Pinoy rock. Medyo slang siya for unahan, parang may friendly competition kasi among the collectors eh,” he said in an interview.

According to Won, “Kagatan” is now on its 29 installment since it started back in 2011.

Before organizing of music fairs, he was already a collector of vinyl records.

He started to collecting them when he was about 17 years old. His collection then grew to 2,500 vinyl records.

According to him, collecting records gave him a “sense of discovery.”

Another vinyl records fan is Eunice Trinidad, 34, who has just started collecting them. Currently she has around 20 records but is looking forward to getting some more.

It was her grandfather, owner of a 1970s turntable, who got her interested in vinyl records.

According to Trinidad, said that her family still uses her grandfather’s turntable once in a while.

Collecting records, she said, also gave her an opportunity to preserve old music.

Another collector, who gave his name only as Willie, was also influenced by his grandfather into liking vinyl discs. His grandfather also had a turntable at home.

It was only five years ago when Willie, 58, started collecting, but he has since lost track of exactly how many records he already has.

He would normally limit his spending on a record to only P5,000. But there was an album by the band Asin that cost him a lot.

It could be the physical aspect of holding a disc that attracts music lovers, Won said. The rewarding experience that one would really exert an effort before it could listen to a music.

Despite the different age brackets of the three, Won, Trinidad, and Wille all feel a sense of fulfilment when they buy a vinyl record.

According to Won, as long as the public listens to music, vinyl records would never lost its limelight to the music industry.