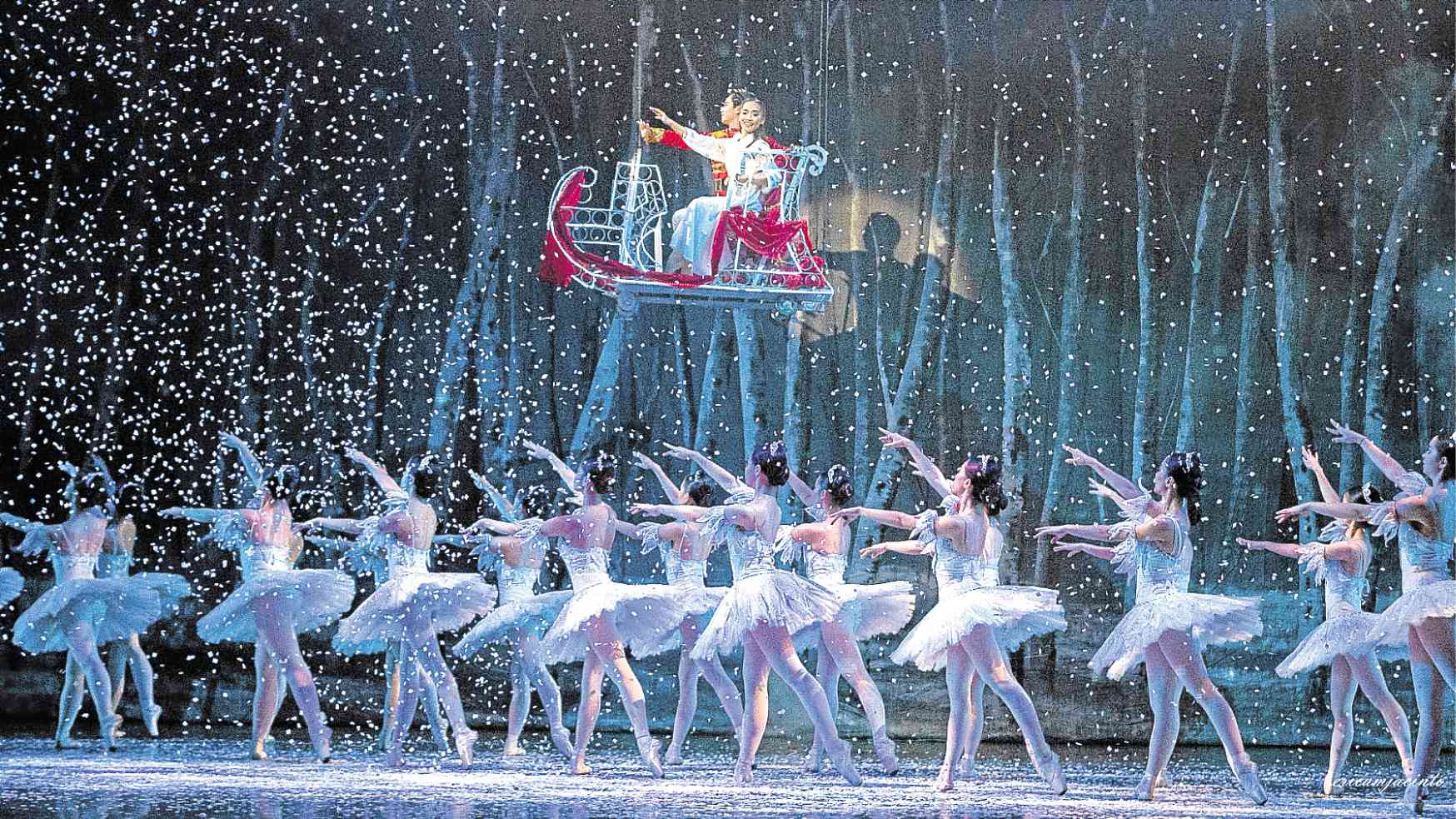 The gloriously resplendent sets, the atmospheric fog, delicate falling snowflakes, the flying sled, Tchaikovsky’s moving score and the cast of nearly a hundred in “The Nutcracker” never fail to hold audiences spellbound. Every year, the packed Main Theater at Cultural Center of Philippines is the reward for Philippine Ballet Theater’s (PBT) season of hard work.

PBT’s version of “The Nutcracker” is traditional—Clara, the young heroine, goes through a journey into dreamy landscapes.

On Christmas Eve, the Silberhaus holds a party. Toymaker, magician and Clara and Fritz’s Silberhaus’ godfather, Herr Drosselmeyer, arrives. He presents the wooden Nutcracker soldier to Clara but Fritz grabs it and accidentally breaks it. Still, Clara nurses the broken Nutcracker.

After the party, the mice appear in the living room and fight the toy soldiers, led by the Nutcracker. The soldiers win and the Nutcracker is transformed from doll to Prince/Cavalier. He takes Clara through the snowy forest to the Land of Sweets, dominated by the Sugar Plum Fairy.

It’s been said that the technical standard of the company is reflected in the corps de ballet or ensemble dancing. Every year, PBT has to recruit students from dance schools to play the toy soldiers, rats, dolls, Mother Ginger kids, angels, party children, snowflakes and flowers. The most crucial ensemble pieces, “Dance of the Snowflakes” and “Waltz of the Flowers,” were well-applauded for precision and beautiful body lines.

PBT’s soloists showed secure technique. The petite Loby Pimentel as the Sugar Plum Fairy was a dynamo. Her elegant carriage and fully-stretched limbs made her look longer onstage. She astonished the crowd with her technical confidence, be it in her multiple pirouettes or the crisp beatings of the feet.

Matthew Davo, the Nutcracker Prince/Cavalier made a good partner in the difficult but seamless maneuvers. Everybody clapped when Pimentel jumped on his shoulder and when he lifted her overhead. His aerial turns and landings were tidy.

The lyrical Kim Abrogena floated in her rendition of the Dew Drop Fairy.

Ana Mikaela Samson and Kazier Policarpio pulled off the difficult, slinky partnering with ease in “Arabian Coffee.” Samson danced like a snake slithering down her partner’s back.

Marika Desembrana and Crimson Guirjem were sprightly and playful in the Chinese tea dance.

In the Russian Trepak (folk-inspired dance), Dominador Delmo and Renne Garcia performed with high energy and effortlessly rebounded in their split jumps while Veronica Atienza dazzled with her fouettés or whipped turns.

PBT’s long-time ballet master Anatoly Panasiukov has always been charming as toymaker and magician Herr Drosselmeyer without going over the top. His movements hint at the artistry of his Russian training.

We would have enjoyed this production more if the children in the party scene were more spontaneous in showing the excitement of Christmas; the boys could be naughtier; Regina Magbitang, as Clara, could be more fluid and show nuanced girlishness. Still, the heartfelt production made everybody feel good. —CONTRIBUTED