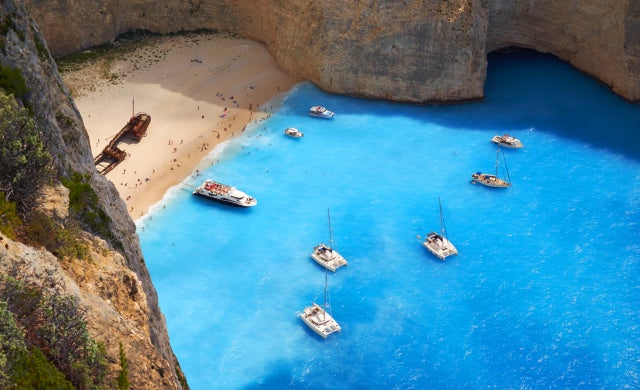 A beach in Greece that will be instantly recognizable to fans of K-drama tops a new list of the world’s best 100 beaches, as voted by journalists, editors and bloggers from around the world.

For its list of world’s best beaches, airfare agency FlightNetwork tapped 1,200 travel experts around the world on their picks for the most beautiful, postcard-perfect beach destinations around the world.

The slice of paradise takes its rather ominous name from the rusty remains of the shipwrecked Freightliner MV Panagiotis, which sits anchored against towering golden cliffs in the hidden cove.

FlightNetwork says the beach has become increasingly popular in recent years, but fails to mention that the most probable reason for the spike in visitors can be traced to its starring role in the hit 2016 K-drama “Descendants of the Sun.”

The beach served as one of the backdrops for the main characters’ improbable romance in the fictional country of Urku.

The 16-episode drama broke viewership records in South Korea, with nearly 40 percent of the country watching its final episode in April 2016. The series was also wildly popular in other Asian countries and among K-drama fans around the world.

The rest of the list features beaches in the Philippines, Hawaii, Thailand, Turks and Caicos, Chile, Micronesia and the Bahamas, among others.

Here are the top 10 beaches:

Hidden Beach is in El Nido, Palawan which is composed of islands and islets and is known for its massive limestone cliffs. It was in the 14th spot in last year’s list. NVG