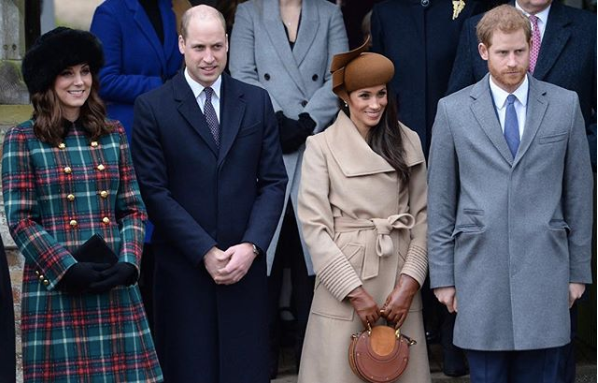 Kensington Palace has made a rare statement on rumors of a rift between royal wives Meghan Markle and Kate Middleton.

Kate allegedly told off Meghan for scolding her staff at Kensington Palace, The Sun reported on Dec. 1.

“That’s unacceptable, they’re my staff and I speak to them,” The Duchess of Cambridge reportedly said. The context of the situation or when it happened was not mentioned.

Kensington Palace, as per People on Dec. 3, released a statement about the incident: “This never happened.”

British press have previously reported that the sisters-in-law have had a fallout.

Kate is said to have cried during Princess Charlotte’s dress fitting in the weeks leading up to Meghan’s wedding to Prince Harry, the Daily Telegraph reported on Nov. 26. Meghan was allegedly not happy about how the fitting went and the stress brought Kate to tears, days after she had given birth.

Meghan’s demands were why her assistant Melissa Touabti, who helped plan her wedding, left after six months, The Mirror reported on Dec. 1.

Harry and Meghan’s move to Frogmore Cottage in Windsor after being neighbors with William and Kate in Kensington Palace also fueled rumors of a feud, not between the two women but rather their husbands.

A friend of the princes allegedly told Vanity Fair in a Nov. 26 report that Harry had clashed with his older brother for failing to “roll out the red carpet” for Meghan last Christmas. Prince Charles is said to have spoken to William about the issue, which led to Harry and Meghan spending Christmas with the Cambridges.

Another source mentioned too that although Kate and Meghan are different from one another, they have tried to get along.

Other sources have pointed to less dramatic factors on the move, such as more privacy for the newlyweds who are expecting a child next year. Another is that Harry is looking to break from his brother’s shadow and is seeking new duties with his wife, considering that he has spent years working with William and Kate.

Palace spokespersons have yet to comment on the rest of the rumors. The two couples, as per People on Dec. 3, will spend Christmas together with Queen Elizabeth II in Norfolk. Niña V. Guno/JB

With child coming, it’s off to Windsor for Harry, Meghan