Banksy's works on show in Madrid without his approval | Lifestyle.INQ ❮ ❯ 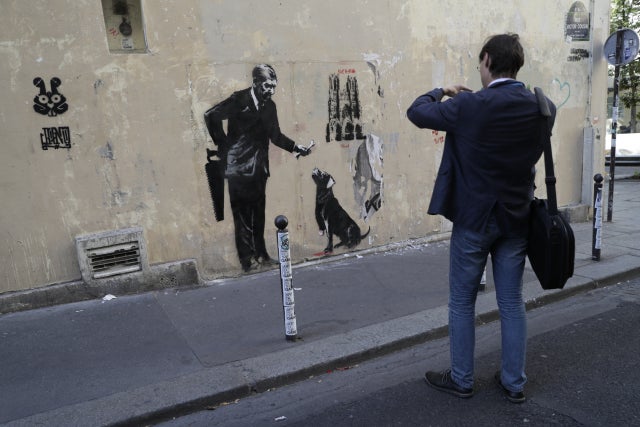 Though Banksy remains something of an enigma, the dark wit of his art and a certain talent for self-promotion has helped him build up an international reputation, to the point that his works have fetched more than a million pounds. Image: AFP/Thomas Samson

Banksy has been Banksied. The guerilla artist who puts up his work in public spaces without asking authorization is the subject of a new show in Madrid featuring his works — without his authorization.

“Genius or Vandal?” opened Thursday at the Ifema center in the Spanish capital and will run until March 10.

It has already pulled in half a million visitors at its previous venues Moscow and Saint Petersburg, according to a statement from the organizers.

The show’s curator Alexander Nachkebiya, who assembled the works from private collectors, describes Banksy as “a phenomenon and one of the most brilliant and important artist of our epoch.”

The street artist himself remains something of an enigma. All he has revealed about himself is that he is British and that his home town is Bristol in southeast England.

But the dark wit of his art and a certain talent for self-promotion has helped him build up an international reputation, to the point that his works have fetched more than a million pounds.

In August, Banksy used his Instagram account — 5.1 million followers — to make his position clear on the original Moscow show.

He posted an exchange of messages between him and a follower who tipped him off to the unauthorized exhibition.

But at the suggestion that he put out a statement denouncing the fact that it was made to look like an official show, he replied: “…not sure I’m the best person to complain about people putting up pictures without getting permission.”

Nevertheless, his website does carry a message warning visitors about this and other shows. “They’ve been organized entirely without the artist’s knowledge or involvement. Please treat them accordingly.”

In the meantime, his subversive style continues to attract admirers.

His most recent stunt was at the October auction of one of his works, “Girl with Balloon”, at Sotheby’s in London.

Moments after it sold for £1,042,000 — a joint record for the maverick artist — it unexpectedly passed through a shredder hidden in the frame.

Only partially destroyed, the buyer went through with the purchase and some art experts said it was probably now worth more than it had been before the stunt. CC